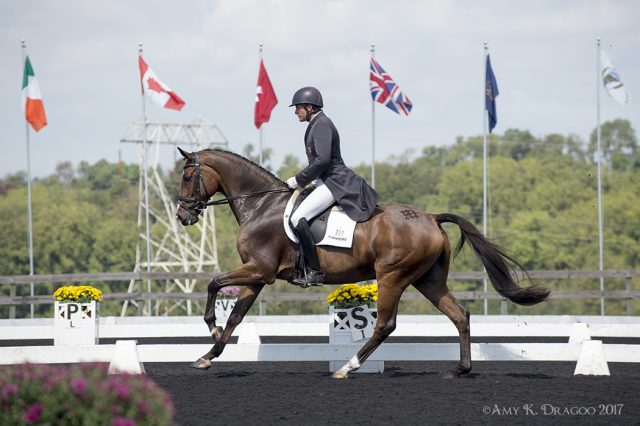 Boyd Martin is straight up dominating Plantation Field International Horse Trials at the conclusion of dressage, leading both CIC2* divisions and also cruising to the lead with Long Island T today on 40.1 in the horse’s CIC3* debut.

Long Island T, an 11-year-old Oldenburg/Thoroughbred gelding owned by the Long Island T Syndicate, had a rather inauspicious start to his new partnership with Boyd when he took over the ride from Peter Barry late last year.

Peter produced “Ludwig” to the two-star level, and Boyd decided to unveil his newest upper-level prospect by taking him to the $100,000 Wellington Eventing Showcase in January. A maxed out show jumping course resulted in elimination, sending Boyd back to the drawing board with Ludwig.

Boyd opted to start from scratch, taking the horse back to Training level to rebuild a foundation for their partnership.

“I got taught a very valuable lesson not to go too quick with a horse. It forced me to go back to the beginning with him. He’s a very different ride from what I’m used to, especially in the jumping,” Boyd said.

“Phillip Dutton has helped me tremendously with the cross country, and Richard Picken has been a huge help with show jumping. It just started to click into gear at Richland Park. It’s not quite perfect, but he’s at the level now and I think he could be a big-time horse for the future.”

If what we saw today is any indicator, Ludwig is absolutely an exciting horse for the future, delivering a polished performance in his first three-star test to best a field chock full of four-star veterans.

“It’s taken this long to learn how to operate him,” Boyd said. “He’s a fantastic mover and has been produced beautifully by my good mate Peter Barry. I’m very pleased I could execute some of the work I’ve been getting at home.”

Boyd’s leading performance was made all the more special by the fact that Peter is here at Plantation Field this weekend and watched Ludwig’s test. He is making huge strides in his recovery from a stroke, and we are absolutely DELIGHTED to have him in Pennsylvania this week.

While Boyd has won many prestigious three-star events across the U.S., a win at Plantation Field, his “hometown” event just 15 minutes from his base in Cochranville, has eluded him in the nine previous runnings of the CIC3*.

But Boyd made it clear this competition with Ludwig is all about continuing to build on their partnership, so a win is far from his mind. “He’s still a bit too green to go quick on cross country. The plan is to give him a nice, cautious ride around and keep building on what we started.” 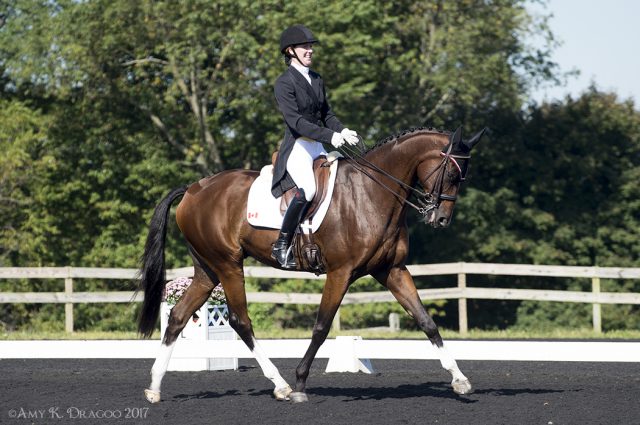 A win in the CIC3* at Plantation Field has eluded Canadian riders since the inception of the event in 2008, and Selena O’Hanlon would love to change that this weekend. She’s off to a cracking start, sitting in second place on 41.8 with Foxwood High, just 0.5 penalties out of the lead.

Selena has also been training intently with Canadian Olympic dressage rider Christilot Boylen and showing Woody in pure dressage shows at Palgrave. “He’s been building toward this,” she said. “In the walk he is finally starting to relax. I feel like I could show him off so much more. … He tried and listened and didn’t put a foot wrong.”

We’d be remiss not to mention that Woody was absolutely sparkling thanks to the meticulous care and attention to detail of his groom Anne-Marie Duarte, whose handiwork especially shown through in his beautiful quarter marks. Massive shout out to all the super grooms!

Looking ahead to tomorrow’s show jumping, Selena said she feels confident in her ability to deliver a clear round, in large part thanks to training with Captain Canada himself Ian Millar, as well as Jonathon and Amy Millar. “They are a lot like the Davidsons — very generous in their knowledge,” she said. 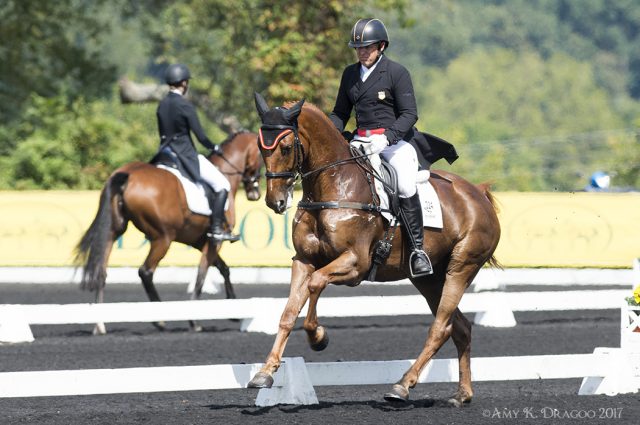 Boyd Martin may be dominating the competition as a whole, but Buck Davidson is positioned very strongly in the CIC3* with two horses in the top five. Copper Beach, an 11-year-old Irish Sport Horse gelding owned by Carl and Cassie Segal and Sherrie Martin, scored 42.3 to sit in third place. Carlevo, a 10-year-old Holsteiner gelding owned by Carlevo LLC, scored 42.8 for fourth.

“Copper Beach is a horse that doesn’t do anything amazing, but he is the most competitive horse because he goes in there and wants to win,” Buck said. “He never feels very good in the warm-up — he hates other horses around him — but he knows to go in the ring and do his job. I can always rely on him. He doesn’t get 9’s, but he doesn’t get any 6’s either.”

Buck has been back home in Unionville for about a year now, and he said the rolling hills surrounding the venue at Plantation Field have totally changed the fitness program for his horses. “It’s a huge advantage,” he said. “They are fitter and stronger, so I’m looking forward to (cross country on) Sunday.”

This weekend is a key prep run for Copper Beach, as Buck is aiming him for Les Etoiles de Pau CCI4* in France next month. While the horse has two wins at CCI3* level at just 11 years old, Buck has even bigger wins in sight for “Sean.”

“To win a CCI4* we have to get that little bit better,” Buck said. “I tried a different bridle for show jumping at Richland Park. Today we were playing around with no flash (on his bridle) in dressage. I want to fine-tune everything so when we go to Pau we’re really ready. He deserves the chance.”

It’s an all-star top five here at Plantation Field, with Phillip Dutton and HND Group’s Mighty Nice sitting in fifth place on 44.3 in the horse’s first competition back since winning an individual bronze medal at the 2016 Rio Olympic Games.

The top five is all-important in large part because every winner in the history of the CIC3* at Plantation Field has come from inside the top five after dressage. Here’s a look back at all of the winners in previous runnings of the Plantation Field CIC3*, plus their final finishing scores courtesy of EquiRatings:

While our focus will naturally fall to the rider who goes on to win the competition, eventing ultimately isn’t a sport defined by winning. Ours is a sport that champions the journey — the long days, the lack of sleep, the incredibly hard work and ultimately the fleeting moments that culminate in a dream realized.

We saw five combinations make their way down centerline in their CIC3* debut today: Erika Nesler with Right Above It, Fylicia Barr with Galloway Sunrise, Lindsay Beer with El Paso, Cornelia Dorr with Louis M, and Liz Stewart with Elusive. They all delivered polished performances that should leave their families, friends and teams incredibly proud tonight.

Eventing is also a sport of personal victories. Sara Moore had her test of a lifetime today aboard Polaris, a horse she never gave up on in dressage when she had every reason to call it quits. She piloted him to a score of 57.3 today, a personal best for the pair at CIC3* level and their third best test at any FEI level since they started their partnership more than five years ago.

Perseverance comes in many shapes and forms. From our CIC3* leader, who took a top horse back to Training level to ensure no stone was left unturned, to a rider who never gave up on believing she could get that elusive qualifying score, we have a lot to smile about here in Unionville tonight.

Looking to the other divisions, CIC2*-B dressage concluded with Boyd Martin retaining the leading on the Shamwari 4 Syndicate’s Shamwari 4 with his career best FEI dressage score of 33.8. Lynn Symansky piloted the Donner Syndicate’s RF Cool Play into second place on 39.7. Jessica Phoenix and Don Good’s Bentley’s Best sit third on 40.6.

In the CIC* Young Rider division, Cornelia Dorr and her own Sir Patico MH sit first on 41.6, with Dasha Ivandaeva and her own Valentina tied for equal second place on 42.8 with Alexandra Tett and her own Quiproquo des Vatys. A special shoutout goes to Schramm Equestrian super groom Emily Lehman in her CIC* debut with Martial Arts, her own Thoroughbred she produced from Beginner Novice level, sitting sixth on 49.1.

If you missed watching CIC3* dressage live on USEF Network, be sure to tune in tomorrow at 2:20 p.m. EST for show jumping. Cross country will also be shown live at 12:55 p.m. EST on Sunday. Click here to watch the live stream. Go Eventing. 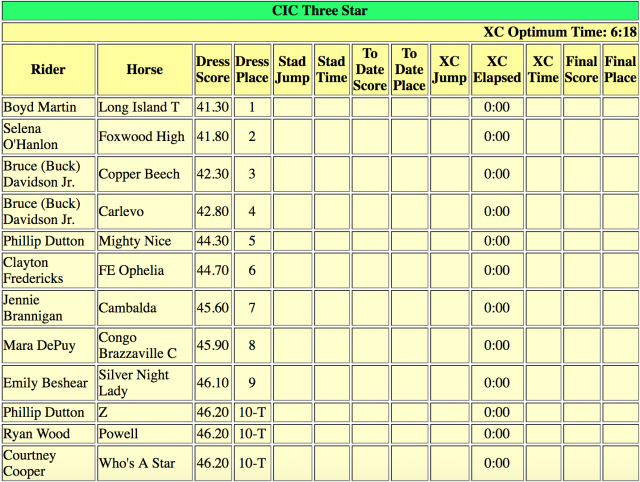