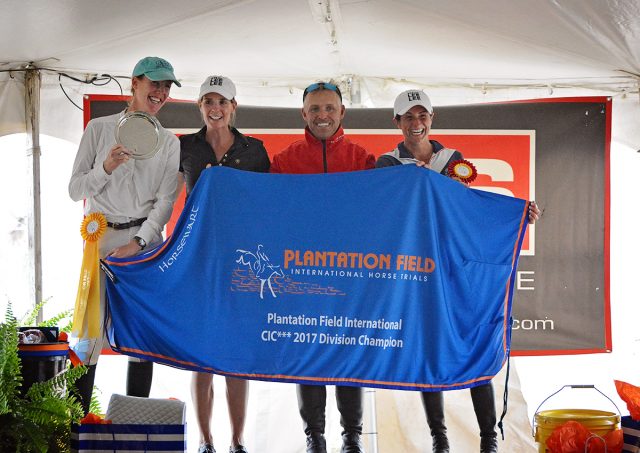 Evie Dutton, second from left, presents the CIC3* cooler to winner Buck Davidson, with Jennie Brannigan (2nd) on the right, and Selena O’Hanlon (3rd) on the left. Photo by Jenni Autry.

Buck Davidson left the start box today at Plantation Field International Horse Trials on a mission. As the overnight leader after show jumping in the CIC3* with Copper Beach, he could afford to be five seconds over the time but no more than that after Jennie Brannigan and Cambalda set a blistering pace to put the pressure on.

And go he did, tearing out of the start box with “Sean,” an 11-year-old Irish Sport Horse (Radolin X Cloverballen) owned by Sherrie Martin and Carl and Cassie Segal, coming home 12 seconds inside the time to clinch the win on a final score of 43.3. 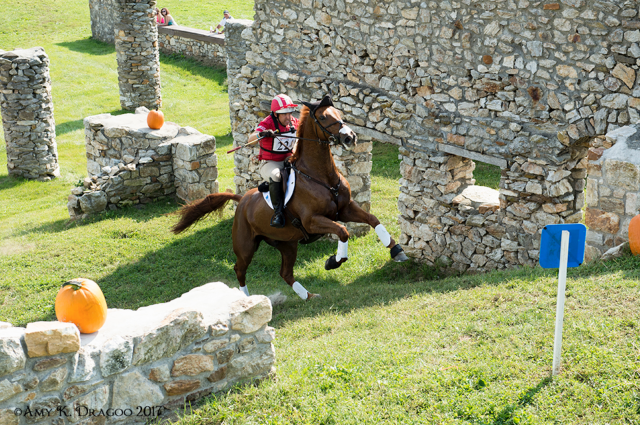 Buck Davidson and Copper Beach galloping up the hill at The Ruins. Photo by Amy Dragoo Photography.

“He’s matured now, and he’s still a young horse. I’ve been very fortunate to have (Carl), who let’s me do what I needed to do. We didn’t go fast on cross country (with Copper Beach) at all until he was 10. … The most important thing is to keep them sound.”

Buck and Carl plucked this horse from the Goresbridge Go For Gold Sale in Ireland as a 5-year-old, and while he’s won CCI3* titles at Jersey Fresh and Rebecca Farm, there was something extra special about taking the win today at Plantation Field, which is just across the road from the Davidsons’ hallowed Chesterland Farm.

“It’s a great feeling because Buck has worked so hard with Sean,” Carl said. “They have similar personalities in that they both try so hard. No matter what, they are going to give it their all. They may sometimes surprise you. They are not always picked to win, but they sure do win a lot.”

Touché, Carl! EN tapped Jennie Brannigan and Tim and Nina Gardner’s Cambalda to win, and they ultimately settled for second place with flair, storming around 21 seconds inside the time to secure the fastest time of the day on a final score of 45.6. 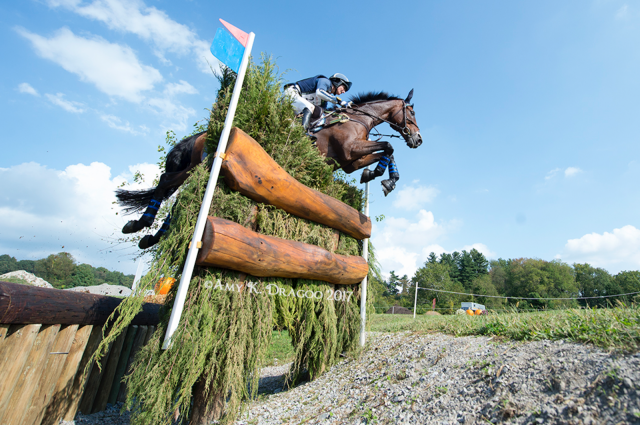 “I didn’t mean to go that fast!” Jennie said, but it’s no surprise that she set out at such a determined clip following their most recent run at the American Eventing Championships. After breaking her hand in show jumping warm-up at the AECs, Jennie had to pick a slower pace on cross country with “Ping,” a 15-year-old Irish Sport Horse (Balda Beau X Cathy’s Lady).

“I was in a fair bit of pain at the AECs on the Sunday, and I didn’t go fast enough to win. The Gardners were saying, ‘You don’t have to ride!” even though they had three horses in the top three, and I was upset that I couldn’t go fast enough. I was thinking about that today going out of the box.”

Ping’s second-place finish today preserves his nearly 90% rate of finishing in the top five at CIC3* level. “There are so many feature events now that make it possible for a horse like that to have a very cool career,” Jennie said. “He didn’t want to play at the (CCI4*) level, and he doesn’t need to play at that level. He’s a wonderful CIC horse.” 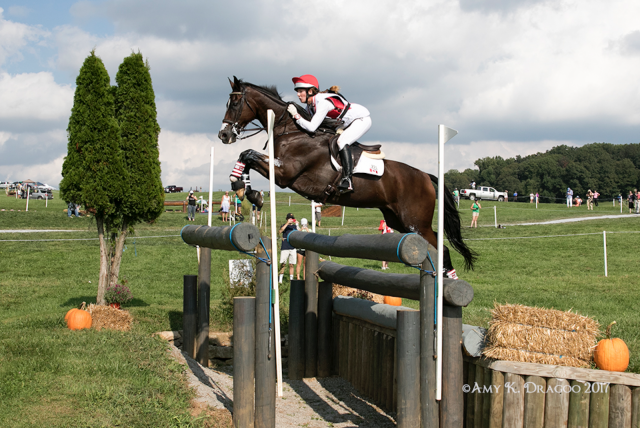 Selena O’Hanlon and John and Judy Rumble’s Foxwood High were also one of the five combinations to make the optimum time of 6 minutes, 18 seconds on Mike Etherington-Smith’s CIC3* course, securing third place on 45.8.

Ever the perfectionist, Selena was quick to point out that her rail in show jumping ultimately cost her the win, but it’s only fueled the fire as she looks ahead to competing “Woody,” a 14-year-old Canadian Sport Horse (Rio Bronco W X Evita II xx), at the Dutta Corp Fair Hill International CCI3* next month.

“I’m going to work on my show jumping and give it another try,” Selena said. “I always hope it’s a more difficult cross country so I can move up the leaderboard more, but it was definitely a great test of his fitness.”

As for what Woody’s owners, 1956 Canadian Olympian John Rumble and his wife Judy, thought of the result: “Cross country at this level is always a test. My owners are elated. They are over the moon!”

As has become the trend on Mike Etherington-Smith’s course since he took over as designer in 2015, time penalties have proven to be far more influential than jumping penalties — 86% completed the course without jumping penalties, but only 12% of starters made the optimum time.

Phillip Dutton and the Z Partnerhip’s Z held the provisional lead for much of the afternoon after jumping out of order early on in the order of go, picking up 4.4 time penalties to finish fourth on 50.6. Mara DePuy and her own Congo Brazzaville C jumped clear with 5.2 time penalties to finish fifth on 51.1 in their best result since moving up to the Advanced level this season.

Will Coleman and Kathleen McDermott’s Boris O’Hara impressed across all three phases, delivering a personal best in dressage, one of the 11 clear rounds inside the time in show jumping, and crossing the finish clear on cross country with 4.8 time penalties to finish sixth on 51.2.

Buck Davidson is one of three riders to finish two horses inside the top 10, jumping clear with 5.2 time penalties on Carlevo LLC’s Carlevo to place seventh on 52.0. Phillip Dutton, who sat in second place after show jumping with HND Group’s Mighty Nice, stuck to his plan to pick a conservative pace in the horse’s first run after Rio, accumulating 8.0 time penalties to finish ninth on 52.3.

Five combinations in all caught the optimum time on Mike Etherington-Smith’s course. Aside from the top three finishers, Colleen Rutledge and her own Covert Rights were the first to catch time to finish 27th, followed by Tim Bourke and Luckaun Quality to finish 23rd.

We followed the three-star debutantes closely this weekend, and we’re pleased to report that four of the five first-timers completed cross country today. Erika Nesler and Doug and Cindy Howe’s Right Above It led the way for the rookies, picking up just 1.2 time penalties to finish 13th on 60.3.

It’s been a wonderful weekend at Plantation Field, and we are indebted to the organizers, officials and most of all the volunteers for putting on a wonderful event in Unionville, Pennsylvania. If you missed watching the cross country finale live on USEF Network today, the broadcast will be available on demand very soon. Go Eventing. 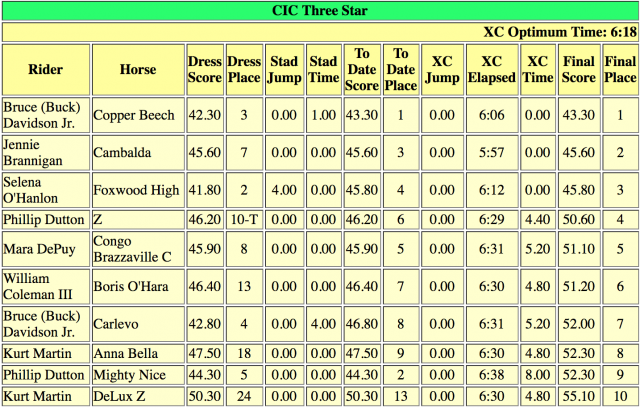