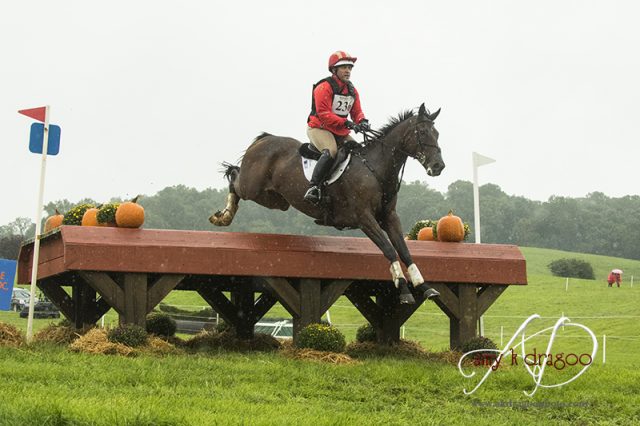 In the end, the steady, depressing rain meant that everything was made up and the points don’t matter. (*See clarification below.) Time penalties shuffled the leaderboard around drastically and at the end of it, Buck Davidson ended up as the winner for the second year in a row, this time aboard Archie Rocks, Maya Simmons’ 10-year old Thoroughbred gelding. The result was such a surprise that even Buck was unaware of his win when called for quotes; his response was to ask which horse won.

Archie Rocks, who was enjoying himself out on the wet course more than most of the others, rocked home with 8.4 time penalties, which earned him the win on a day when most other horses clocked in time penalties in the double-digits.  Buck wasn’t sure about going for time, but upon asking his crew in warm-up what the finishing times were, decided to take the Thoroughbred gelding a little quicker to try and get a little closer to optimum.

“I was first to go (with Erroll Gobey) in the class, and it felt very good. But Archie’s a little Thoroughbred.  I had to pick and choose different lines and give him best line I could.”

“I was a bit mad when I finished because he went too quick the first couple then kind of stumbled then sort of started backing up when he got tired, and I had to add a couple strides here and there, and I thought, ‘If I lose this thing because of that, I’m gonna be really mad’. I didn’t think I would win but I knew I would be up with a chance.”

“A lot of talk about the scoring changes, but I honestly think putting the emphasis back on cross-country and the show-jumping, people aren’t going to spend so much time practicing the extended trot. They’ll practice jumping and getting quicker and therefore being safer. It’s fun when the cross-country means something. I think it was a relatively safe day and came down to how fast did you want to go.”

Buck says Archie Rocks will head to Fair Hill CCI3* to finish off the eventing season, likely joined by his stable-mate Erroll Gobey. Buck also wanted to make sure to thank his crew of Jessica, Patrick, and Hannah, who made all of this possible and helped him gauge the times of the rest of the field from the box. 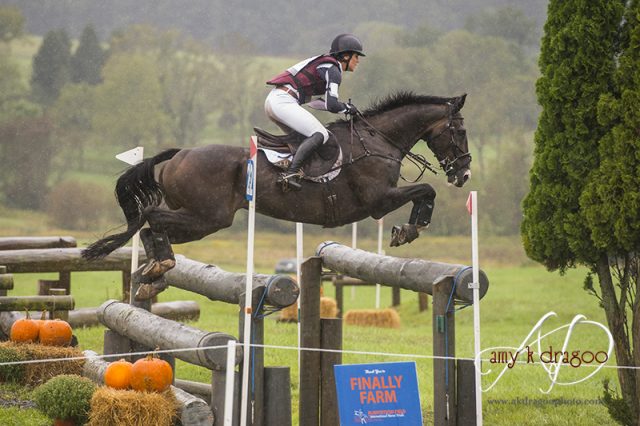 Ariel Grald, who was sitting in fifth after the stadium, clocked in 14.4 time penalties with Leamore Master Plan to clinch second place. Although thirty-six seconds over optimum seems like a lot of time, it was actually the fourth fastest ride of the day. The 9-year old Irish Sport Horse owned by Anne Eldridge looked particularly stellar out on cross-country, thriving in the wet and muddy conditions.

“I’m lucky that my horse is a good Irish boy and the mud doesn’t bother him. He’s very strong cross-country horse and I have to just let him settle into it. He fought for everything and really took care of himself, and took care of me, and I had plenty of gas left at the end of it so I was able to gallop home.”

“With the footing, and I could see that we’d had a lot of rain, I knew it (the conditions) was deteriorating out there. The riders were starting to ride off the tracks, and you just had to pick your way through and find the best footing. My main focus to prep for future events was just to have a clear round, but the second half of the course really allowed you to gallop on a bit. My horse had settled once we got through the first few combinations and I was able to let him go.”

Leamore Master Plan is another aimed at Fair Hill CCI3* this fall. 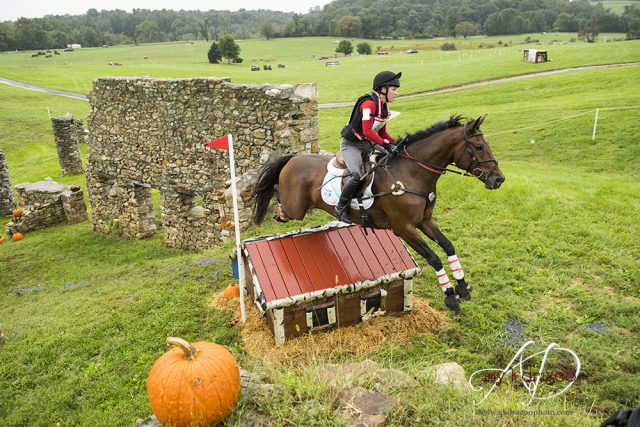 Fylicia Barr and Galloway Sunrise made a huge run up the leaderboard, going from tied for 27th to finishing in third. The 10-year old American Warmblood, owned by the rider and her mother Shannon Barr, clocked in the fastest ride of the day, coming in only fifteen seconds over optimum time. Fylicia and her mother found the horse in a Craiglist ad as a youngster, and their partnership has paid off in huge dividends with her best 3* finish and second best career FEI finish this weekend.

“She’s been going great these past few months. I was really excited to come here because I felt like we were really prepared and we had done this course last year. When I saw the rain I wasn’t that worried — she’s a horse that’s very naturally balanced and the footing doesn’t really bother her. Honestly, we started out and the footing felt fine for us. They’ve done a great job maintaining it all day. I was one of the lucky ones to go a little earlier in the day, but I did feel like they had done a great job making sure it was safe for us to go.”

“The course rode really well. I got a couple sticky distance here and there, and she just kept her cool. She’s just a total competitor. She came through the finish flags and was looking for the next fence. She was ready to go again. All the combinations rode really well for us. She’s just really showing her experience now. Cross country has always been her favorite. Her ears are pricked the whole time, and she’s just hunting the flags, so that’s a really great feeling as a rider to sit on a horse with that much heart and that much competitive drive.”

Hometown favorites Phillip Dutton and Sportsfield Candy added 20.0 time penalties to finish in fourth place while Will Faudree and Pfun rounded out the top five after incurring 18.0 time penalties. 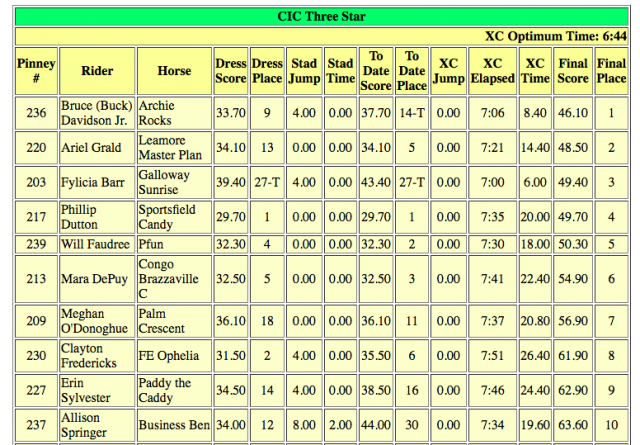 The EN crew would like to give a huge thanks to Cindi Cauffman in control, who kindly fed the livestream finishing times as the horses came in. Another massive thanks to Dylan Barry and Tommy Neneman, who worked incredibly hard to lay down footing every other horse. Finally, a huge thanks to all our volunteers, who came out to help in the cold rain all weekend. 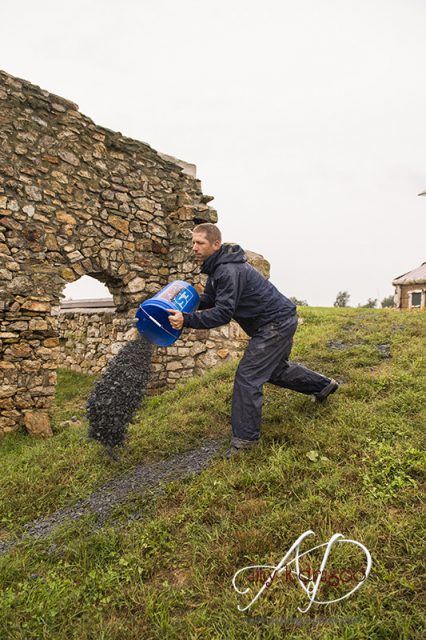 (* “Everything’s made-up and the points don’t matter” is a reference from a popular American comedy show called Whose Line Is It Anyway? where four comedians receive points on a fairly arbitrary basis for being particularly funny in skits. It was used in as a humorous reference to the fact that in the end, this competition was not a dressage or show jumping competition and all the previous discussion of those phases essentially didn’t matter as cross-country came down to the rider’s ability to get it done on a wet cross-country day. It was a true test of cross-country ability yesterday and in a sport where sometimes cross-country has become an afterthought, Buck Davidson was the only rider who gritted the conditions to bring not just one but two horses home clear and well-deserved the win.)