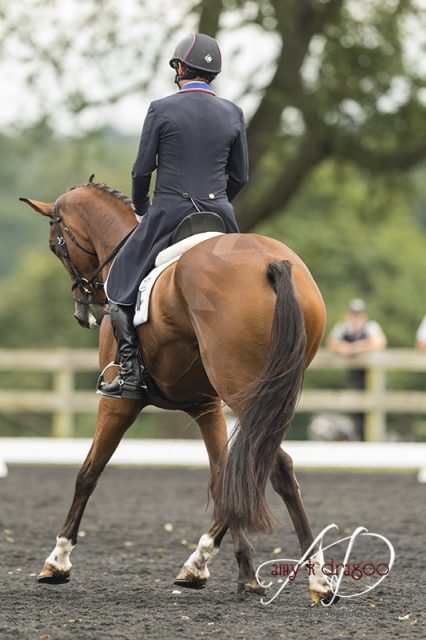 One Kentucky winner gave the other a good run for his money today in the Plantation Field CIC3*, with Clayton Fredericks almost catching Phillip Dutton on FE Ophelia in dressage. With only seven riders left to go, Clayton entered the ring on the 11-year old Zweibrucker mare to lay down a 31.5, good enough for second but leaving Phillip Dutton and Sportsfield Candy in first by almost two points.

Owned by Diana Crawford and Hugh Wrigley, FE Ophelia will be aimed at the CCI3* at Fair Hill this fall; Clayton would have liked to take her to Ocala but being the designer of the course there prevents him from competing himself. FE Ophelia sat out the spring, and Clayton is relieved to be competing her again.

“It’s nice to have her back out. She’s really matured and getting established now at this level. There were a couple little blips, but all the pieces are there. She went super well at Fair Hill last year, and it was such a shame we didn’t get to complete. The goal will be to get a good CCI3* qualification at Fair Hill and start thinking ahead to the Olympics.” 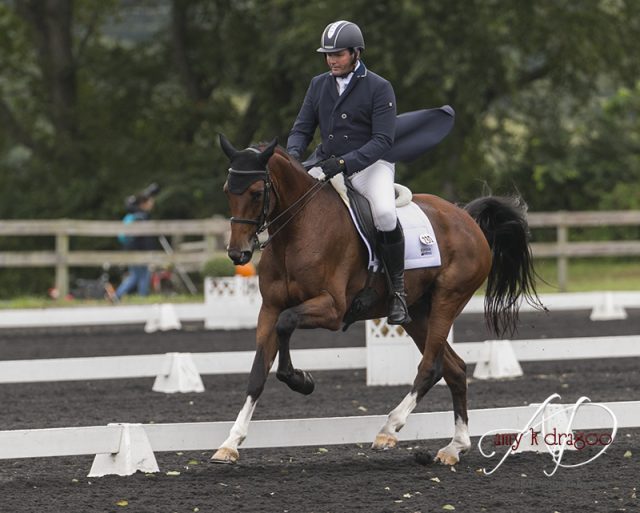 Lord Willing and Allison Springer maintained their position in the top five despite being the second ride of the day, scoring a 31.6 to sit behind Clayton Fredericks and FE Ophelia by only a tenth of a point. Allison felt that the atmosphere got to Lord Willing a little, but that he settled well.

“He was a really good boy today. He was actually a little bit more nervous than he’s been in a while — that’s where you saw him jig in the walk a bit. But what he does well he does so well. He’s such a super athlete. He’s been so fun to work with, but he is pretty nervous. I think it comes from a place of wanting to do it right. He was nervous, but he’s been so reliable in the dressage ring. He used to feel pretty nervous in the show jumping, and now he’s been reliable in there too.” 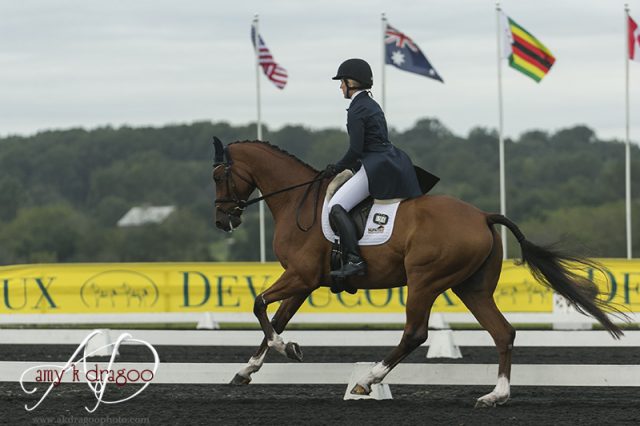 As the final ride of the day, Pfun scores a 32.3 in his first international start since Kentucky of 2017, sneaking into fourth with Will Faudree. Mara dePuy and Congo Brazzaville C round out the top five with a 32.5.

Matt Flynn and the Flynn Sporthorses LLC’s 9-year old Dutch horse Wizzerd score a personal best of 32.6 to finish the first day in sixth position. Buck Davidson and Erroll Gobey, owned by Cassie Segal, Lisa Darden, and Natalie Sandler, scored 33.1 to finish in the top seven despite being the first ride of the day. 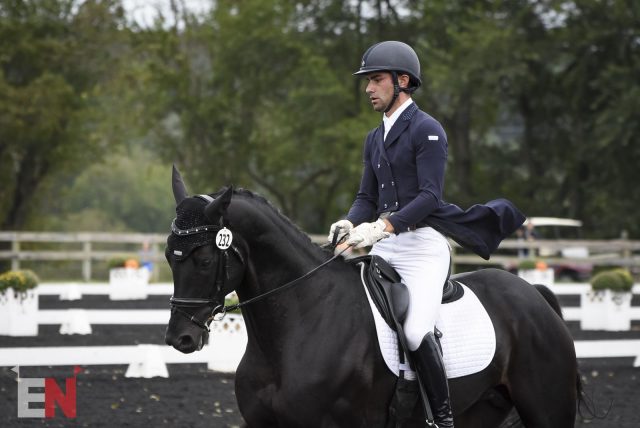 Young stallion Sandro’s Star and Chris Talley cracked into the top ten this afternoon with a 33.4 to sit in seventh place after trekking out to Rebecca Farm this past summer. Caroline Martin on Danger Mouse and Waylon Roberts on Lancaster are tied for tenth on a 33.8.

With high winds and cool temperatures today, we saw horses struggling with relaxation in both the counter-canter and changes, as well as taking exception to various letters throughout the ring. Phillip Dutton managed to coax a relaxed test out of Sportsfield Candy, elevating the test into the twenties. Despite being a temporary ride with Dr. Kevin Keane on the sidelines, Phillip felt the horse’s natural skills help keep the horse competitive.

“There were a couple of little parts that weren’t as polished, but he is just such a beautiful, rhythmic mover and very correct, so that always helps the score along. It’s been fun to have the ride over the summer while Kevin has been healing from his injury. We’re hopeful he’ll be able to take the ride back after Morven Park.”

“The footing feels fantastic. I like how they changed the start — we have a nice gallop in the beginning which I think is really good for the horses especially in preparing them for Fair Hill. Liam is a very careful horse. Ditches are what he loves the least, and he’s got to jump a lot of them out there. It will be good practice. It looks like a fair course, a great course. Good questions that will preparation that we all need looking forward to Fair Hill.”

Clayton Fredericks also thought the cross-country would be a solid run for FE Ophelia.

“It’s tough enough. I won’t be blistering around at 100 mph. This is an event to set her up for Fair Hill. I’ll be using the hills since it’s good for her physique to give her a good go.”

Caroline Martin returns to the international scene for the first time since her fall at Millbrook with a bang, leading the CIC1*-B division on her own Cristano Z with a 22.8. The 9-year old Zangershiede gelding has stepped back to the one-star level to re-establish form.

Elizabeth Bortuzzo and Belongs to Teufer, a 2009 Thoroughbred owned by John Witte, sits in second on a 24.2 while Sarah Pyne and her own Quintessential, a 10-year old Irish Sport Horse.

Conditions will be perfect for the 1* and 2*, who both do cross-country tomorrow, with overcast skies and a high of 71 degrees F. Note that there is a schedule change for the 2*-B divisions: all two-star divisions will do both stadium and cross-country phases tomorrow, which is a change for the B divisions. All riders for all divisions should check for updated ride times, as the schedule has been updated to account for rain on Saturday night.

Rain has been projected beginning Saturday night and continuing throughout the day on Sunday, so the 3* divisions will have drastically different conditions than they have experienced over the past few years. Stay tuned tomorrow for a full course preview of the three-star!