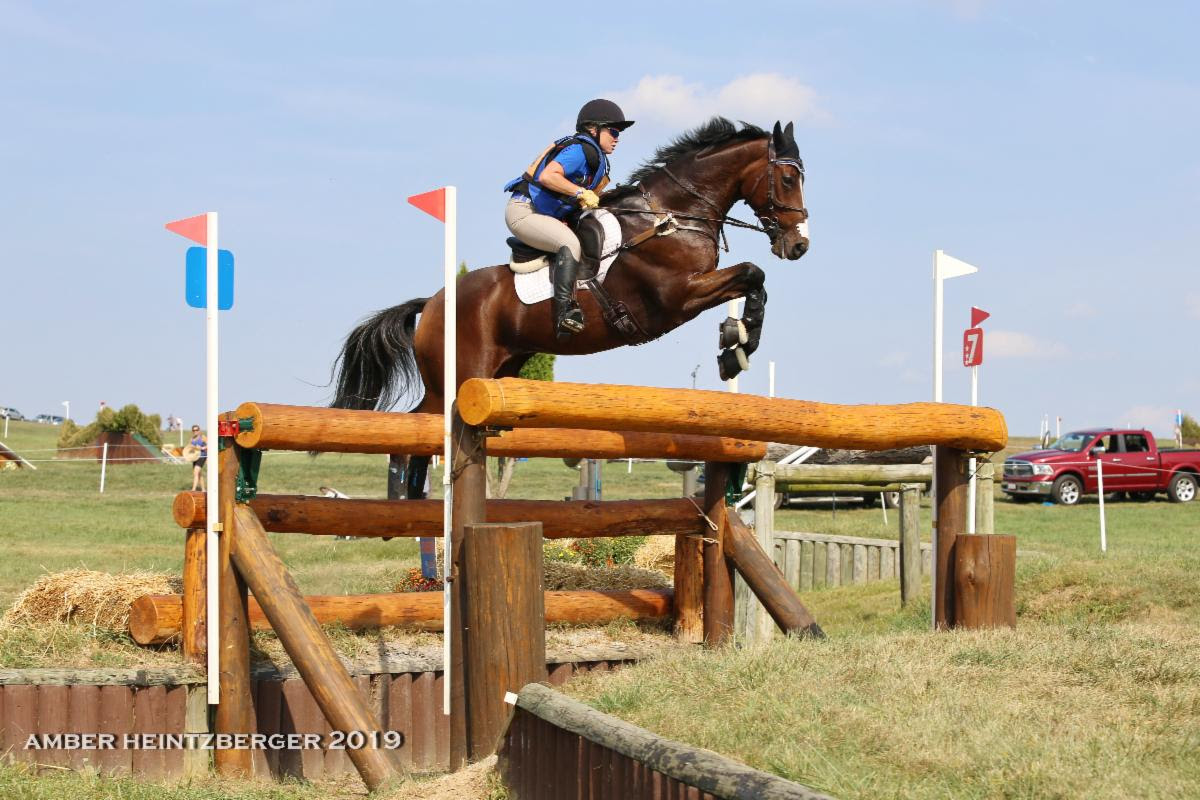 Colleen Rutledge and Covert Rights galloped around clear and in the time to claim victory at the Plantation Field International CCI4*-S today on a score of 30.30.
“He felt like a rockstar,” Rutledge said of the 13-year-old Thoroughbred/Clydesdale cross. “For a very long time he did the cross country because I asked him to, now he does it because he loves it. A trained monkey could have pulled his tail and he’d have gone around today! He’s one of my homebreds, he’s one of my children, so not just to have him back but going the direction I want him to go and feeling the way I want him to feel is indescribable. There aren’t words to describe how happy I am.”
Rutledge used Plantation Field as a fitness test before the Fair Hill International next month and he was one of only two horses to make the time around the four-star course. She said, “I slowed down at the end of the course because I didn’t want to make a cocky mistake; we came through the finish flags and he felt like he wanted to go again!”
Overnight leader Erin Sylvester and Paddy the Caddy had a run-out on course, and added time faults to open the door for Rutledge to win. Sylvester was also held on course when Caroline Martin, who was placed second going into cross country, had a fall at fence 16, the double cabins. Boyd Martin and Bonito also parted company at the same fence.
Will Faudree, Southern Pines, NC moved up yesterday from 15th place after dressage, to 9th after show jumping, to a final second place overall with Michel 223, owned by Jennifer Mosing. Faudree and the 9-year-old Hanoverian gelding also blazed around the course clear and in the time for a final score of 33.40.
“I got him as a six-year-old,” said Faudree. “He won the Bundeschampionat in Germany as a five-year-old, was sold to England and didn’t do anything for a year – I don’t know what happened. He’s big and gangly, he’s like a ‘three men in a horse’ costume and they’re not always facing the same way! Bobby Costello and I have worked a lot on his show jumping; he’s like a big awkward kid, he’s really come together. He moved up to advanced this year and has been really good. He’s all the girls’ favorite in the barn, really sweet and personable, but he’s a little bit of an introvert and needs his quiet time. He’s a horse that you can never tell him what he’s doing wrong, only what he’s doing right, because he gets his feelings hurt quickly. There’s not a malice bone in his body. I also have his half-brother and he’s like a three-year-old boy on a sugar high in a toy store, and Mike is his opposite.”
“This weekend was his personal best in the dressage and there’s massive room for improvement, and he’s only going to get better. I’ve had clear rounds at this level before, but I’d say he jumped the best within himself this time. He’s a super jumper and has a great gallop; my plan today was to go out and see how he felt, and we went for it.”
Fylicia Barr and Galloway Sunrise, an 11-year-old American Warmblood mare that her mother found for $500 on Craigslist, claimed third place on 37.7.  Barr, originally from Western New York State, has been based just down the road from Plantation Field for the past six years.
“My horse is awesome and put in her best test to date,” she said. “She’s experienced at the level now so I wasn’t overly worried about the questions on cross country, I was mostly concerned about giving her a nice clean, fast ride. We were a little off the pace but still pretty quick. She’s just a great horse, if she sees the question she tries to understand and do her best. It’s mostly me just trying to rein her in and not let her get over eager!”
The pair won the Jersey Fresh International in June. Barr trains with Sally Cousins for jumping and with Pierre St Jacques for dressage and said, “They’ve both really helped us get to the next level. We had an easy run at Millbrook and placed 9th at the AEC’s, all with the goal of getting ready for Kentucky in the spring – it will be our first run at the five-star level.”
Eight horses were withdrawn before cross country. Thirteen horses incurred jumping penalties on course, and Shannon Baker and Ballygowan Zeal retired on course. There were four falls on course today: Boyd Martin, Zoe Crawford, Caroline Martin and Shelby Brost. Caroline Martin and Boyd Martin were transported to a local hospital for further evaluation. Caroline has suffered a broken collarbone. There are no horse injuries reported.
Canadian rider Colleen Loach won the CCI2*-S Division A riding FE Golden Eye on their dressage score of 21.50 followed by Lauren Kieffer and Get Gaudi (25.30) and Kurt Martin on 26.00.
In the CCI2*-S Division B, Michael Pendleton, who works as assistant rider to Boyd Martin at nearby Windurra USA claimed first through third places: Contaro, owned by Christine Haugh Turner (24.80); Miss Lulu Herself, owned by Bonnie Stedt (26.80); and Wabanaki, owned by The Dawnland Syndicate (31.0), respectively.
Go eventing.
Plantation Field: Website, Schedule, Entries, Times, Live Scoring, EN’s By The Numbers, EN’s Coverage 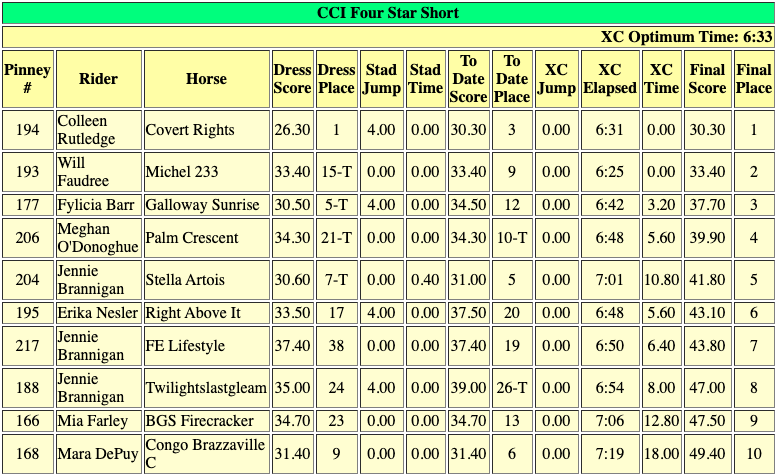