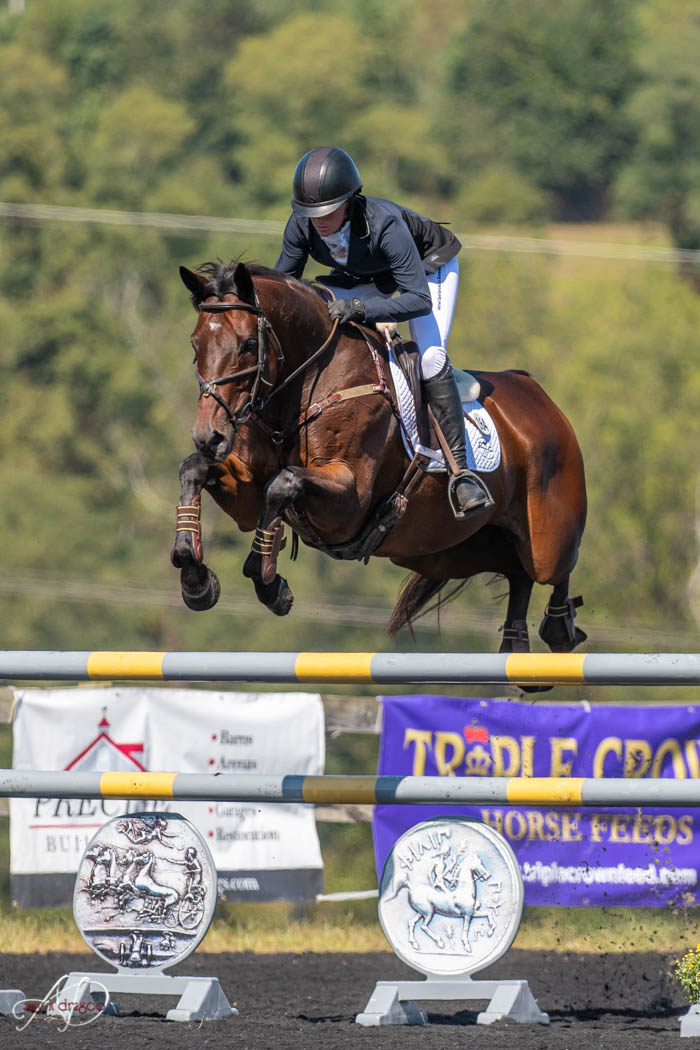 Erin Sylvester and Paddy the Caddy leaped into the lead today with a double clear show jumping at the Plantation Field International CCI4*-S.

“I was really happy with him today; he was jumping out of his skin and was very keen,” said Sylvester, who is based in Cochranville, PA. She said that he is such a good show jumper that she does very little show jumping training during the competition season, instead saving his legs for cross country schooling. “I’ll do a couple jumper shows at the beginning of the season, and then I don’t jump between events,” she said. “I’ll do some cavaletti and exercises to make him rideable.”
Sylvester had a fall on cross country with her CCI3*-S entry Morning Glory, and said that she was feeling bruised and not sure if she would ride cross country with Paddy the Caddy tomorrow.
Overnight leader Colleen Rutledge and her 11-year-old Thoroughbred/Draft cross Covert Rights had one rail down on course (30.1), dropping them to third. Going into the ring Boyd Martin and Bonito, owned by Stephen Blauner, had the opportunity to claim the lead as their 28.2 could have bested Sylvester’s 29.5, but Martin watched it fly away as the gelding knocked two rails out of the cups and he plummeted to 15th place. 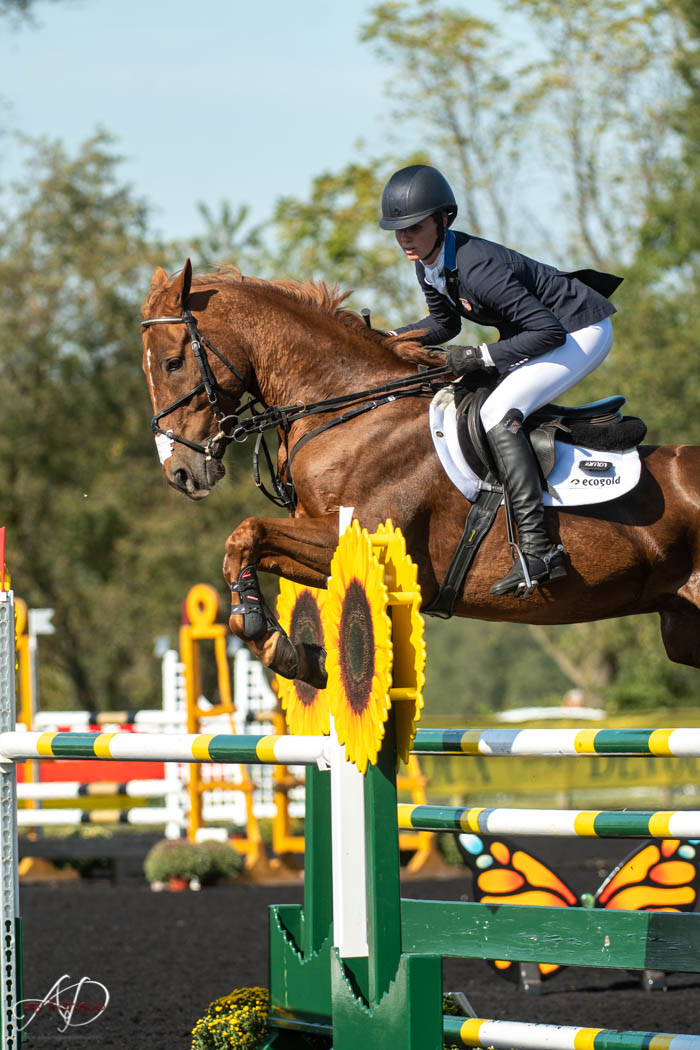 Caroline Martin and her 11-year-old Danger Mouse climbed from fourth into second place (30.1). Boyd Martin had clear rounds with his other two entries and moved up to fourth riding The Z Partnership’s Z, and 7th on Fernhill Singapore, owned by Tom Tierney.
Caroline Martin, Riegelsville, PA has been riding Danger Mouse, who was imported from Germany as a show jumper, since she bought him as a five-year-old. They were recently selected as the reserve for the US team heading to Boekelo in Holland in October, and she is pleased with his performance at Plantation Field as a lead-up to that competition, should they be needed for the team. She said that she has been focusing on his fitness with that in mind.
“I’ve been working with Anne Kursinski in the show jumping and Betsy Steiner in the dressage, and of course with the US team coach Erik Duvander,” she said. “Anne always tucks me under her wing and has helped so much – she had me do a couple of Grand Prix’s this winter, which was great for my riding.”
Two years ago Covert Rights had seven rails down at Plantation Field, so in spite of losing the lead Rutledge, who hails from Frederick, MD said she was pretty happy with his round. “I’m actually really pleased with how he jumped,” she said. “With that rail I knew what happened as soon as it happened and then he picked up and fixed it. I’m pleased with how it’s looking and jumping. In the scheme of things when the horse has been so hit or miss he’s starting to be consistently a one or none rather than 7 here, 6 here…we’re a lot more consistent…I can feel it. It was an unlucky rail, I didn’t have quite enough leg and he slipped behind me just a hair.”
The CCI4*-S culminates with the cross country phase tomorrow beginning at 10am.
Don’t miss a few show stoppers from show jumping today, captured by AK Dragoo Photography: 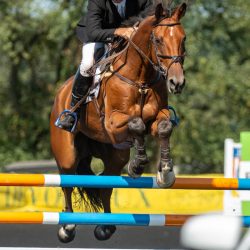 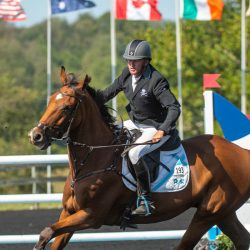 Will Faudree and Michel 233. Photo by AK Dragoo Photography. 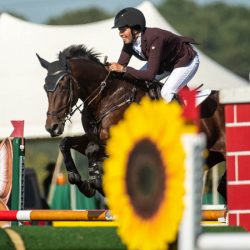 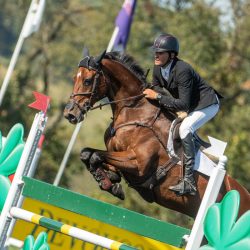 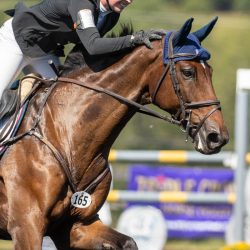 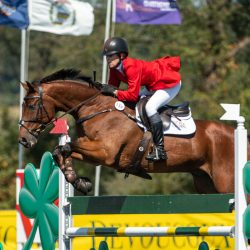 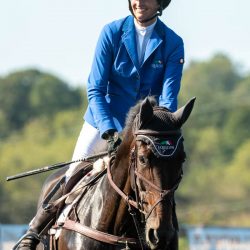 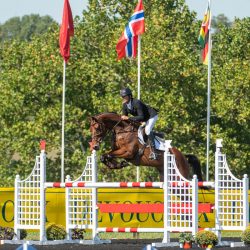 Holly Payne Caravella, Chester, NJ won the CCI3* with riding Charmking, an 8-year-old gray Holsteiner gelding on their dressage score of 26.1. Maya Black and Miks Master C finished second (31.1) and Boyd Martin and Luke 140 placed third (32.5). It was a big division with 75 starters, of which 56 completed the competition.
Caravella said that Charmking recently won at Millbrook (NY) and then competed at the American Eventing Championships, which she said was a good prep for Plantation Field.
“He was pretty perfect in the dressage here: he did a really good test and didn’t make any mistakes. I’ve been trying to get him fitter for the cross country and have been galloping him with my Thoroughbred, Fox, to make him a little faster. I knew that this event would be hard to make the time, because it was very warm this afternoon and he’s such a good jumper that he wastes some time hanging up in the air, but he was really genuine and galloped strong. He had plenty of go left in him at the finish. I think it was a good run before Fair Hill, and we’ll take it easy on him until then.”
Plantation Field: Website, Schedule, Entries, Times, Live Scoring, EN’s By The Numbers, EN’s Coverage 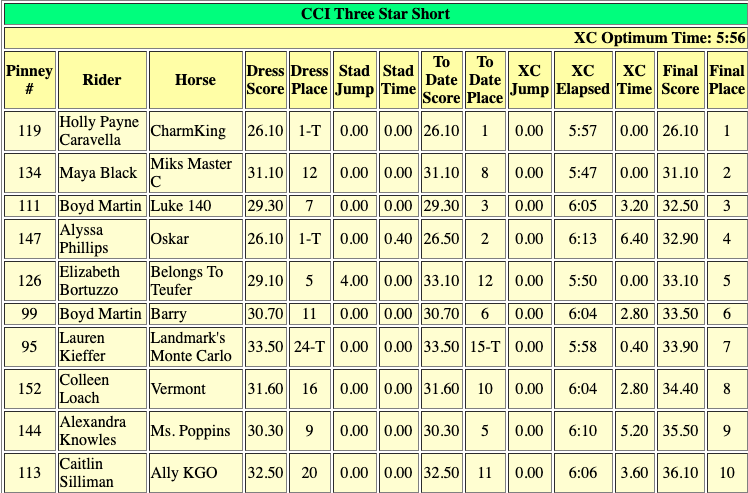 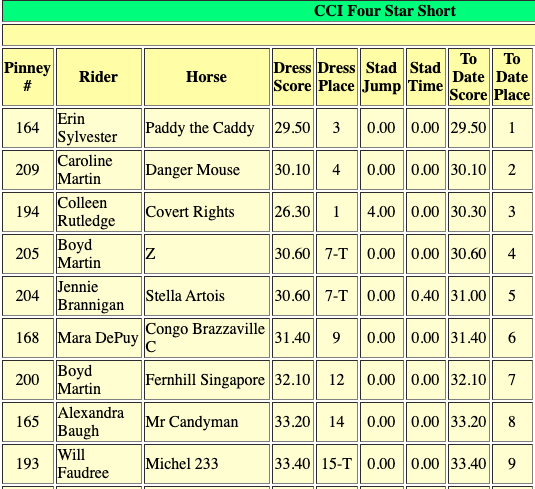