“How was your weekend?” is the prompt that usually begins Nation Media’s Monday morning team calls. Jumper Nation editor Lynn Mueller always surprises us with her spare-time feats (recent example: 100-mile run race on Saturday followed by a jump lesson on Sunday), always relayed with nonchalance and an enthusiasm to just get back to work already. For Lynn, as for many of us, sports can double as self-therapy. The trick is figuring out how and where to channel our energies.

Note: This piece contains words or imagery regarding eating disorders and suicidal tendencies that may be triggering. If you feel you may be triggered, do not read this piece. If you are reading and feel triggered, seek help and call 911. 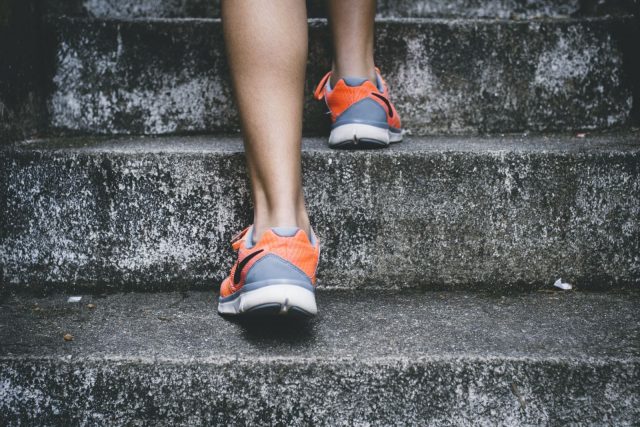 I used to think that being involved with horses, being an equestrian, was an “all-in” thing. In order to identify myself as someone who rides, has her own horse, competes occasionally, and correspondingly spends inordinate amounts of hard-earned cash, I thought this horse thing had to be “all or nothing.” Life all about the barn. A ride making all the troubles go away. Blitzing gracefully around the show ring.

When I do compete, though, we usually go clear. But we don’t often place.  No, it’s not all about the ribbons. I come away from a show satisfied that we even made it around a course sometimes, or if my horse and I learned something (or if she saved my butt). However, there’s quite a bit of luck (and money) involved in making it to higher levels of this sport.  I’m kind of throwing a random height out there, but let’s say, once you get to the high adult jumpers (about 1.10m), you’re talking typically nicer horses, tougher competition, and more time spent in training when you go to a show and get beat by a hundredth of a second.

Don’t get me wrong. I like riding. It’s hard to see myself without a horse in the picture. I do enjoy being at home more than a show, though, especially when I’m a single-income person working two jobs (one primary, one part-time) to fund this hobby.  And yes, I make six figures at my primary job, but when taxes, Medicare, 401(k), and everything else comes out, there’s enough to cover basic bills, some savings, the horse, and a little extra. Most days, I’m sucked dry of time and energy. And at that point when I go to the barn in the morning, I want it to be a place where I can ride my horse and just turn my brain off. Well, you can turn a decent amount of your brain off and relax for a trail ride, but for flatwork or a lesson, the answer for me personally is no.

I actually have a sport that does the brain thing, though, and one that I am far better at. It’s running. But having two sports doesn’t make me any “less” of an equestrian.

I started running back in high school and did cross country and track. I wasn’t that good, likely because there were plenty of other varsity girls to get intimidated by, and my nutrition was primarily based on Little Debbie Cosmic Brownies and Zebra Cakes, so it was really hard to be fast.  Cross country was your standard 5k race (3.1 miles), and in track, I did the 3200m (two-mile).  In 2006, our cross country team volunteered to pass out water at one of the aid stations for the Chicago Marathon. Refilling cups and passing them to runners, I marveled at the whole 26.2 mile thing (it seemed really far), and ran it the following year in a (looking back now) painfully slow time of 4:29 (4 hours, 29 minutes). I had an eating disorder at the time, so you can imagine why everything was slow. No food going in, no running going out.

I went to China to study abroad the following year and went through a phase where I got addicted to running. The danger about running is that you can get really, really obsessed with it – especially for those of us with Type A personalities. I tore the meniscus in one knee and would run on it seven miles every single day with no breaks, and sometimes I would go out twice a day. My roommates noticed that I was hobbling around, so I started sneaking out in the middle of the night to go run. I never got it operated on, either, because I was afraid that if I stopped running, I would gain weight back (and granted, I was barely 115 lbs. back then).  When I came home to the States and made a plea to graduate a year early, I took mostly graduate classes that were more time-consuming, so the running died down a little.  It did pick back up here and there, but nothing major until after a business trip in November 2019. I found quieting outlets in the horses and occasional shows.

I’m pretty open about the fact that I’ve got plenty of mental health fun going on upstairs. I have massive social anxiety, to the point where some would call it “antisocial.”  I haven’t traveled in over eight years – too many people in planes and airports. Also, “but wait, there’s more!” — there’s “traditional” anxiety, depression, general mood disorder, ADHD, PTSD, a history of self-harm (cutting), and three suicide attempts. Ending up in the middle of San Francisco during a gigantic conference (that I would have rather not attended) wherein 170,000 attendees stormed a two-mile square chunk of the city led to that third suicide attempt and a lovely stay in the psych ward.  Actually, the stay wasn’t that bad because the food was pretty good (Chinese food day!), you got nice, fluffy, warm blankets, and the doctors all intoned to get the hell back to Illinois.

After some more intensive therapy from one doc and some more drugs from another, I received instruction to channel some of the extra frantic energy. I started running again, but of course I wasn’t going to just RUN. Nooo, silly question. Needed to actually go push the self, win something, and go after it. Whatever “it” was. So, I signed up for a half marathon to start easily but actually did it right this time. I read articles about nutrition, subscribed to Runner’s World Magazine, actually bought proper shoes that encouraged a correct footfall and speedier gait, changed out my shoes every 300-400 miles, and followed a weekly schedule based on performance and experience.  I PR’d (set a personal record) the half marathon in April 2020 in 1:11 (one hour, 11 minutes) and was first in my age group (early 30s).  Next, it was time to set eyes on another regular marathon. I PR’d that one in May 2020, in 2:56 and then said, “OK, self, now we are bored of these, what’s next out there?”

I was discovering several things: a) Running was helping to quiet the brain, and b) Competing was fantastic as it satisfied that gnawing urge to get out there and go, but it’s infinitely less expensive than horse showing. It filled that void that riding and/or competing can’t solve for me, the void where you can push yourself until you reach your physical breaking point. Horse shows can’t fill that drive to succeed when I physically can’t afford to attend them all that often — and/or would rather allocate funds to savings. Imagine: OK yes, I replace my shoes every month and a half due to mileage (I run about 50 miles a week, depending on what’s coming up in the schedule) and my shoes are $114.95 a pop, BUT an ultra marathon is about $95-295 to enter all inclusive — whereas a show, even if there’s no hotel, is about $1,000 per week and that doesn’t include your hauling and day fees. The leftover funds? Stick ’em in your 401(k). Pay off debts.

There’s a fun run planned for later this December, and next year I’ll get some more practice with 100 milers before trying to go for the Grand Slam (you run 5 select ultramarathons and get a trophy. And I think another free shirt).

Meanwhile, while I collect all the free shirts from these races, I think of how both horses and running keep me sane. But it’s OK that I can’t do massive amounts of competing with the horses…and you know what?  It’s OK that for me, riding doesn’t satisfy that gnawing urge to power through, push yourself to the limit, and see how far you can go before you break. I do two sports. I’m better at the running rather than the horses. But I’m still an equestrian.

What’s your other sport?