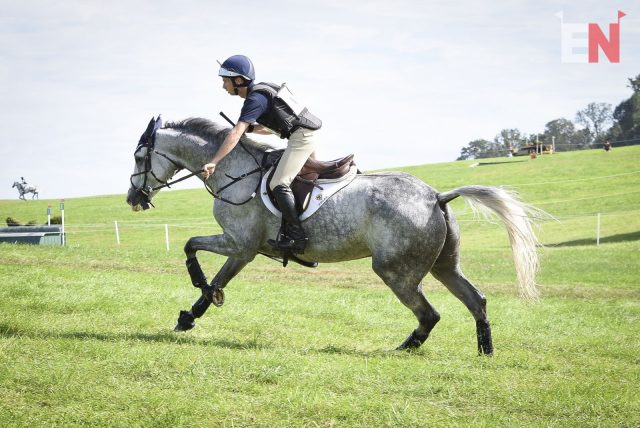 A soggy, gray day kept much of the atmosphere dampened for the CIC1* stadium rounds but the locally-based West Grove riders seemed unfazed, taking the top three placings in the CIC1*-A. After stadium, the top three placings remained unchanged, with Mike Pendleton leading the way on Steve Blauner and Boyd Martin’s 6-year old gray Carlsburg.

“Boyd and Steve Blauner got him as a 3-year-old at the Goresbridge sale. Boyd and I started him and he’s been going well ever since. Now he’s six, this is his sixth or seventh Prelim. We just breezed around today. He cruised around (the cross country). We’re lucky to have all the cross country schooling at home, so he didn’t blink at anything here.”

“I don’t really know what’s next. I think he might do a fall CCI and we’ll go from there. It’s really awesome that Boyd is letting me kind of take him through the levels the last two years that he’s been competing. He’s willing. He wants to please. He always wants to put in a good test. He’s a careful horse, and he always wants to show jump clean even if I make a mistake, so he’ll be an exciting horse.”

Ryan Wood maintained second position on Ruby, the 9-year old Oldenburg mare owned by Summit Sporthorses. This is the mare’s third time finishing second at the one-star level, but only second time to finish on her dressage score at the FEI level.

Boyd Martin rounds out the top three with the 9-year old Thoroughbred gelding Barry, owned by Windurra LLC, who finishes on his dressage score for the third time at the level.

In the CIC1*-B divisions, Caroline Martin topped the leaderboard with her own Cristano Z, a 9-year old Zangersheide gelding who has extensive experience at the two-star level but took a step back this weekend after having trouble stepping up to Advanced this year. Cristano Z won the CIC2* at Jersey Fresh earlier so now has back-to-back wins on his resume.

Lindsay Beer rounds out the top three on El Paso, a 16-year old Trakehner gelding owned by Penny Beer, who Lindsay has previously competed up through the 3* level. This pair is entered at the Advanced level at Stable View next weekend.