The World Equestrian Games may have only ended Monday but with dressage beginning Wednesday afternoon at Plantation Field, there was no rest for the riders who faced Florence down in Tryon. Boyd Martin in particular had a quick turn-around with one ride Wednesday afternoon and another five on Thursday, while Phillip Dutton, Lauren Kieffer and Lynn Symansky all had rides Thursday and Friday. 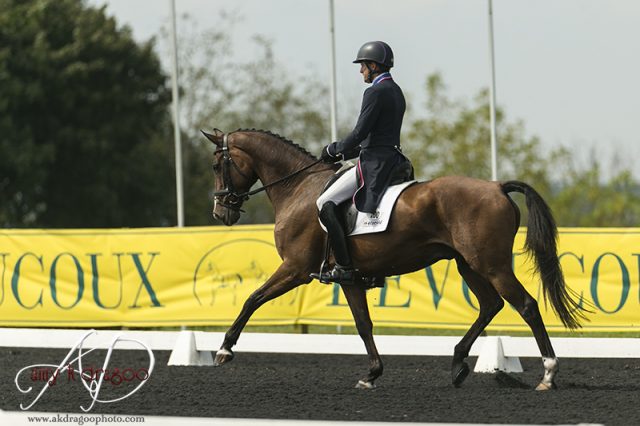 Boyd Martin picked up right where he left off with Long Island T, leading the 2*-A division from the word go. Despite being the first in the ring, often considered a tough spot from which to score well, Boyd and the Long Island T Syndicate’s 12-year old Oldenburg cross dropped the mic with a 25.7 to lead the division by almost two points over second place.

On the quick turnaround from WEG: “Long Island T did a brilliant test on Wednesday. I got home from WEG on Tuesday and gave him a quick school and then the next day I took him to Plantation, so it was a pretty awesome result considering it was the first time I’d ridden him in a few weeks.”

“I’ve got a really great group of people helping me — Mike Pendleton has been schooling the horse along with Silva, and to be honest he felt better than ever. It was a bit depressing for me. I may have to get them to ride him more often.

On dropping his 3* horses down to the 2* this weekend: “Last year I got knocked out of Plantation so I decided to put a lot of my horses down a level. I thought since I haven’t been jumping him that much that I’d err on the side of caution. They’ve been going pretty hard all year, so I’m hoping to give them a nice, easy fitness run this weekend. We know the footing will be spot on and this will be a stepping stone toward our major goal this year of the Fair Hill CCI3*, which is always a serious test of the horse.”

Kentucky-based Allie Knowles sits in second on Katherine O’Brien’s Business Class, an 8-year old Selle Français chestnut mare, after scoring a 27.6. Allie obtained the ride on the chestnut mare at the end of 2016 after the horse finished seventh in the Le Lion d’Angers CCI1* with Sophie Richards of Ireland. 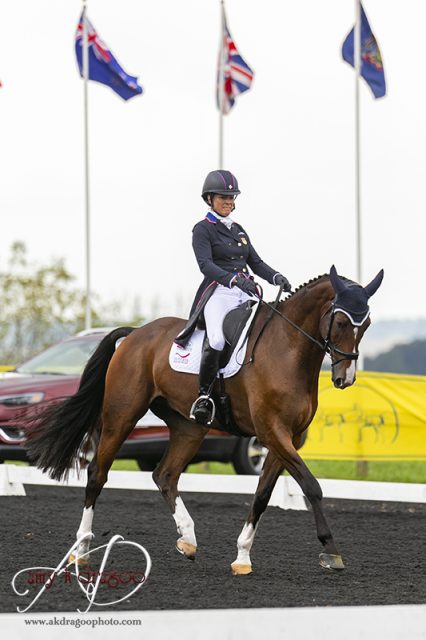 Lynn Symansky just put in a personal best at WEG with Donner and the success is leaking over to her other rides as she leads the 2*-B with The Donner Syndicate’s RF Cool Play. The 10-year old German Sport Horse gelding scored a 23.0 to lead the division by more than two points over The Apprentice and Contessa.

On keeping RF Cool Play going while at WEG: “The highlight was that he was good because I haven’t been riding him very much recently. He’s had a multitude of riders over the last few weeks. I’ve had some girls filling in at my barn for me, and my friend Hannah Sue Burnett has jumped him a few times for me while I was gone.”

On his fall plans: “I bumped him down to the two-star because this is his first competition back since the CCI3* at Jersey this spring. I just didn’t want to take him in the three-star here after I’d been gone a bit pre-WEG. He’s here just for an easy run, and then he will go to Morven and the CCI at Jockey Club. I’m targeting him at something a little later (in the season) just because I wasn’t around to do a lot of his fitness work. I feel like he’s matured a lot in this last year. I did a lot this spring with him, he had just stepped up to the level. He’s had a little bit of time off and he feels a lot more mature coming out this fall. I think he’s a cool horse for the future.”

On his strengths: “He does have show nerves, so he may be a little fun to ride in the arena tomorrow. He’s a super cross country horse, but he may be a little tricky to show jump. But we’re not here for the big win really, we’re here just to have a little school.

On the quick turn-around from WEG: “I spent one night at home, and then I came here on Wednesday. I left the barn at 9 p.m. because I had finally finished my laundry and unpacking from Donner and then repacking. Then I got here at 12:30 in the morning, and my barn was the one all the bottom of the hill, so I got stuck and I just slept in my trailer. I couldn’t get out because I needed to be towed. We went from going to the World Championships to sleeping in my tack room on Wednesday night. Living the dream.

“The turnaround has been fine though. It is exhausting, not just physically but emotionally. And everyone back at the barn has been working super hard to make everything keep going. “

Boyd Martin is a busy man, and not only is he leading the 2*-A division with Long Island T but he also sits tied for second in the 2*-B division with the 9-year old Holsteiner mare Contessa. After winning Bromont CCI2* in June, the Club Contessa-owned mare put in a solid 25.2 to tie with The Apprentice and Caroline Martin. Caroline is competing at the international level again for the first time since her fall at Millbrook; she also has rides on Jump Jet in the 2*, Danger Mouse in the 3*, and Cristano Z in the 1*.

After yesterday’s dressage, Texas-based eventer Rebecca Brown leads the CIC1*-A division with her own 9-year old Dutch Warmblood Dassett Choice on a score of 27.0. Although the pair has 2* experience together, they’ve dropped back to the 1* level this spring, winning the Texas Rose CCI1* in June from start to finish.