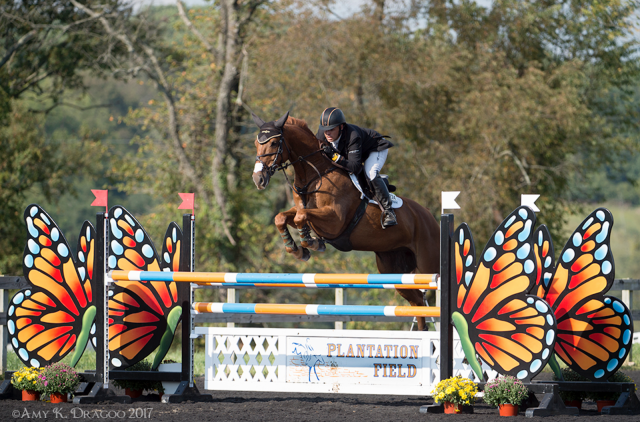 After an ambulance trip to nearby Christiana Hospital, we are relieved to report that Boyd sustained no major injuries aside from “a good knock on the right leg and his head.” But he withdrew all of his horses from the competition as a precaution.

With Boyd and Long Island T withdrawn, Selena O’Hanlon and John and Judy Rumble’s Foxwood High moved into de facto pole position. After Foxwood High jumped a beautiful round aside from one unlucky rail, the door opened for Buck Davidson to capitalize with Copper Beach and Carlevo.

Buck had already jumped two show jumping rounds in the CIC3* with Park Trader and Jak My Style, racking up five rails between them. So he did the only logical thing that could change his luck: switched out his coat, gloves and helmet.

A clear round inside the time with Copper Beach would have instantly secured first place for the horse overnight, but Buck kept things interesting by picking up 1 time penalty on Chris Barnard’s technical show jumping course. Then we looked to Carlevo LLC’s Carlevo, the final horse to go, to jump a fault-free round and secure the lead, but 4 time penalties ultimately slipped him to eighth on 46.8.

So after a nail-biting show jumping that saw just 26% of the field jump clear and inside the time, Buck Davidson and Copper Beach, an 11-year-old Irish Sport Horse gelding owned by Carl and Cassie Segal and Sherrie Martin, sit first on 43.3.

“Thank you to my sponsors (Charles Owen, SSG Gloves, Charles Ancona) for sending me enough supply for my weird habits!” Buck laughed after show jumping. Whether switching out his gear made the difference or not, Buck said he was thrilled with those two clear rounds.

“Copper Beach is just an out and out trier,” Buck said. “He’s the most competitive horse short of (Ballynoe Castle RM). He just tries, and he might knock down all the jumps in the warm-up, and he might not be very good in the dressage warm-up, but he just goes in and tries his heart out. He tries all the time to get the job done.”

Copper Beach, better known as “Sean,” has five international wins on his record already, including a win at Chattahoochee Hills CIC3* this spring, and Buck would love to add a win at his hometown event, which is hosted just across the road from his family’s Chesterland Farm.

The horse is gearing up for Les Etoiles de Pau CCI4* in France next month, and Buck intends to go out of the startbox chasing the optimum time of 6 minutes, 18 seconds on Mike Etherington-Smith’s cross country course tomorrow.

“The ground is perfect, and I’ve been really working on Sean and Carlevo’s fitness. The course asks everything. I think it’s nicely presented, and I would like to think that I would try to push myself and push them in the hopes that we can get a good result. I’m certainly going to set off thinking I’m going to go for it.” 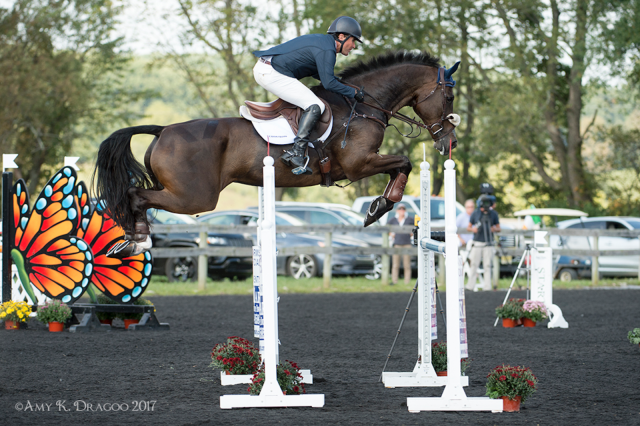 Phillip Dutton will be waiting in the wings with HND Group’s Mighty Nice, who is competing for the first time since winning an individual bronze medal at the Rio Olympics. “Happy” jumped one of the 11 clear rounds inside the time to move up from fifth to second place on 44.3.

“Happy jumped beautifully today,” Phillip said. “I wasn’t quite sure where we were going to be with his show jumping since he hadn’t been to a competition since Rio, but he picked up right where he ended last year.”

Unlike Buck, going for the time is not part of Phillip’s plan for Happy, as the horse is still building up his fitness after a long, well-deserved break following Rio. Instead, Phillip said he will be looking to give the horse a steady run tomorrow in preparation for the Dutta Corp Fair Hill International CCI3* next month.

With Phillip opting for a more conservative game plan tomorrow, we are looking to 2010 Plantation Field CIC3* winners Jennie Brannigan and Cambalda, owned by Tim and Nina Gardner, to challenge Buck for the win. A fault-free show jumping round moved them from seventh up to third on 45.6. 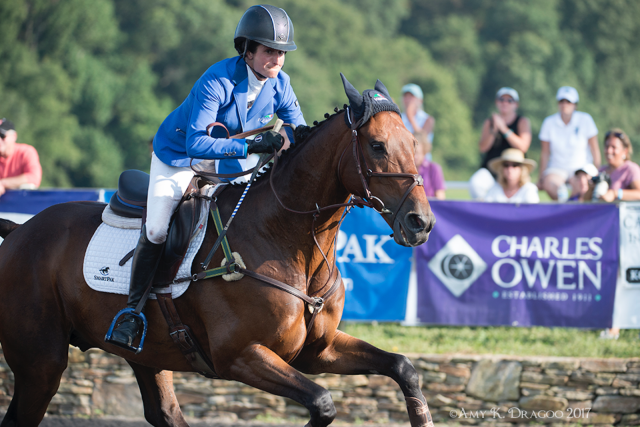 Jennie’s game face is ON for tomorrow! Photo by Amy Dragoo Photography.

It is nearly impossible to bet against this combination at the CIC3* level. Jennie and “Ping” have won five CIC3* competitions in their storied career together and finished in the top five in 89% of their runs at CIC3* level. Shout out to EquiRatings for that eye-popping statistic!

“He’s obviously a horse I know really well, and he’s been quite a good show jumper,” Jennie said. “It’s nice to come to an event and have it not be a dressage show and know you’ll need to ride accurate and keep the time at the forefront.”

Looking ahead to tomorrow, Jennie is honest about the fact that missing out on the win with Ping in the Adequan Gold Cup Final at the American Eventing Championships definitely lit a fire under her. Granted, she was nursing a broken hand sustained in a freak accident in show jumping warm-up at the show, but after undergoing surgery she is ready to go for broke tomorrow.

“(My hand) is something that I do have in the back of my mind, but I don’t think I’m affected by it in my riding,” Jennie said. “At the AECs I was in a lot of pain, but it’s secure now after having surgery to put five pins in it. It’s still sore, but I’ve got a special splint that helps. I’m ready to go for it tomorrow.”

Looking to the remainder of the shuffled leaderboard after show jumping, Selena O’Hanlon and Foxwood High now sit fourth on 45.8 with one rail down. Mara DePuy and her own Congo Brazzaville C continued their clear show jumping streak since moving up to the Advanced level, scooting from eighth to fifth on 45.9.

Phillip Dutton also jumped clear and inside the time with the Z Partnership’s Z to move to sixth on 46.2. Will Coleman and Kathleen McDermott’s Boris O’Hara moved to seventh on 46.4 with their fault-free round.

Kurt Martin joined Phillip as the only rider in the field to jump clear and inside the time on two horses in the CIC3* field, and both riders have two horses inside the top 15 after show jumping. Kurt sits ninth with the GSC Syndicate’s Anna Bella on 47.5, and 13th with Bill and CJ Martin’s Delux Z on 50.3.

Sharon White and her own Cooley On Show moved from 21st up to 10th on 48.6 thanks to their clear round inside the time, which demonstrates just how influential Chris Barnard’s show jumping course proved to be here at Plantation Field.

As we look ahead to tomorrow, less than 6% of CIC3* starters have made the optimum time on Mike Etherington-Smith’s cross country course since he took over as the designer in 2015, so we are expecting a nail-biting finale. You can watch live starting at 12:55 p.m. EST on USEF Network. The top 20 will jump in reverse order. 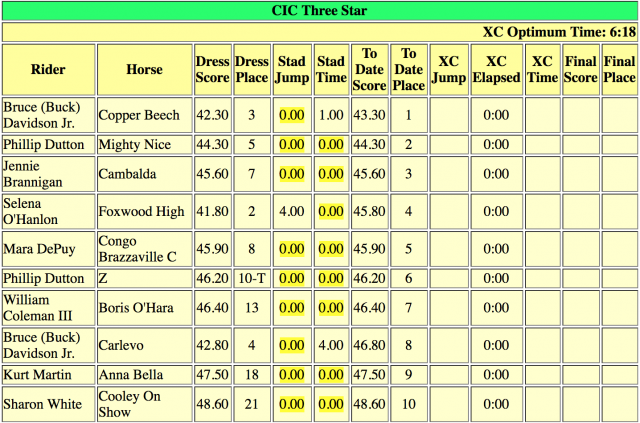