We’re going to spend some time later on talking about the triumphs of the American eventing team in 1932, but today it’s monumentally important that we pause and tip our hats to the team that put together the first ever Olympic equestrian facilities in the United States, and in the heart of Los Angeles, no less. Boy did they have their work cut out for them.

Unlike the Olympic venues that we see today where the equestrian events practically happen in another country (I’m looking at you, Beijing/Hong Kong), the IOC was absolutely insistent that all the events happen practically within walking distance of each other, including eventing. In Los Angeles. I KNOW.

There are so many things about this that are crazy. Which you like me to list them all? Because I’m going to do that now.

But the best part about how all of this is crazy is that they did it anyway, and it was utterly triumphant.

From the Official Report on the Los Angeles Summer Olympic Games:

“Thanks to the earnest co-operation of United States cavalry officers representing the International Equestrian Federation, who spent more than two years in investigating possible sites and in preparing the course decided upon, a course complying in all details with the requirements of the Equestrian Federation was finally constructed for the Cross Country events. It was a course which presented unusual difficulties to horses and riders accustomed to standard racing conditions, but on the other hand was absolutely typical to western United States and one whose difficulties presented a sterling challenge to the worlds visiting riders and mounts.

What the equestrian officials in Los Angeles did is nothing short of magnificent. Not just in the beautiful course that did in fact define American Eventing in the era, but also WHERE they built it. The “A”, “B”, “D” and “E” elements appear to mostly have happened in the rural hills at either end of the long endurance phase. But the “C” portion cut right through the middle of the Olympic village universe, and it’s a travesty that there are not photos to prove it. 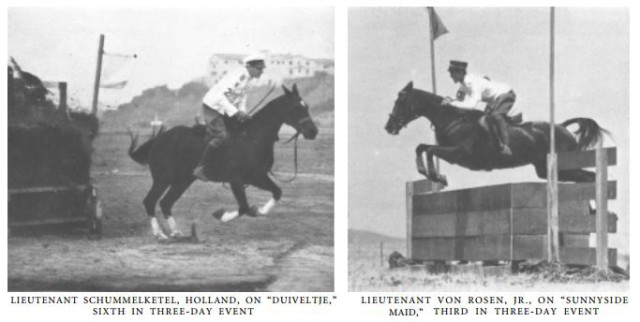 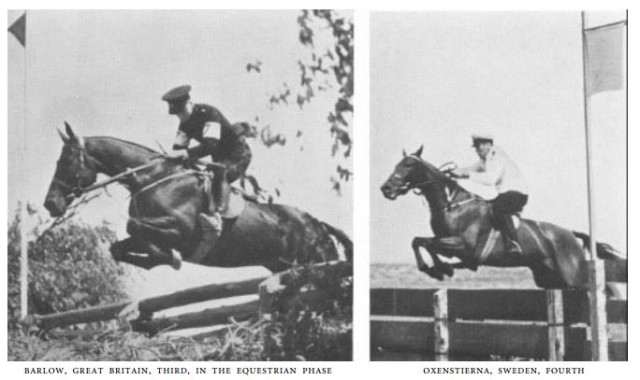 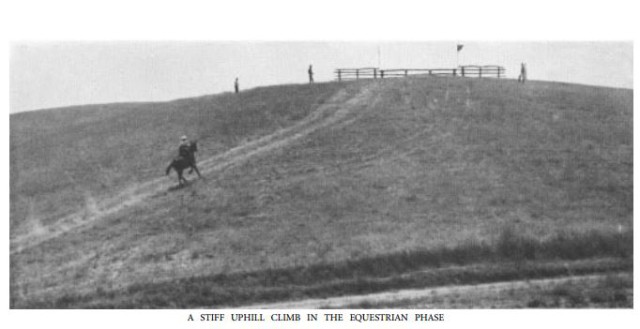 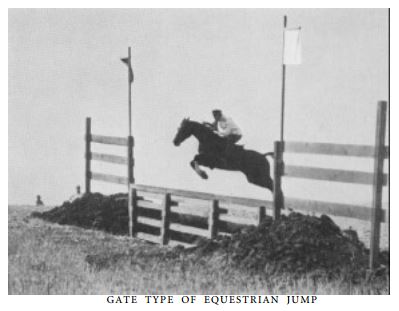 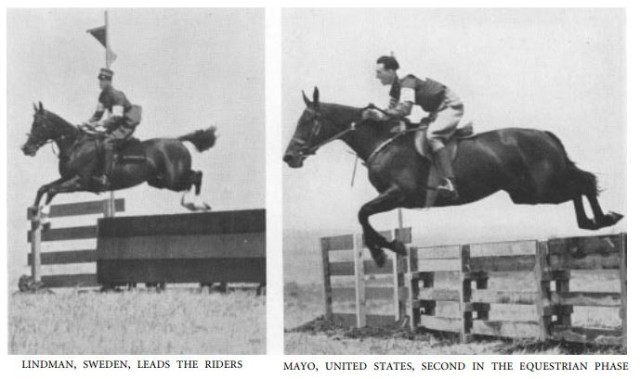 What we do have as proof are the maps, and as best I can tell from studying the rudimentary sketches, here are the layouts for the course map, and their rough modern equivalent on Google Maps. (except for the twisty parts on either end, which we not sufficiently marked to rebuild the route.) 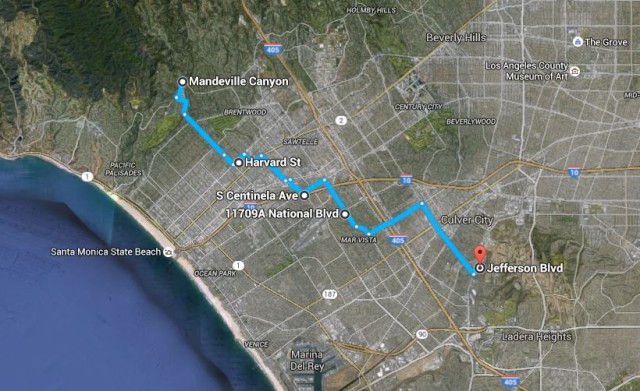 Approx 9.5 miles one way from point to point. Screenshot via Google Maps.

The course crossed multiple major thoroughfares and cut off downtown Santa Monica from any traffic northwest of Centinela Avenue. It’s absolutely mind-boggling. As best as we can tell, the route crossed several major thoroughfares, but was mostly held on what organizers described as a more “rural path” running North to South that allowed for some soft footing, and didn’t completely up-end traffic.

From the IOC Report:

The course for the Cross Country phase of the Equestrian championship unavoidably bisected all of the numerous busy thoroughfares and highways between the city of Los Angeles and the Santa Monica bay district, and this event was scheduled to be held during the peak of the morning traffic. The route of the course followed the rural districts, through which sections motor cars travel at high speeds.

It was not only necessary to protect the horses and riders from actual injury, but also to stop the traffic at sufficient distance from the course so that the high-bred animals would not be frightened or disturbed by automobiles or other vehicles. Through the co-operation of the local police departments of the districts through which the course was laid out, and with the additional assistance of Los Angeles and State police, traffic was either detoured around the course or rigidly controlled. Cars were not allowed to cross the course at any point during the period of the event unless it was absolutely safe for them to do so. Chain controls were installed at the finish to prevent crowding by the public.

The Dressage portion was held in a temporary stadium built at the Riviera Country Club, and sat around 6500 spectators. 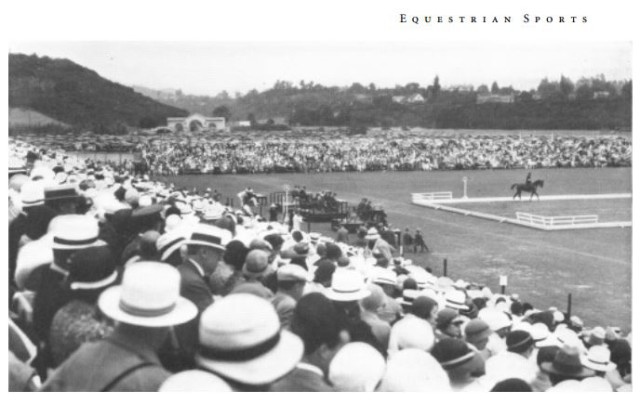 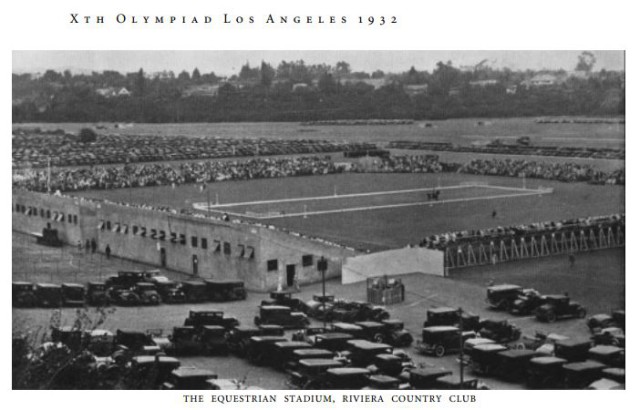 The show jumping phase (for both eventing and pure show jumping) was held in the primary stadium of of the Olympic Games, amidst the running track implements and other hazards, but in nearly as picturesque a setting as an Olympic competitor could ever hope. 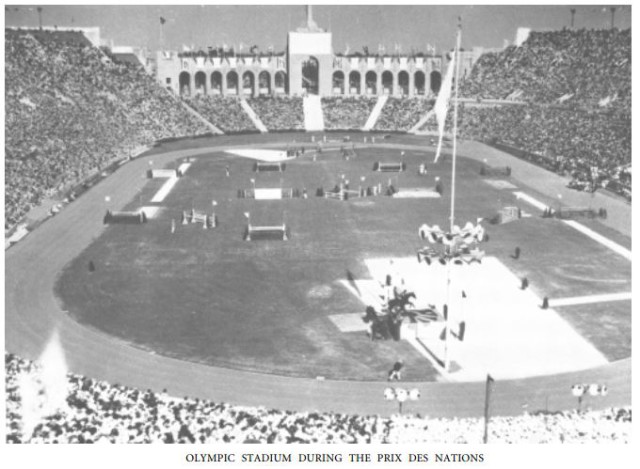 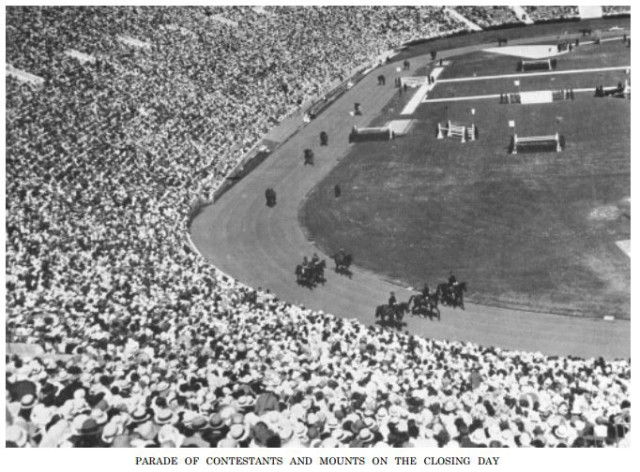 Hilariously, the IOC also notes that part of the “D” element of the cross country course was used for the modern pentathlon competitors, who are famously not pentathletes by way of their horsemanship. According to the IOC, “It presented no unusual difficulties to experienced horsemen, although rather terrifying for those who entered the Pentathlon event without proper experience in cross country riding.”

There are some wonderful characters in the athletes who competed in the Los Angeles Games, and in the coming weeks we’ll get to share their stories with you. But the volunteers who made such a spectacle possible deserve this moment of reverence again for what they brought to life in absolutely crazy circumstances. As the IOC Report perfectly states in its honorarium of the Games’ volunteers, “This, then, shall be our tribute: The disclosure of an unselfish spirit of devotion to an unselfish ideal.”

May we be in pursuit of such a worthy cause. Go Eventing.

All photos courtesy of the IOC’s Official Olympic Report on the 1932 Los Angeles Summer Games (public domain). You can see these reports for yourself in parts One, Two, Three, and Four.