He was named one of the 50 most influential horsemen of the 20th Century by the Chronicle in 2000.  He is also the only rider to have won both a gold medal in Eventing and a Tevis Cup buckle in Endurance.  Denny Emerson was inducted into the USEA Hall of Fame in 2006 carrying honors including team gold for the US at the World Championships in ’74, Rider of the Year in ’72, and acting as President of the USEA for a total of five years.  He has also received the USEA Wofford Cup for lifetime service to Eventing.  Denny runs Tamarack Hill Farm with his wife, May, in Strafford, VT and Southern Pines, NC.  (Above: Denny and Core Buff [out of Royal Core] in Blue Ridge, VA in the late 70’s.)

1. What are 3 essential skills you stress to students?
One of them goes back to something Jack LeGoff preached all the time.  To jump a fence correctly you have to have a canter that combines speed, balance, and impulsion.  The problem is balance and impulsion are not compatible qualities.  It is easy to get impulsion without balance and vise versa.  The trick is to keep a canter with both that is active enough to go forward and back as needed.  One thing said about Margie Goldstein-Engle is her body is a tuning fork for the right canter.  Within two strides after a fence she recognized the canter she had and knew immediately if and how she needed to adjust it.  So one skill is to make your body a tuning fork for the right canter and to learn to combine balance and impulsion.  How do you take a horse running long, flat, and on the forehand and get him to bring his hocks under him and his body up?  So another skill is to have the ability in the last few strides before a fence to take a canter that is forward and down and turn it into something that is over and up.  That’s a real skill.  If you watch Bruce who rides with a bit of a half-seat and Phillip is standing straight up-every rider achieves this goal differently, but this skill is very important because it is related to safety.  Not being able to make this adjustment is what leads to horses catching a knee and these darn rotational falls.  So many Eventers aren’t foxhunting, steeplechase riding, and learning to “ride by the seat of their pants.”  They don’t gallop, set up, and jump up, they just gallop and keep galloping.  Jack LeGoff said the key is three things: 1: a good seat; 2: a good seat; 3: a good seat.  In other words, having an independent seat.
2. Why are gymnastics jumping exercises so important?
Because you put the horse in jeopardy where his job is to get himself out of trouble.  You have to say “Here, Horse. Sink or swim.”  The distances are already set right so you don’t have to worry about that.  The best exercise is this: Jump a cross-rail, 18 feet to a Swedish oxer with a false ground line in the middle, then 18 feet to another X.  The Swedish oxer will be slightly confusing and will encourage him to really jump up and round; you want his withers to hit you in the sternum.  All you have to do is look up, smile, and close your legs.  Gymnastics give the horse a chance to learn how to save his own ass.  You’ll get it wrong sometimes.  It doesn’t matter if you’re Mark Todd. Even the best will get it wrong, and that is when your horse has to have survival instincts.
3. In a sentence (or several), what makes a four-star horse?
Especially with the short format you’ve got to have…well…what you can’t have is weak links.  In the long format, a horse who is a little flat in showjumping or dicey in dressage but is a mega machine on cross-country could get away with having a slightly weak link.  Not today.  A four-star horse must be bold.  He has to be fancy enough to get good scores but quiet enough to ride correctly.  He must be brave, agile, fast and scopey and still sound enough on Sunday to pass the jog and leave all the rails up.  What a four-star horse really needs is a four-star rider.

4. Do you support bringing back the long format?

It isn’t going to happen.  The world has changed.  There is no land, no foxhunting, no steeplechase rides.  It is also a different group of people.  This is my 57th year competing. I’ve been Eventing since ’62 when judges were military guys so the sport was still close to its military roots.  Technically it was a great test, but it’s not going to happen.  The Training and Preliminary three-days are great opportunities to ride horses that want to jump all day.  He’s on fire on XC if he’s the right horse.  Do you know how nervous you get before showjumping?  Imagine doing a second showjumping round almost immediately.  You’ll be a lot less nervous and it’s easier;  that’s what it’s like on XC after doing steeplechase.
5. How does a conditioning program change from the short format to the long format?
They had to be such a bloody rock to do 18 miles.  When I was at Burghley in ’74 the endurance test was 17.7 miles.  You had to have a horse that could go all day and had to be at almost Tevis Cup fitness.  The heart, feet, and lungs had to be fit.  Like Iron Man.  I think the short format is harder because it is easier to run at a steady pace for a long time than run like a scared rabbit, set up, showjump a fence, run, SJ, etc.  That’s really hard on a horse.  I don’t think people have quite figured out how to get ready for the short format. 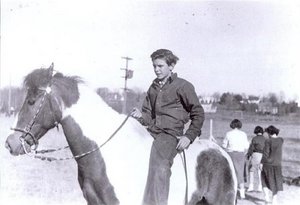 6. How did you become an Eventer?
I watched the Wofford Cup in 1961.  I was riding Morgans and doing 100-mile endurance races at the time.  I had never jumped.  I was 20.  I wanted to do it because I did not know how. (Left: Denny and Paint at his first competition, 1954 — times are different and these days cool kids wear helmets all the time when riding)
7. Has your experience in Eventing affected your approach to Endurance in any way?  Or vise versa?
I was 15 years old when I did my first 100-mile race.  Everybody used to do Endurance.  You learned how to get horses fit the long and slow way.  There are two kinds of fitness.  The heart and lungs get fit the fastest before the muscles and tendons which get fit before the hooves and bones, which are the slowest to get fit.  To get rock hard fit, you had to do tons of long slow miles on pavement and up hills.  The fitness of an Endurance rider is to gut it out, not have the iron quick reflexes of an Advanced Event rider.
8. Who are three up and coming riders to watch out for?
Like Jimmy says, you always go to the “usual suspects”…the two Wills [Faudree and Coleman].  Michael Pollard, I think he’s a sleeper who just doesn’t have the stock right now.  Rebecca Howard is a good girl.  She has guts.  There are 10 or 15 of them out there who just need to catch a break with the right horses.
9. Do you have a favorite horse from your career?
I think the best horse I’ve had is York, who I bought from New Zealand in the mid-70’s.  The American Eventing community didn’t know how susceptible to worms the horses from New Zealand and Australia are.  So I lost two years with him to worms.  Then he came back and won Chesterland and was USEA Horse of the Year.  York would be a horse in 2010 who could still be a big time horse.  Victor Dakin was a cross-country machine, but he wouldn’t be good today because he was bad in dressage. (Right: Denny and York at Groton House, 1979.  York was bought sight-unseen from NZ through Lockie Richards)
10. What are your interests besides horses?
I write some, I read, garden, build stone walls…but I’m pretty interested in horses.  I like breeding and jumpers.  I have a theory that in the next 10 years if Eventing doesn’t keep changing….When I started 48 years ago, the speeds were identical but the courses were more flowing.  I think they could try slowing down the speeds by 20 mpm or so.  See if it allows the riders more time to gallop and set up where they don’t have to run like scared rabbits in between fences.  There is going to be a Congressional hearing if we don’t stop losing riders and horses.  Someone will come down on us like a ton of bricks.  Last year, Phillip had two rotational falls and lost one horse.  Zara had a rotational fall, broke her collarbone and lost her horse.  That is not a fixed sport.  Somehow we have to figure out how to make it safe without gutting it.  You are going to be the ones to figure it out; I don’t know how to do it.  We should start trying new things.  [Here Denny quoted from the poem “Charge of the Light Brigade” by Alfred, Lord Tennyson]  “Theirs not to make reply / Theirs not to reason why / Theirs but to do & die / Into the Valley of Death.”  That’s what our riders are like.  They don’t analyze, they just do it.  The upper-level riders need to be more advocates for fixing the sport.  They don’t make waves but they have the most invested.  I don’t know if it’s the shift to the short format or if it’s because the sport is more suburbanized.  No seat-of-the-pants stuff.    Kids learned to be clever and ride in the backseat by going out and being defensive, aggressive riders.  Kids need to get savvy.  Imagine Buck’s experience compared to 99% of the riders.  He rode ponies, foxhunted, steeplechased, all because he was Bruce’s son.  It’s not their fault, it’s just a different world.
Thanks Denny for educating Eventing Nation, and thanks for reading!
0 0 votes
Article Rating
Subscribe
Login
Please login to comment
0 Comments
Inline Feedbacks
View all comments
More Insanity on Horse Nation >>