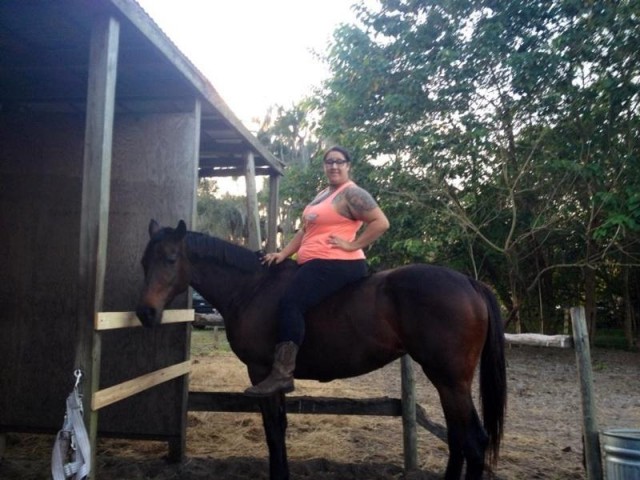 In the age of being twitterpated over celebrity followers, ‘checking in’ at every new location you visit to the point that any would-be stalkers don’t even have to get off their couches to keep close tabs on you, and gramming anything in an insta, I think it is safe to say that social media is here to stay.  Consequently, the equine marketing industry has been revolutionized with the advent of plentiful, free-of-charge opportunities to hock anything from sleazies to Stud Muffins (say those two things in the same sentence in non-horsey company and see how many weird looks you get) and of course, to sell horses.  In a never-ending quest for yet another OTTB to fill one of my stalls and be my next Rolex horse, I spend hours of every week combing all of the traditional rehoming agency websites and, increasingly so during the last couple of years, pouring over every social media outlet known to (wo)man.  Surprisingly, doing the latter has actually produced some of the most “eligible mounts” (Don’t get excited, ladies.  I’m talking about four-leggers.  For two-leggers, might I suggest Tinder?).  From just a single picture or sentence that a friend ‘liked’ or ‘tweeted’ or ‘grammed’, I have happened upon a  half-dozen or more horses that I have actually ended up buying for myself or connecting clients with.  Bearing all of this in mind, I bring you the much anticipated guide to ’10 Sneaky Social Media Second Meanings’.

Verification of Legitimacy: I kid you not; these are actual terms, idioms, and superlatives that sellers have thrown at me.  In the last month.

A teenaged friend of one of my equally teenaged students rang me last week to request that I accompany her on a test ride of a green horse available for cheap, quick sale (several red flags in that sentence, folks).  We arrive, the owner catches horses (given about ten minutes and two buckets of grain), and we cross tie the beast ready to slap some tack on it.  The teenager, armed for battle with a fleecy pad on one arm and her three hundred year-old saddle on the other, approaches the sale horse’s flank to give him a sniff of the equipment.  In four seconds flat, he kicks at her, she scoots away into his waiting jaws, she shrieks and shakes loose of him, and he promptly strikes her squarely on the hip with a dinner plate of a hoof while spewing alfalfa slobber all over her in an attempt to sink his fangs back into her tender young flesh.  Next.

9.   Destined for Eventing Superstardom = Zero Aptitude for Any One Discipline

After six months under saddle off of the track, an OTTB popped up on CraigsList locally, advertised at an asking price of $5000.  Considering he was reputed to be ready to go Novice, I felt this to be an affordable amount and popped on over to a family farm to have a quick look-see. They lunged him at liberty first. He barely got out of a slow jog that featured hocks and fetlocks flailing all over the place.  Once the family dogs started chasing him, he picked up a brisk saunter that was sometimes composed of three beats and the owners set up a simple cross rail featuring generous ground lines, bright poles, and a middle height of about 2’…which he promptly plowed through five or six times before heaving his mass cleanly over it once each direction.  The owner’s daughter then hopped up on him and rode him out into the field/arena/pond/trash pile/manure pit/volleyball court/cross country area.  Some logs, barrels, and a few black midget round bales composed their rudimentary cross country course and PanchoTheWonderEventer proceeded to go over, around, through, beside, parallel, and perpendicular to each and every fence but never once did he go over one.  I really should start carrying a video camera with me.

8.  Flashy and Elegant = Starving and Devoid of A Single White Hair

The fancy (insert hoity toity discipline here) farm “over yonder” (Kentucky speak for still in the same area code but beyond sight) somehow acquired an OTTB.  With the application of a (insert gadgetry used to secure a horse’s head between its knees) , the implementation of an hour of (insert monotonous, trench-creating task here) each day before riding, and the absence of any grain in the poor geldings bucket, what stood before me earlier this week, advertised as “ready to go to WEF” was, in actuality, a coming 4 year-old Thoroughbred with a pedigree to die for, movement to wow most any Dressage judge, and not an ounce of muscle or fat on his gaunt frame that featured brown hairs on top of more brown hairs on top of a few bot fly eggs left over from the late fall warm up.  Fortunately, the hoity toits were so desperate to divest themselves of this “abomination” that they literally couldn’t load him onto my trailer fast enough, even offering to pay for the gas to get him back to my house.

7.  Great Endurance, Trail, or Foxhunting Prospect = This Is Actually a Mountain Goat

Some well-meaning owners, bless their hearts (when those three words are uttered together here in Kentucky, the speaker is immediately granted license to say the most absolutely terrible things possible about the intended target) called in a request to send a mare for evaluation this summer with some interesting results.  God only knows how they acquired her in the first place and the Devil only knows how they got her on the trailer and to my farm.  They just dropped her off during their lunch hour one day and said that they hoped the force was with me.  The mare was essentially feral (insert MacGuyver-worthy craftiness here).  Fast forward 30 minutes, some non-PETA approved shenanigan, and Voila! Mare on box trailer, doors closed, lead rope on.  There was a great deal of huffing and an even greater deal of puffing but she did not succeed in blowing my trailer down and after a few minutes of calm, I instructed my working student to drop the back ramp.  Gingerly, LittleMissBuckIt backed down the ramp like a pro and stood four-on-the-floor for about one hundredth of a millisecond looking as though all was well in her tiny world.  Fast forward 20 minutes. The mare had made her way THROUGH, on top of, and beneath SIX four-board fences, THREE six-pipe gates, a mountain of manure, a pile of tires, and a swamp.  Once ensnared in the quick sand of the swamp, she was recaptured, tranquilzed, loaded back on a van, and sent on her merry way to what I hope turned out to be a goat trainer.

6.  Built Like A Warmblood = We Will Need a Crane To Get Her On Your Trailer

Cautiously, I peered over the stall guard, squinting and poking my neck out like a turtle in distress in an effort to discern if anything with hooves resided within the dark recesses of the musty old racetrack stall.  Fumbling for anything that might provide a bit more light, I came up with my fancy dancy flashlight app, flipped the switch on the doomaflotchy, and beheld what most surely had to be a hippopotamus carrying quadruplets past term.  The “might as well be a Dutch Warmblood” from the newspaper ad might have measured 15.2 if her feet hadn’t been trimmed in eight weeks.  Of those hands, about five of them were accounted for by legs.  It seemed that the other ten hands were made up of belly, barrel, booty, and bay for days without an attractive marking to be found.  I don’t know about you, but I prefer my B’s to, well, be more along the lines of bone, brains, and broke.

5.  No Reasonable Offer Refused = We Won’t Take a Penny Less Than His Asking Price

BuiltUphill McStudlyPants was advertised at the local racetrack for $4,999.  This is the highest asking price that the rehoming organization will list and, bygolly geewhiz, his owner/trainer was apparently all but giving him away at that steal of a deal.  In a dark, damp shedrow, the smell of moldy hay filled our nostrils and the eerie green sunlight filtered through circa-1970 plastic window covers as we watched a moose in horse’s clothing galumph up and down the harder-than-concrete-in-winter jogging path.  Not a single hoof matched any other, his mane was somewhere between 3” and 3’ long depending on which side of his neck you were looking at, and he leapt about like a circus acrobat despite a lip chain held by a groom that looked as though he could whip Manny Pacquiao one-handed.  When we asked if his price was VERY negotiable, the owner/trainer wiped his brow with one grubby ham of a fist and said, completely straight faced, “I’d take $4,900 for him”.

Many of the ads that can be found on OTTB sites across the country have gotten rather creative with the ways in which they attempt to convey that a horse is not suitable for a beginner (Captain Obvious, we’re going to need your services here).  Upon throwing a leg over a lovely looking sale horse at a local buy-low-sell-high kind of joint last week, it was soon readily apparent to me just how creative these sellers are getting to be when trying to make a quick buck.  I assumed, wrongfully so, that being advertised as needing an “understanding” rider simply meant that the horse was not very well-schooled and needed a rider to understand such a plight and ride in a generous manner.  Au contraire!  This particularly creature gave not three flying bucks what was being asked of him.  Leg on?  Stand like a statue.  Cluck?  Rein back.  Tap With Whip?  Swish tail.  Once he finally began to move in a direction that resembled forward (after MUCH coercion), things didn’t really improve.  Inside rein?  Cue giraffe impression.  Outside rein?  Go go Ostrich gadget.  Steady, even contact? Tazmanian Devil level unlocked.  No contact at all?  Rolly polly fall on face maneuver executed.

A reliable resource that has produced at least two solid upper level horse leads for me in the past sent me a text last week including the following words:

Well I’ll be goshdarned.  I will make sure to add ‘swaybacked’ to my list of things that make or break a horse’s agility, stat! (and chiropractor bills, I’m sure!)

New clients phoned me, requesting that I assist them in selling a CTBM (Chestnut Thoroughbred Mare, see also: Anti-Christ). I went out to evaluate her at their farm, she was an absolute gem, and they then proceeded to fall off the face of the earth for several weeks instead of sending her to me for training as they had promised to do.  Fast forward one month.  They ring me to say that they will be sending her immediately because they simply “cannot find the time” to ride her and that she is just so “light of hoof” that she’ll be a great jumper.  A gem no more, she proceeds to spend the next two weeks trying to do backflips before returning to normal Anti-Christ existence.  Beware the light of hoof!!

Out at the track a few mornings ago, I was chatting with my favorite outrider, Stacey, when a freight train of a horse came zooming by, its rider squalling a few syllables that may have vaguely resembled Stacey’s name.  He galloped off to assist her in slowing the horse before it broke the sound barrier and I chuckled heartily.  Later in the week, I stopped by a favorite barn to see the newest reject ready for rehoming.  Billed as the most “free-moving” horse in the barn, the trainer led me to the track to show off this special steed’s fancy footwork and I instantly recognized Geronimo the Speeding Bullet from a couple of mornings before.