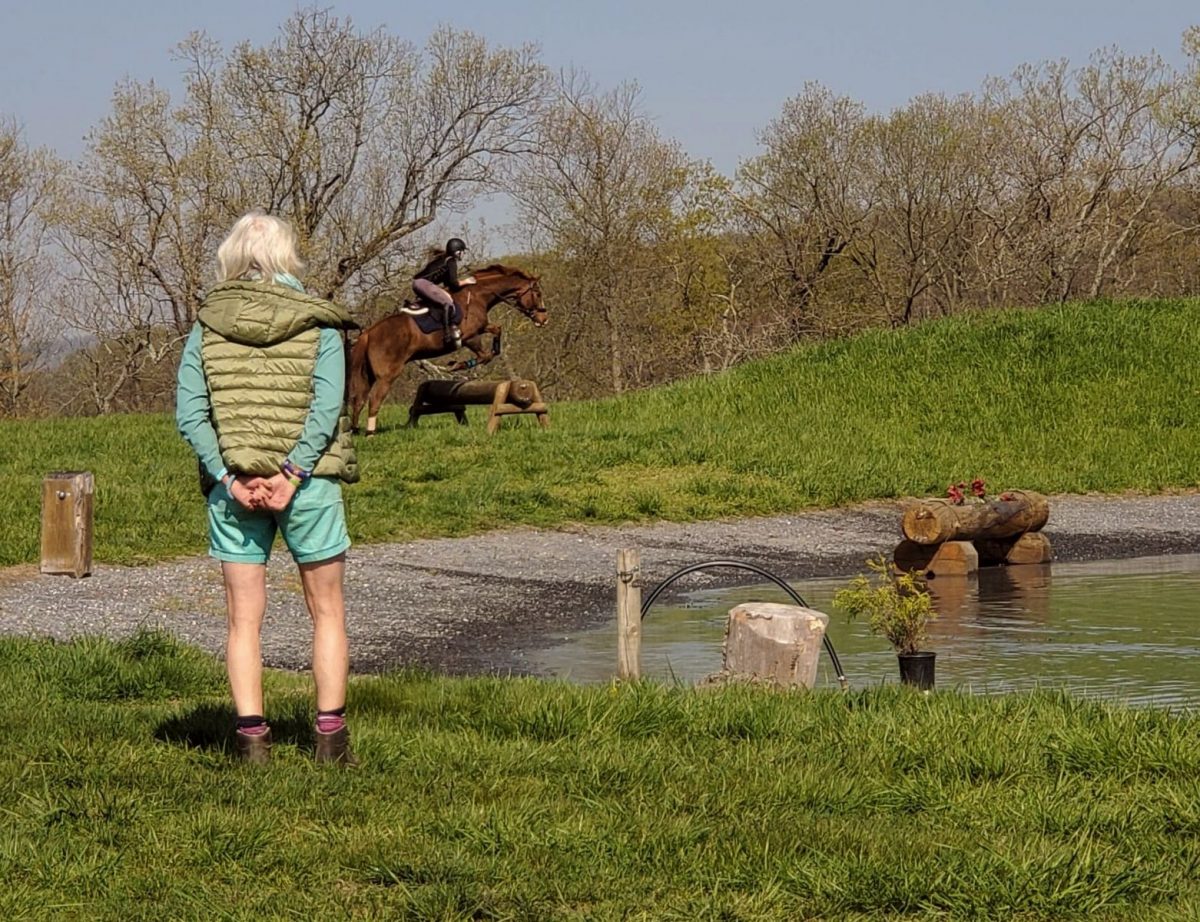 When I first arrived on the cross country field at Loch Moy Farm, I was greeted by the strange sight of a small group of 10 to 15 auditors standing reverently behind a woman holding a small green sphere high in the air. I quickly figured out why when I heard Lucinda’s voice crackling out of this little box. Lucinda and the riders were bedecked with a headset so they could hear her easily from anywhere on the sprawling cross country course.

As for the auditors, we were like a herd of lemmings, religiously following the small green speaker everywhere for the next five or so hours. It made for a close-knit jovial group who rotated the speaker when someone had to leave and chatted with each other during short breaks in Lucinda’s teaching.

As a former hunter/jumper rider, I wasn’t too familiar with Olympic Silver Medalist and three-time World Champion Lucinda Green, so this was my first time watching her teach in-person. She has a really funny, stream of consciousness style of teaching. While Lucinda can be brutally honest and to the point, she makes up for it by giving praise where it’s due.

#1: “You should not be teaching strides. You should be teaching your students to ride a canter that has options. The trouble with walking your distance is that you don’t ever develop your eye. The riders just go on the mechanical number they walked.”

In this clinic, riders were required to not count strides. A short stride or long stride was almost congratulated as long as the horse found their footing, jumped where they were confident, and the rider stayed out of their way and respected their decision. Lucinda’s philosophy taught the students to jump a fence off of a feel and to allow changes in striding based on what the horse needed in that moment.

Lucinda repeated this phrase frequently throughout the clinic and it was news to my ears. I have spent nearly two decades riding happily around on flat ground (former hunter/jumper rider here, can you tell?). But, according to Lucinda, being able to handle changes in terrain at any gait makes for a great rider. I immediately added work on hills at all gaits to my to-do list.

#3: “If he’s not happy in his bit, it’s very difficult to get the feeling of his brain in your hands.”

One high-headed horse had a tough time jumping off a drop and down into the water. Lucinda was able to determine that he was avoiding his three-ring bit by carrying his head up in the air. When he approached the drop, he couldn’t see it and had no idea it was even there. Essentially, the horse was so distracted by his bit that he couldn’t focus on what was happening in front of him.

A bonus takeaway from this exercise: Lucinda is not a fan of three-ring or two-ring bits. In her experience, very few horses go well in them.

No hunter perches here, folks! Lucinda encouraged her riders to keep at least three-quarters of the horse in front of them. Truly epitomizing riding from the hind end, these riders really sat back and kicked on. The result: horses who wanted to jump and riders who stayed safely out of the way.

While Lucinda encouraged forward-thinking horses, she never wanted them to be run off their feet by an overly-enthusiastic rider. Similar to her mantra of “Have you seen it? Take me to it,” she really emphasized the importance of creating a horse who would truly hunt the jumps.

#6: “Remember, no horse ever knows where he’s going. He hasn’t walked the course.”

After a few horses balked at a surprise fence on the other side of a hill, Lucinda coached these riders on the importance of making it clear to the horse a fence was coming up. How? According to Lucinda, you have to figure out a way that works for you and your horse by yourself.

#7: “If you make a big deal of something, then the horse starts fighting you, not the water or the bank.”

Lucinda did not want her riders to pick fights with their horses over a refusal or hesitancy to go over an obstacle. While she did encourage the well-timed use of the crop (BEHIND the leg, NOT on the shoulder!), she had no use for over-reprimanding or reprimands that served no purpose.

#8: “If you run out you can’t ride, if you stop you can’t kick. In trot you have twice as much chance as getting over a fence. In the canter, you’ve got two legs on the ground at once.”

Our group of auditor-lemmings gasped at the harshness of this first sentence that crackled out of the little green speaker, but Lucinda made up for it with lots of well-earned praise. After one young rider and horse repeatedly had a run out at a particularly tricky downhill skinny combination, she coached them through it by having them school the fence in the trot. According to Lucinda, two legs on the ground at once, such as in a canter stride, give the horse twice as much power to run out or refuse.

#9: “Wait until they go ‘shit’ before you ride. Only when the horse goes ‘oh shit’ then you start riding. Sit behind the shit.”

I told you Lucinda was hilarious, right? Here, Lucinda was helping a group of riders ride the “oh shit” moment a horse has when they lock in on a big jump and have a small bauble in their confidence. After that moment, it’s the riders job to kick on. Before that moment, your kicks won’t matter because the horse doesn’t know where it’s going yet.

#10: “There’s nothing more dangerous than a horse that doesn’t get up off the leg and go.”

Lucinda said a horse that won’t respond to leg aids is more likely to run out, refuse, get caught in a jump, or hesitate. When you’re galloping at solid fences on the cross country field, few things are more dangerous than that.

Bonus:
“The wonderful thing about being old is that you remember the top riders when they were bloody useless.”

No matter what discipline you ride, if you have the chance to see a Lucinda Green clinic, do it. This clinic was sponsored by Succeed Equine, who gave a free three-month supply to the Most Impressive Rider of the clinic. Congratulations to Kelly Adams!

Veronica Green-Gott has been riding for nearly two decades, the majority of which was spent competing in the equitation ring. Currently, she’s training her 6 year old off-the-track thoroughbred, LB, to hopefully one day compete in eventing, but mostly they focus on teaching her to use her brain and mind her manners. Veronica combined her two passions for writing and horses into her company, Golden Fleece Farm Marketing (gffmarketing.com).