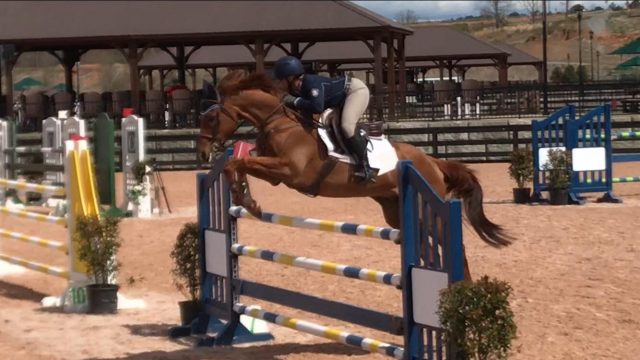 It has been nearly three years since Colleen Rutledge’s legendary four-star partner Shiraz completed the final horse trials of his storied career, finishing 14th at the 2015 Rolex Kentucky Three-Day Event.

A horse who thoroughly loves having a job, Shiraz retired sound and has remained in work ever since to keep him happy. Now 20-years-old, Shiraz recently returned to the show ring to jump the colored poles and prove that age is just a number.

John Michael “JM” Durr, whom Colleen recently started training with in show jumping, had the idea for Shiraz, better known as “Luke,” to return to jumping in a competitive atmosphere.

“JM has been helping me with Covert Rights, and he wants me show jumping at 1.30m height as much as possible,” Colleen said. “When he saw a video of Luke jumping at home, he suggested we start jumping him at shows.”

Luke officially returned to the show ring last month at the $15,000 Ocala Horse Properties Eventing Prix Invitational at Southern Cross Equestrian in Ocala, Florida, where he jumped in the $1,000 1.15m speed class.

Watch below for a video of Luke in the 1.30m Open Jumper Stake courtesy of Brian Rutledge. Luke had one rail down in a time of 67.007 seconds to finish fifth. (Shout out to fellow eventer Doug Payne and Vandiver, who won the class.)

“He thinks that this is the time of his life, and the best part is he doesn’t have to do dressage anymore,” Colleen laughed. “You gotta love a horse that wants to do a job 110 percent.”

Luke’s stint in the jumper ring is now his third successful career. He completed six CCI4* competitions during his eventing career, and became the first horse in history to complete every CCI4* in the Northern Hemisphere, which he did without any cross country jumping penalties.