The potential 13th Triple Crown in history is on the line with Justify the heavy favorite, poised to make history. Take a look at the entire field, and vote in our poll for who you think will win! Originally published on EN sister site Horse Nation. 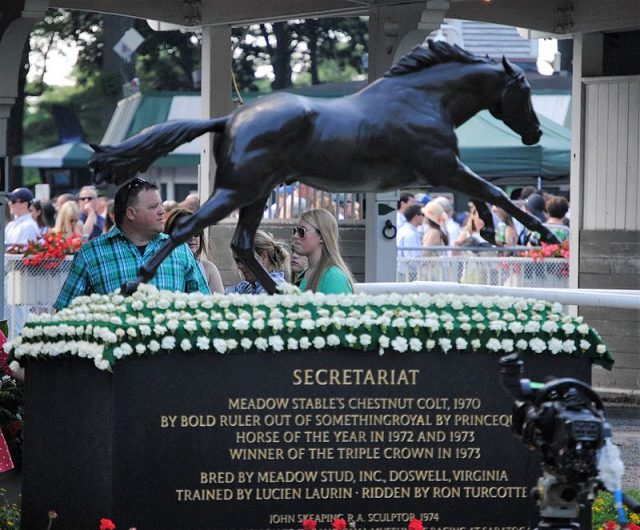 The Secretariat statue at Belmont Park, honoring the horse who achieved probably the most memorable Belmont victory in history. Photo via public domain.

The historic 150th running of the Belmont Stakes takes place this Saturday in Elmont, New York and it’s a biggie: undefeated Justify could make history as the 13th Triple Crown winner if he can conquer the Test of the Champion over a mile and a half on Belmont Park’s notably wide, sweeping track. Nine other entries are prepared to foil that attempt, well-rested and trained to perfection — take a closer look at the field and vote for your favorite below!

What is left to say about Justify? Critics were doubtful that a relatively untested, green colt could hack it in the Kentucky Derby but Justify went out and won rompingly. The critics raised their voices again when the colt appeared to suffer a stone bruise after his Derby victory; again, Justify silenced them in a particularly tough Preakness Stakes. Again, critics raise doubts about the colt’s ability to go a mile and a half, or else point at the late closers that nearly caught the colt at Pimlico, but the colt is honed, tested, fitter than ever and appears to be at the peak of his game. On Saturday, we’ll know one way or another if the colt truly deserves to be a champion.

Post Position 2: Free Drop Billy (30-1)
Chestnut colt by Union Rags
Owned by Albaugh Family Stables
Trained by Dale Romans
Ridden by Robby Albarado
Claims to fame: winner in the Claiborne Breeders Futurity, second in the Sanford Stakes, Hopeful Stakes and the Holy Bull, third in the Gotham and the Blue Grass, sixteenth in the Kentucky Derby

Free Drop Billy has shown improvement as his races stretched in length, but got caught in the cavalry charge of the Kentucky Derby. Sitting out for the Preakness, Free Drop Billy should presumably be well-rested and ready to play; whether he’ll continue to improve as the race length stretches to the mile and a half may be a tall order.

Amidst a field of fresh shooters, Bravazo, like Justify, will have run in all three Triple Crown races, and his hard-closing second place finish in the Preakness certainly turned a lot of heads at Pimlico. Wayne Lukas is a living legend as far as trainers go, so it can be expected that Bravazo will be in peak fitness to face his unfinished business from the Preakness.

Hofburg is a lightly-raced colt, with just one juvenile start and one allowance win this year, but he ran a strong second in the Florida Derby and held his own in the tough Kentucky Derby. Without much racing history to go on, he nevertheless has a cadre of fans who likely look to the success that other Tapit sons have had in the Belmont in recent years.

Restoring Hope may be just living on hope in order to keep up in the Belmont Stakes, with a light career so far and a disappointing 12th-place finish in his most recent graded stakes start. He’s from the same stable and trainer as last year’s breakout late-summer star West Coast, but has big shoes to fill.

Only recently transferred to Chad Brown’s stable, Gronkowski will be making his first start in North America after a disappointing scratch in the Kentucky Derby due to mild illness. It’s an interesting combination of factors that make Gronkowski a bit of a dark horse, and it will be fascinating to see if the stars align in the colt’s favor on Saturday.

Another hard closer on Justify’s heels in the Preakness Stakes, Tenfold sat out the Kentucky Derby but certainly proved himself worth the consideration in the classics. Well bred to tackle the mile and a half distance, Tenfold could again prove to be a late threat to the favorite.

This Pletcher trainee sat out to the Preakness in order to be better prepared for the Belmont, and with a pedigree to go the distance, he’s got a lot of factors working in his favor.

Critics were curious if Noble Indy could go the mile and a quarter in the Kentucky Derby despite his (shorter) Louisiana Derby win, and with a dismal 17th-place finish it’s worth noting that perhaps the mile and a half may equally be a tall task.

As a brand-new shooter, Blended Citizen certainly needs to step it up to contend with the likes of Justify … but longer shots have won before.