It was a case of mistaken identity for chestnut mares that gave a glimpse into the future. Catie Cejka went to school a client’s experienced eventing horse this winter but instead grabbed a different chestnut mare. To this point, the rising 4-year-old Canadian Warmblood mare Valiane (Valentino x Joey) had been lightly backed but was not anywhere near the caliber of the horse she thought she would be riding.

“She hadn’t been out and handled for six months and was actually able to stay with me for the whole time and trust me,” Cejka said.

There were a total of 31 yearlings, 2-year-olds, 3-year-olds, and 4-year-olds that presented before FEH championship judges Marilyn Payne from New Jersey and Katie Rocco from Massachusetts. That represented significant growth from the previous USEA FEH West Coast Championships—21 in 2019, 19 in 2020, and 18 in 2021.

For the FEH 4-year-olds, they were judged under saddle and for conformation on Friday and then in the jump chute arena on Saturday. Valiane was fourth heading into the jump chute, and her jumping score of 86.5 jumped them to the win with a final score of 82.6.

Coincidentally, Valiane will continue to learn to event with Cejka and may eventually partner with 16-year-old Hanni Sreenan, the rider of Zena, the horse Cejka mixed up with Valiane in the winter.

“Hopefully, she might be the kid’s move-up move-up horse, or I might get to ride her,” Cejka said. “I think they’re a little shocked with how well she’s doing.” 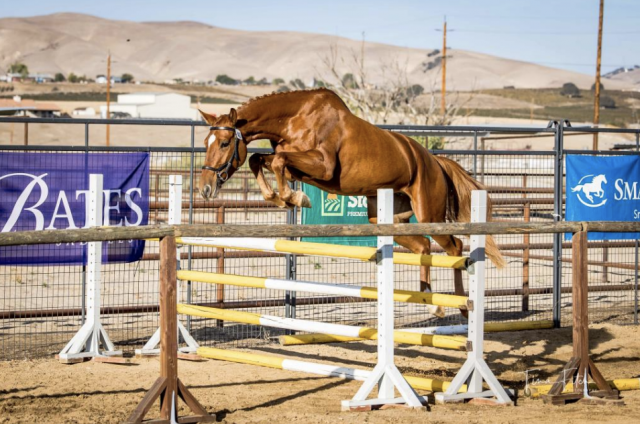 For the FEH 3-year-olds, they were presented in-hand and at-liberty for judging their conformation and gaits before going through the jump chute. Secret Romance was the only entrant to score in the 80s for both conformation and jumping and finished on a final score of 81.3.
“When the pandemic started, I decided to look for something really nice,” owner Lloyd said. “I could not afford a 3- or 4-year-old going. So, I saw her baby pictures, and I ended up purchasing her at 9 months old.”

A lot of factors went into choosing Secret Romance, according to Lloyd.

“Beautiful head, very uphill movement, her dam’s pictures were beautiful,” she said. “I didn’t know a lot about the bloodlines, but I liked the dark bay, and I like mares especially. And, the name just seemed to be a good name. So, I went with it.”

The good feeling paid off, with Secret Romance steadily improving each of the three times she has competed in FEH events at Twin Rivers in 2022.

“At the beginning of the year, she was wild when I brought her for the first time,” Lloyd said. “She’s not a very confident lady, and the second time showed some improvement. I was really impressed with her how she handled herself, and I was just hoping for the best really.” 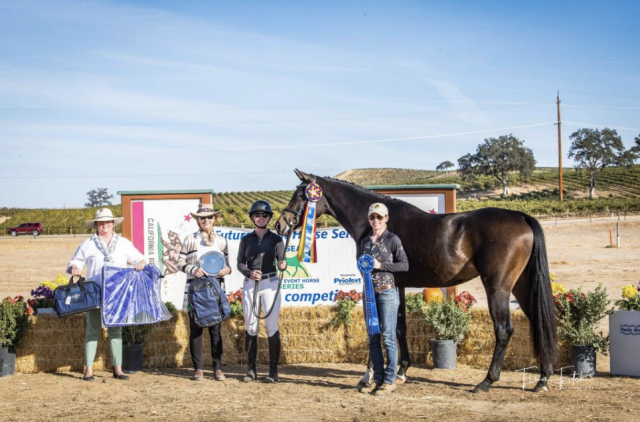 The Jockey Club Thoroughbred Incentive Program award for the highest-scoring Thoroughbred in the 2022 USEA FEH West Coast Championships went to Gemma-Cieli Richards’ Tappington (Eddington x Tap the Till), a 2-year-old chestnut gelding that was race training at Golden Gate Fields as recently as last month.

The FEH competition had people at Twin Rivers not only excited about the future for the talented young horses but also for future of the FEH series.

“We’re thrilled with how this program is growing on the West Coast and look forward to what’s in store for the future,” said Connie Baxter, organizer of events at Twin Rivers.

There were 18 5-year-olds and 12 4-year-olds competing, representing the largest YEH field in the history of the West Coast championships since they were first held as a standalone event in 2020.

That’s Me Z, a chestnut Zangersheide gelding that Greengard owns together with Andrea Pfeiffer, debuted in USEA recognized events earlier in October, competing at Novice at Woodside and Ram Tap in California before taking on the best 5-year-olds on the West Coast as part of the event that culminated 34 YEH qualifiers and the Dutta Corp. USEA YEH East Coast and West Coast Championships.

“We’ve had him like a month or so,” Greengard said. “I was just excited to have him out, and the cards were going to fall where they fell. He’s a lovely young horse, and I’m so proud of him for showing off what a nice quality horse he is.” 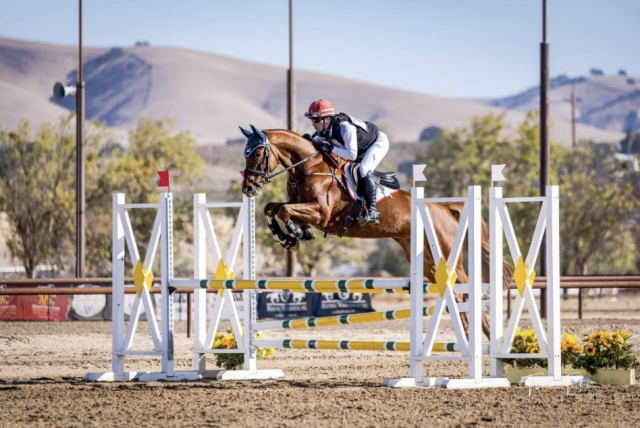 That’s Me Z and Greengard tied for the best dressage score of 16.8 out of a possible 20, followed by a score of 7.9 out of 10 for conformation and type on Friday. Then, on Saturday, they added the best jumping score of 60.6, which included having the best cumulative scores for both stadium jumping and cross country efforts. Their final score of 85.3 topped the 84.2 by the East Coast 5-year-old champion, chestnut Trakehner gelding Sky Moon (E. H. Sixtus x Pr. St. Sky Lady) ridden by Boyd Martin. That could put That’s Me Z and Greengard in position to be awarded the prestigious Holekamp/Turner Young Event Horse Lion d’Angers Grant should they qualify for the FEI World Young Horse Championships at Mondial du Lion when the horse is 7.

Just like how That’s Me Z and Greengard represent a new partnership, so too did the 4-year-old West Coast champion Natagho-w and Joly.

“Amber Birtcil owns him through Cellar Farm, and she got him in Holland earlier this year,” Joly said. “He just got to America a month ago. This was her intention, and I get to be lucky enough to go along for the ride.”

Their first USEA recognized event together was the Last Chance Qualifier held on Thursday at Twin Rivers. They had the best score among the nine 4-year-olds. In the championships, they moved up from sixth after dressage and conformation to first with the best jumping score on day two. 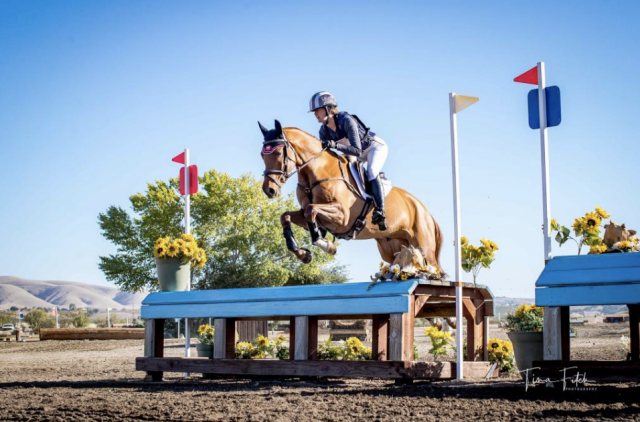 Cindy Hahn’s German Sport Horse gelding Tristan (Titulus x Elaisa) ridden by Michele Pestl, the leader after dressage and conformation, was reserve champion 4-year-old. Christy Garcia’s Thoroughbred gelding Wynnville ridden by Ella Garcia was third, as well as being the winner of the Go Get ‘Em Award presented by Stillwater Farm in memory of Don Trotter for the best gallop score and the Born In America Award presented to the highest-scoring American-bred horse.

The growing popularity of the Dutta Corp. USEA YEH and FEH West Coast Championships reflects the
vision of the Baxter family at Twin Rivers.

“It’s my vision to make it look and feel like an FEI event for these young horses,” Andrea Baxter, a member of the USEA’s YEH and FEH committees, said before the championships. “They’re only young once, so it’s a unique opportunity for these special young horses to show themselves off.”