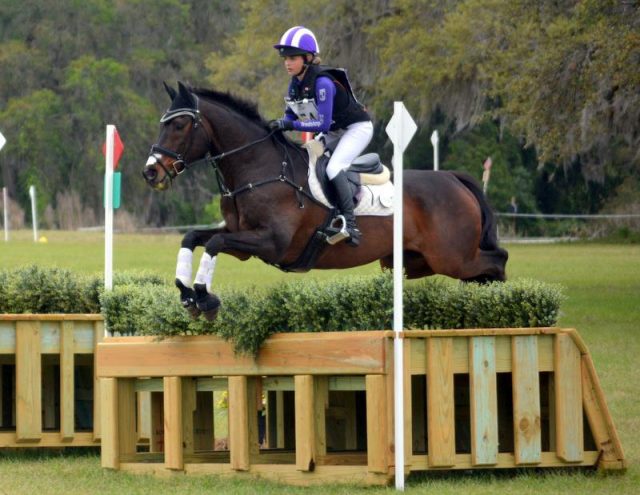 At 22-years-old, four-star veteran Relentless Pursuit is showing 13-year-old Amanda Gardiner the ropes. After a successful winter season spent competing in Ocala, Amanda completed her first Preliminary aboard Relentless Pursuit at Rocking Horse Spring Horse Trials, and it’s clear both horse and rider are having a blast.

It’s a slower pace of life for “Rover” but one he is enjoying immensely. A Thoroughbred who raced 11 times under the Jockey Club name Super Rover (A Lee Rover X Sumptious Gal, by Super Hit), he started a new career when Dana Widstrand pulled him off the track as a 3-year-old.

Dana had only competed at Novice level prior to getting Rover, and they successfully went through the levels together, winning two-star team gold at the 2006 North American Junior & Young Rider Championships and finishing ninth in their CCI3* debut at the Jersey Fresh International Three-Day Event in 2007. 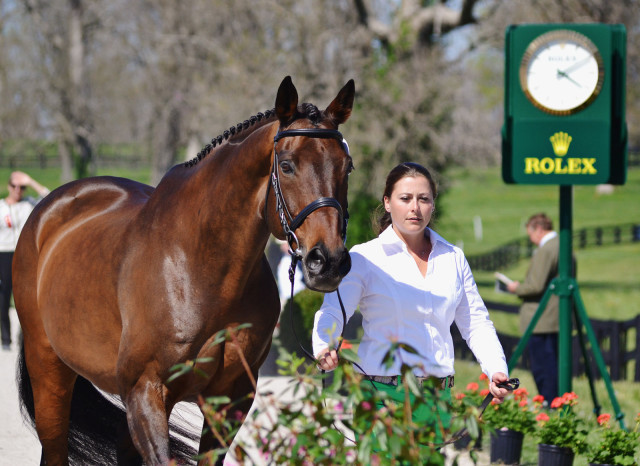 Dana Widstrand and Relentless Pursuit at their Kentucky debut in 2014. Photo by Jenni Autry.

Rover was only ever meant to be Dana’s Young Rider horse, but his love for cross country made it clear he had bigger fences in mind. Rover made his four-star debut as an 18-year-old in 2014 at the Rolex Kentucky Three-Day Event and returned the following year at age 19. When Dana decided to step away from competing in 2015, Rover was far from ready to retire.

“I knew when I took a step back from competing that he wasn’t done,” Dana said. “Right after Kentucky in 2015, I went home to Massachusetts and let a friend run her first Training on him, and I thought maybe he does want to have a job still.” 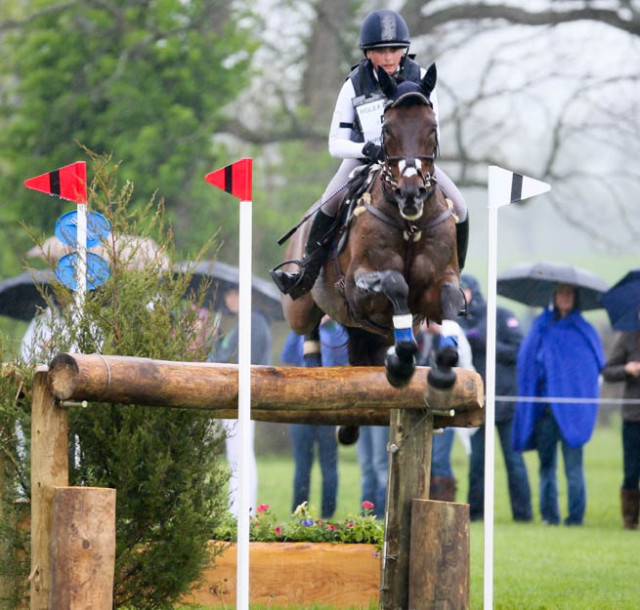 After a successful short-term lease to a lower-level home, Dana began to look for a rider to lease Rover through his golden years. She called New Hampshire-based Megan Gardiner, who had been her Stübben NA saddle rep when she competed.

“I told Meg, ‘He needs to have a really special situation. Do you know of anybody? It needs to be a special person,'” Dana explained.

As soon as Meg hung up the phone, she realized her 13-year-old daughter, Amanda, could be that special person. Having competed her pony, Bacon Bits, to Novice level, Amanda was ready to move up but needed an experienced partner to show her the way.

Amanda and Rover met last autumn and clicked right from the start. At their first show together, Course Brooke Farm’s Halloween Three-Phase in Sherborn, Massachusetts, Amanda and Rover dressed up as a princess and dragon for the costume class — a fitting start to what would become a fairytale partnership.

Meg, who competes her Thoroughbred Finn McCool at Preliminary level, has homeschooled Amanda in Ocala for the last four winter seasons, and they both thrive on the opportunity to travel to Florida and jumpstart the year. 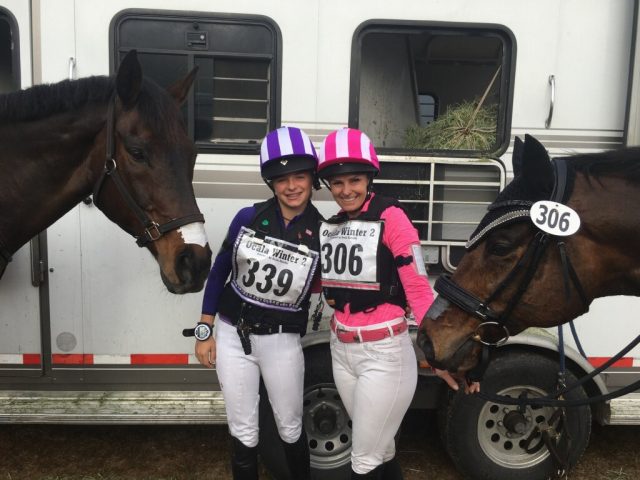 Amanda Gardiner with Relentless Pursuit on the left, and Meg Gardiner and Finn McCool on the right.

Meg and Amanda arrived in Ocala in early January with the horses in tow and ready to train with Anna Loschiavo, who Amanda said helped her immensely in the early days of getting to know Rover.

“We started cross country schooling right away and worked on our show jumping and dressage,” Amanda said. “My dressage was the hardest thing for us. Rover acts like a know-it-all, and it was tough to get it into his head at first that we had to work together.”

After a slew of lessons and schooling, Amanda made her debut at Training level with Rover at Rocking Horse Winter I Horse Trials, where they finished fourth in their Training Rider division on their dressage score of 39.8.

Three more shows and qualifying scores at Training level later, Amanda and Rover were ready to make their Preliminary debut at Rocking Horse Spring Horse Trials, their last show of the winter season before heading home to New Hampshire.

“I felt really ready, and we had done a lot of schooling with all three phases,” Amanda said. “Everything was solid, and our dressage was getting so much better.”

Amanda and Rover scored a personal best of 30.7 in dressage, jumped a beautiful clear show jumping round, and stormed around clear and inside the time on cross country to finish in second place. As for how it felt to rider Rover around her first Preliminary, Amanda said it was a feeling she will never forget.

“Walking the cross country course the day before, I was so anxious to get out there and see how Rover would respond to the harder questions and bigger jumps,” Amanda said. “He was a rockstar.”

As for how it felt to watch her daughter compete in her first Preliminary, Meg said she is incredibly proud of how far Amanda and Rover’s partnership has come.

“It has been amazing to watch them progress and grow. He would take over more when she first started riding him. Now he is listening to her and they have a true partnership,” Meg said. “He has his own quirks and has his own little demands, but he lives for the flags. As a mom, I am so in debt to Dana for giving us this opportunity. It’s a gift.”

Dana flew down to Florida to watch Amanda and Rover’s first event and said she has been the quintessential “helicopter mom” through the winter, always checking in for updates and cheering from afar. 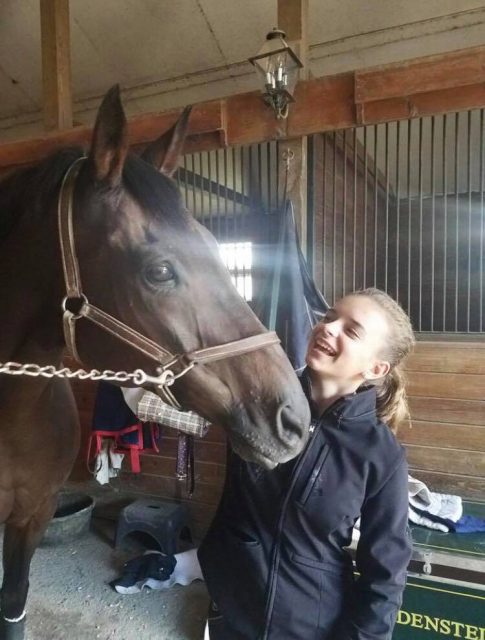 “It’s nostalgic for me,” Dana said. “Amanda is so lucky. I get to say that because he’s my child. She’s so lucky to have that horse galloping underneath her. There’s nothing better in the world than that. He just continues to love it.”

Amanda and Rover are back home in New Hampshire now with a goal to aim for their first CIC1* at the GMHA Festival of Eventing in August, and possibly a CCI1* in the fall. If Rover continues loving his job, Amanda hopes to represent Area I next year at the North American Junior & Young Rider Championships, 13 years after he carried Dana to team gold.

“I think everyone knew he was special when he made his debut at Rolex when he was 18 and went back the following year when he was 19. When he says he’s ready to retire he will, but he hasn’t told anyone that yet,” Dana said.