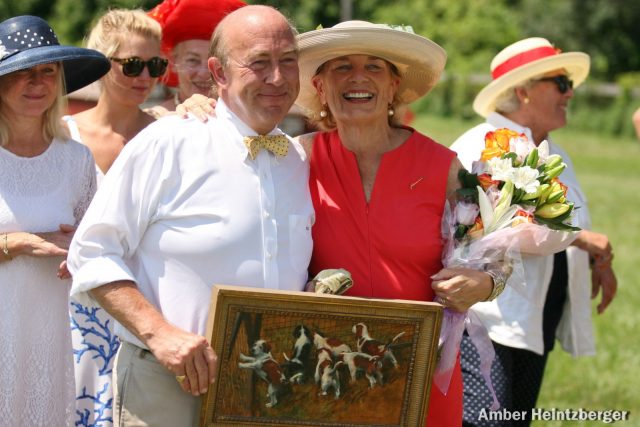 It is the end of an era as EN can confirm that after 25 years of serving as the premier lower level event in the U.S., Fitch’s Corner Horse Trials will no longer run. Organized by Fernanda Kellogg and her husband, Kirk Henckels, at their private, 150-acre farm in Millbrook, New York, Fitch’s Corner ultimately defined an entire generation in Area I.

“I feel very proud of what we were able to accomplish, but at what point do you say it’s enough?” Fernanda told EN. “My team was getting tired, and I thought after 25 years and on a good year, that’s the time to close off this chapter.”

What began as a “summer project” for Fernanda’s then 16-year-old daughter, also named Fernanda, ultimately evolved into an event that attracted Olympic riders and amateurs alike, as well as served as a highlight of the summer social calendar in Duchess County.

“My motivation was to create the best quality event for the lower levels but with the spirit of a top national or international horse trials,” Fernanda said, noting it was her daughter who coined the event’s catch phrase: “Fitch’s Corner — Ride It If You Can.” 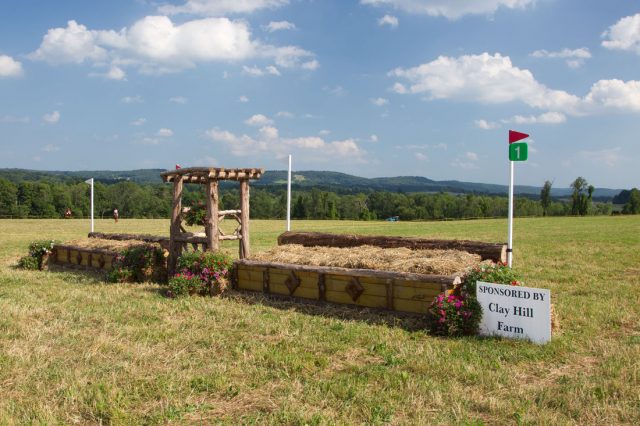 Fernanda and Eric Bull, who was 19 years old at the time and managed the farm, recruited Brian O’Connor to help run the very first event in 1993, which attracted about 50 local competitors. Brian played a critical role in launching the event and ultimately served as the official voice of Fitch’s Corner, as well as cross country controller, for all 25 years.

Fernanda knew that “great cross country courses were key to the success of a horse trials,” and she enlisted Capt. Mark Phillips to design the courses in the early years, with Eric Bull building the first course of his career at Fitch’s Corner. Chris Barnard served as the first show jumping course designer.

Derek di Grazia ultimately took over designing the cross country courses in the later years of the event, with Marc Donovan putting his stamp on the show jumping courses. Fernanda said it was an immense point of pride that Fitch’s Corner was the only exclusively lower level event that Capt. Mark Phillips and Derek di Grazia designed. 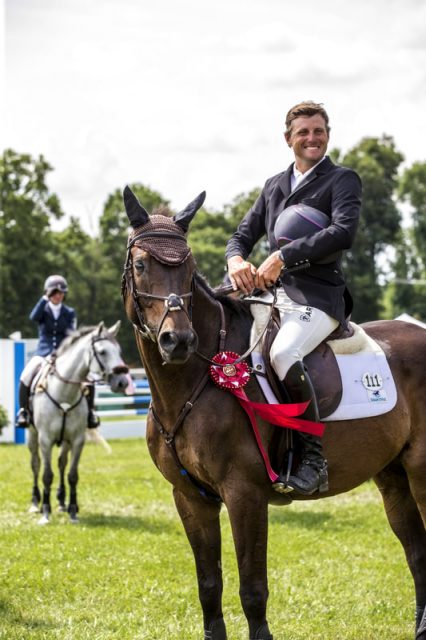 Boyd Martin was one of many upper-level riders who always competed at Fitch’s Corner. Photo by Joan Davis/Flatlandsfoto.com.

“Fitch’s Corner was the lower level event that upper level riders loved,” Fernanda said. “The confirmation of some of the upper-level riders coming to us with their lower-level horses meant I knew that we were doing something special.”

As for what stands out to her the most as Fernanda reflects on the last 25 years of running Fitch’s Corner, she said hosting the USEA Area I Championships from 2011 to 2013 will always serve as a memorable highlight.

“The three years that we ran the Area I Championships were very special because it gave us the impetus to take every part of the weekend and make it special for the competitors,” Fernanda said. “We were able to raise the profile of the event even higher thanks to the championships, and it was a real way of giving back to the area.” 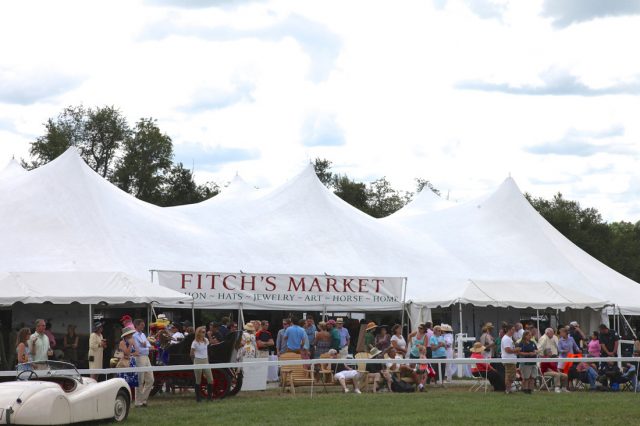 Fitch’s Market served as the backdrop for the event, with 50 shops divided into “Fashion & Home” under the big tent and “Horse & Hound” in tents along Fitch’s Boulevard. Photo courtesy of Fitch’s Corner.

The 2013 running of Fitch’s Corner drew a record 333 horses, as well as 665 people in attendance at the popular Blue Jean Ball with New York City’s DJ FLO. For as much as Fitch’s Corner was known as a premier destination lower level competition, the parties also put the event on the map as a key social event of the summer.

“A lot of people came for the atmosphere of the event but were driven by the social activities or the shopping, or just having a wonderful country weekend,” Fernanda said. “Kirk and I would always try to have the last dance at the Blue Jean Ball. It was the idea of having a wonderful summer party that was almost a right of passage for the kids in the area.”

Kirk also orchestrated a popular Collector Car Parade each year at the event, and in 2018 Fitch’s Corner played host to the prestigious Rolls-Royce Concours. The Millbrook Hunt Hounds also paraded the grounds every year during the event. 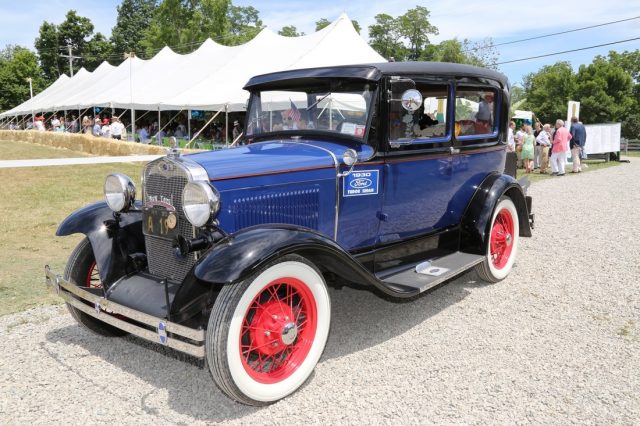 The Collector Car Parade served as a highlight of the event each year. Photo courtesy of Fitch’s Corner.

In addition to $25,000 in prize money awarded to the top finishers at all levels from Beginner Novice to Preliminary levels, winners at Fitch’s Corner also received trophies from Tiffany & Co., a nod to Fernanda’s 25-year career with the renowned jewelry company.

Fitch’s Corner also served as the host site for the Charles Owen Technical Merit Award in Area I; launched the Novice Masters Challenge; bestowed the Barbara Meyer Pony Club Award for members of the area pony clubs; and gave the Fitch’s Corner Award to honor a local member of the community for their support of equestrian sports.

Two key sponsors, Houlihan Lawrence Real Estate and Fresh Gourmet, with owners Donald and Barbara Tober, provided generous support for Fitch’s Corner and made it possible for the event to be so successful, Fernanda added. In turn, Fitch’s Corner raised more than $300,000 for event beneficiary, Millbrook Rescue Squad, over the years. 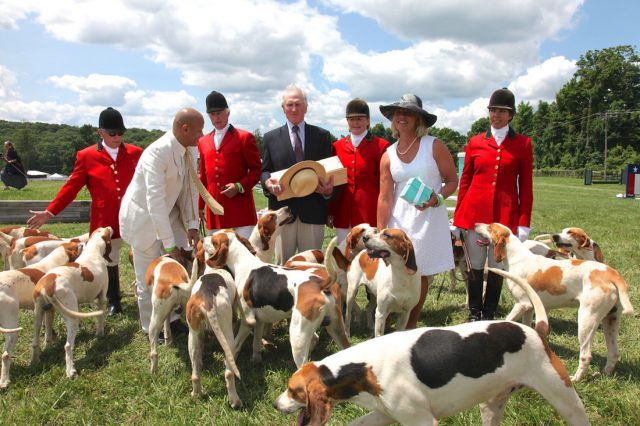 “We wanted Fitch’s Corner to be the very best event regardless of the level,” Fernanda said. “It was equally important for the Beginner Novice rider to have as good a time as the Preliminary rider, so we were always conscious of treating every rider as the single most important rider of the weekend.”

Videographer Marion Latta de Vogel filmed beautiful footage from Fitch’s Corner during the last few years the event ran. Watch below to relive the 25th anniversary weekend and ultimately the final running of this most treasured event.

To Fernanda, Kirk and the entire team of dedicated individuals who made Fitch’s Corner Horse Trials a reality, thank you for your incredible service to the eventing community.