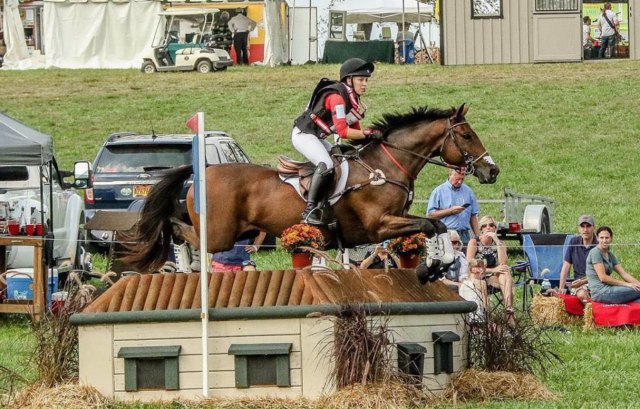 When 22-year-old Fylicia Barr first encountered her FEI 3* horse, Galloway Sunrise (“Sunny”), the main thing on her mind was how to not get hurt.

“She looked like a mule and was quite feral,” Fylicia recounts. “She kicked me the first time I met her. We (my mother, Shannon, and me) have always had to find diamonds in the rough because we didn’t have the budget to buy fancy horses. And where I grew up in Olean, New York, about an hour and a half south of Buffalo, is very rural. Mainly Quarter horses and 4H horse shows. I had been riding a kill pen rescue, an Arabian.

“When I was 13, we spotted a Craigslist ad for a $500 Warmblood yearling, so we went to take a look. She wasn’t even halter broke — the breeders were scared of her. It took us three and a half hours to get her on the trailer. We treated her like a Mustang and put her in a round pen for a week. The first time I went in the pen, she chased me out, teeth bared. I have never run so fast!”

Fylicia began her riding career at a 4H barn and showed at the 4H hunter shows. “We would really just help each other out, no formal lessons.” She enlisted the help of a local trainer, Joe Backer, to back Sunny who, at that stage, was a bad rearer. A couple years later, she re-encountered Joe who introduced her to eventing. “Joe was the first trainer to take an interest in me. We didn’t try eventing until about three years after we got Sunny.”

The path with Sunny was circuitous according to Barr: “When she was four, she had a pasture accident and ripped off most of the bulb of her heel. Blood all over the field. It was gruesome. Our vet advised us to put her down. The vets in our area deal mainly with cows, not a lot of sport horses. We weren’t ready to accept that, so we got a second opinion. She was on stall rest for a year and a half and was not a very good patient!”

Fylicia and Sunny finally began eventing, but this, too, was not always smooth sailing. “We didn’t have many places to school cross country, so most of the schooling was at the events. The first time we had to drop into water at Training level, we were eliminated. But once Sunny understood what was being asked of her, she turned into a cross country powerhouse.”

In 2015 Fylicia responded to a working student ad placed by Full Gallop Farm in Aiken. After the winter, she and Sunny ended up in Unionville, PA. She was a working student, then hustled other work riding and caring for horses, anything she could do to afford to keep Sunny moving up.

“At one point I was working for eight different people. On Tuesdays and Thursdays, I’d start working at 5 a.m. and wouldn’t get home until after nine.” She and Sunny progressed, moving up to the Preliminary level.

But it was the coaching from one of her part time employers, 3* eventer and FEI Dressage rider, Sally Lofting, that that propelled her firmly into the FEI world. Sally took her on as a working student, then after a few months, offered Fylicia the position of assistant trainer.

“2016 was a really big year for us. Sally has done amazing things for my riding. In the spring, when we were mapping out the year, Sally suggested doing the Fair Hill CCI2*. It seemed impossible — I hadn’t even done a one star. I thought she was crazy.”

Fylicia and Sunny did the Fair Hill Spring CIC1*, then the Virginia Spring CCI1* where they were second against some big names. “We moved up to Intermediate in June at Seneca Valley Pony Club Horse Trials and did five events over the summer, including the AECs. Then Plantation Field International CIC2*. We ended the season completing the Fair Hill CCI 2* which was a huge accomplishment.”

The winter of 2017 provided an opportunity for Fylicia and Sunny to really hone their skills. “Sally went to Florida in January and February with some dressage horses and I stayed home to manage the barn and ride for her.” Phillip Dutton, who lives about 10-minutes away from the Lofting’s farm, had stayed in Pennsylvania to be with his stepdaughter, LeeLee, who was recovering from a traumatic head injury. Fylicia and Sunny started weekly jumping lessons with Phillip.

She moved Sunny up to advanced at Millbrook Horse Trials and completed the Plantation Field International CIC3*. But it is Sunny’s finish as one of only 15 double clear rounds at Fair Hill International CCI2* that she is most proud of.

Fylicia recently began her own eventing training/teaching/sales business based out of Sally and Hugh Lofting’s lovely farm in Unionville, PA, allowing Sally to focus on her first love, dressage. She has a young warmblood, Amelia, in training that she is working on putting together a syndicate for. And she still keeps her eye out for diamonds in the rough. As she knows first-hand, a little polishing goes a long way.

Anne Hambleton is an Adult Amateur Eventer and the author of award-winning young reader novel, Raja, Story of a Racehorse.