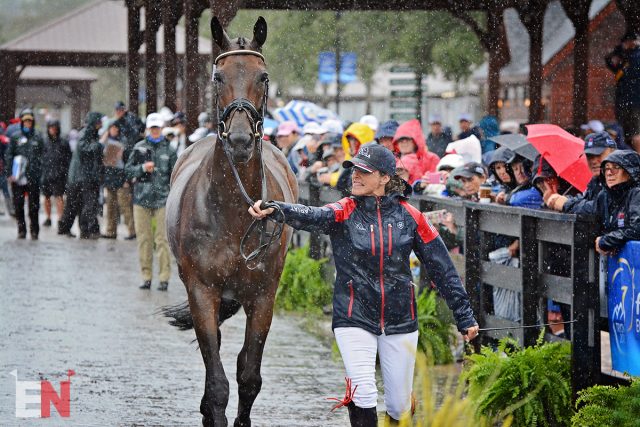 Holding the final horse inspection at the FEI World Equestrian Games in the midst of a hurricane — you know EN wasn’t going to miss that. Power is out at EN headquarters, but we were able to splash through flooded roads in Leslie Threlkeld’s trusty truck to bring you live updates from Tryon. If you didn’t follow along live on Twitter, you missed some serious drama.

It was an especially tense wait for the Irish and Dutch horses to be re-presented, as both countries had two team horses in the holding box. Cheers went up from the crowd after each of the five horses in the holding box were announced as accepted, but there was an especially hearty cheer for the Irish horses, as the team sits in silver medal position with Sarah in individual bronze position after cross country.

Cheers also went up from the crowd when the U.S. team horses were announced as accepted, and Donner nearly mowed down several people after jogging with Lynn Symansky. (We love how enthusiastic the home crowd is, but he’s very noise sensitive so let’s keep those cheers contained until after his show jumping round tomorrow.)

Show jumping will start at 10 a.m. EST tomorrow. Click here for start times. Keep it locked on EN for all the latest and greatest from WEG. Go Eventing.