Fourteen nations competed in eventing at the 2015 Pan American Games in Toronto, with 11 of them fielding a team. The fact that eight of those countries completed a team means the eventing scene throughout Central America, South America and the Caribbean is not only rapidly expanding, but also becoming much more competitive.

While we regularly cover U.S. and Canadian riders on EN, there are a number of other competitors from different countries who are equally deserving of recognition — and many of them have fascinating stories! With that in mind, here’s a look at eight riders to keep on your radar at the conclusion of the Pan American Games. 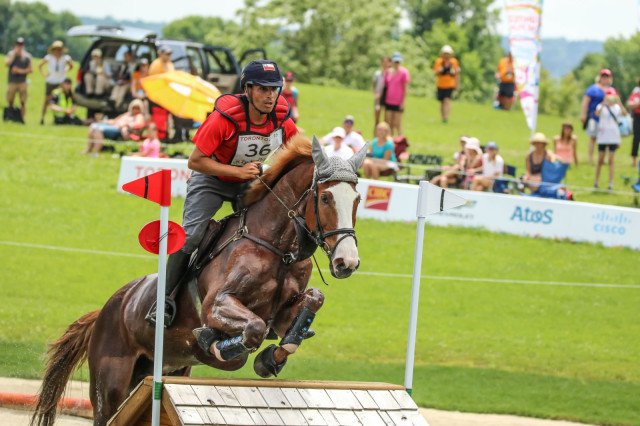 You might remember Carlos’s name from the 2011 Pan American Games in Guadalajara, where he finished in 10th place individually aboard Ranco, the same horse he rode this year in Toronto. The 12-year-old Chilean-bred gelding owned by Ejercito de Chile (the Chilean Army) has served as Carlos’s top mount since 2011. Since then, they’ve emerged as the stars of the Chilean eventing team, twice winning both the Quillota CCI2* and CIC2* events in their home country.

You always knew where Carlos was on the cross country course this past Saturday at Will O’ Wind Farm based on which way the Chilean fans were running, followed by the chants of “CARLOOOOOS!” He finished in fifth place on his dressage score of 45.3, the only rider from a country aside from team medalists U.S., Brazil and Canada to finish in the top 10. 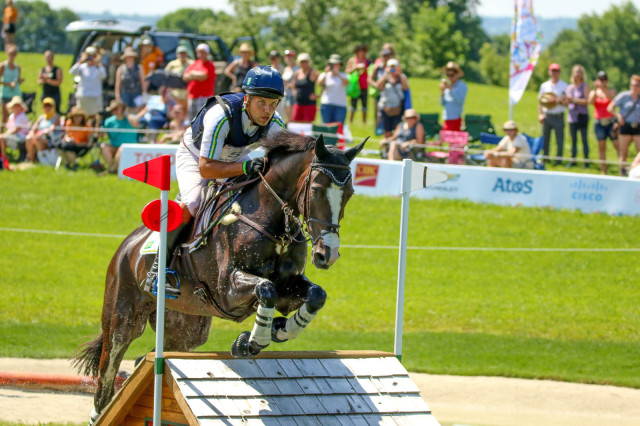 Carlos has the honor of being the highest-placed finisher of any Brazilian eventer at an Olympic Games, placing 21st at Sydney in 2000. Like fellow teammate Ruy Fonseca, Carlos is also based in England and is a regular fixture at UK events. He’s completed Badminton and Burghley, as well as competed at two World Equestrian Games in 1998 and 2006.

Since winning a team bronze medal at the 2007 Pan American Games in Rio, Carlos has been bringing a number of promising young horses through the levels, including his Toronto mount Calcourt Landline, Fiona Edwards’ 9-year-old Ango-European gelding. Carlos and “Sam” finished 11th at the Saumur CCI3* this year and are gunning for next year’s Brazilian Olympic team. 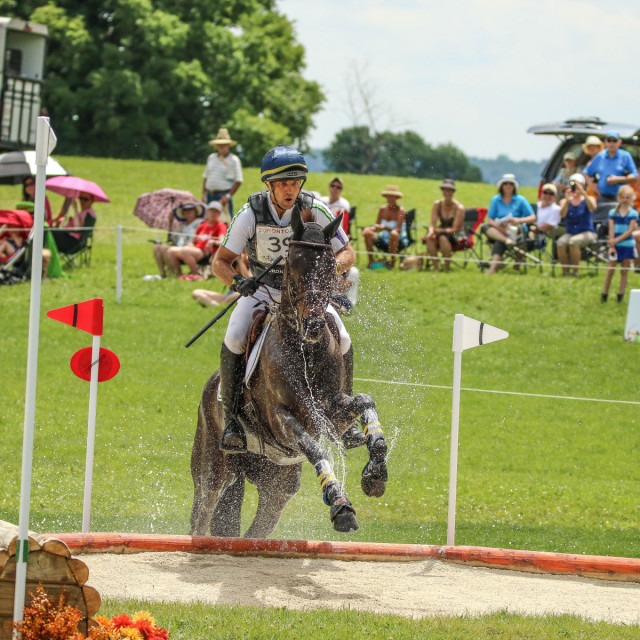 Marcio is your ultimate adult amateur. He works as an anesthesiologist back home in Brazil and also competes about 10 horses. He spent part of his season based with Mark Todd last year in the UK in the lead up to major events like Badminton, which he completed with his homebred mare Josephine MCJ.

He also represented Brazil at the 2012 London Olympics with Josephine MCJ, as well as the 2011 Pan American Games in Guadalajara, where they finished ninth individually and won a team bronze medal. Marcio has said he may postpone his career as a doctor in order to pursue eventing full time, especially with the Olympics coming to his home country next year.

His Pan Ams mount this year, Lissy Mac Wayer (pronounced Lizzie McGuire!), was previously campaigned by Thomas Carlile, Mark Todd and Lucinda Fredericks, and Marcio got the ride on the 12-year-old Westphalian mare in 2013. Marcio and Lissy finished 20th at Bramham CCI3* last year and won the Barretos CIC3* this year in Brazil. 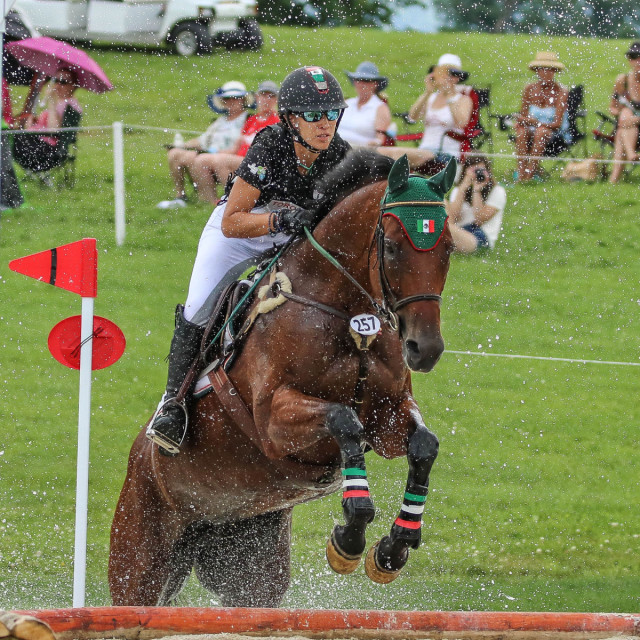 Mexican team coach Karen O’Connor calls Daniela a “rockstar,” and it’s easy to see why when you watch her tackle a cross country course. She’s gutsy and accurate in the tack, and she completed the Pan Ams as the highest-placed rider on the budding Mexican team, which Karen took over coaching in January of this year.

Daniela finished ninth individually in the 2010 Central American and Caribbean Games in Puerto Rico and competed in her first Pan American Games this year aboard Cecelia, a 12-year-old Thoroughbred mare owned by Aurelio Quinzaños and Luis Miguel Alons that previously campaigned through the three-star level with Leslie Chelstrom.

With Karen at the helm of the Mexican team, it will be exciting to see what’s next for Daniela and her teammates. Karen told EN that the team’s plan for the rest of the year is a bit up in the air right now, as the main focus has been on getting to the Pan American Games. We hope we’ll see more of talented Team Mexico soon! 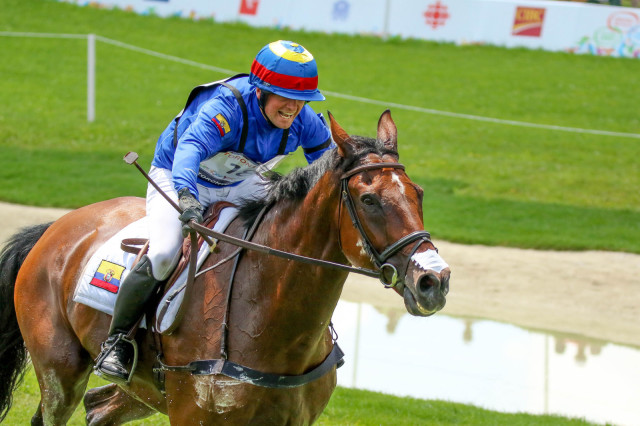 Born in Switzerland but with three different passports to his name, Nicolas represented Switzerland for 10 years before switching to ride for Ecuador in 2011. His mother, Monique Deyme, competed internationally in eventing in the 1980s and now runs the family’s Framoni Stud in France, which breeds the horses Nicolas competes.

Based in Switzerland, he competes all across Europe with his two top mounts. He’s completed Luhmühlen and Badminton with family homebred Nadeville Merze, the Selle Francais gelding with whom he represented Ecuador at WEG last year. He also completed Pau in 2011 with Onzieme Framoni, his mount for this year’s Pan Ams and another Selle Francais gelding from his family’s breeding program. 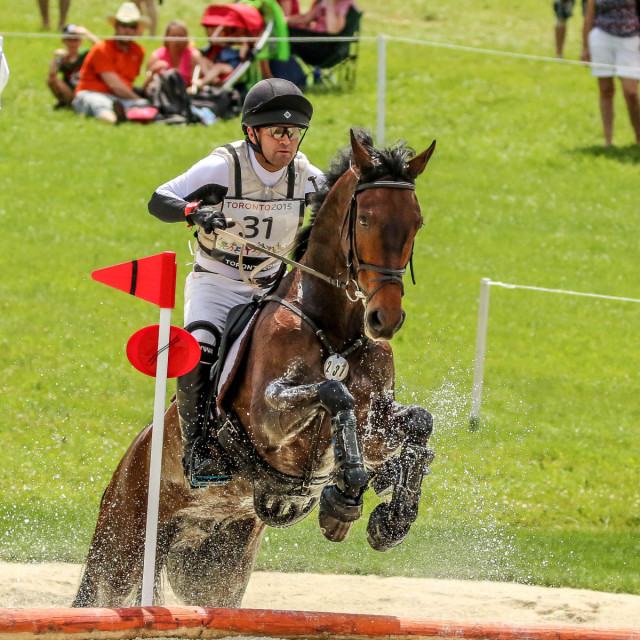 Carlos is the only member of the Ecuadorian team actually based in Ecuador. (Third teammate Ronald Zabala Goetschel is based in West Grove, Pennsylvania, and trains with Phillip Dutton.) With limited access to events in his home country, Carlos only competed at the CCI2* level three times prior to this year’s Pan Ams. One of those times was at the 2011 Pan Ams in Guadalajara, where he finished 19th individually with Que Loco.

He and Que Loco, an 11-year-old Chilean-bred gelding owned by Norton Narvarez Ordonez and Alejandro Iuna, won the CCI2* at Riobamba in Ecuador this year to qualify for Toronto. They finished the Pan Ams on a final score of 60.8, which bests their score from the 2011 Pan Ams by nearly 30 points and their best career CCI2* score by 11 points. 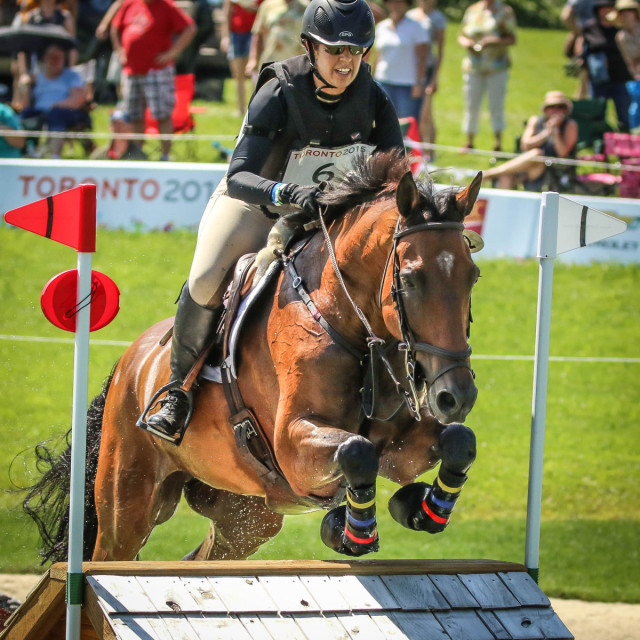 She lives in Florida for part of the year training with Kyle Carter, who coached the Venezuelan team at the Pan Ams this year. She also spends part of the year back home in Venezuela, where she has a string of show jumpers. She was one of just a handful of riders (from countries other than team medalists U.S., Brazil and Canada) to finish on her dressage score at the Pan Ams. 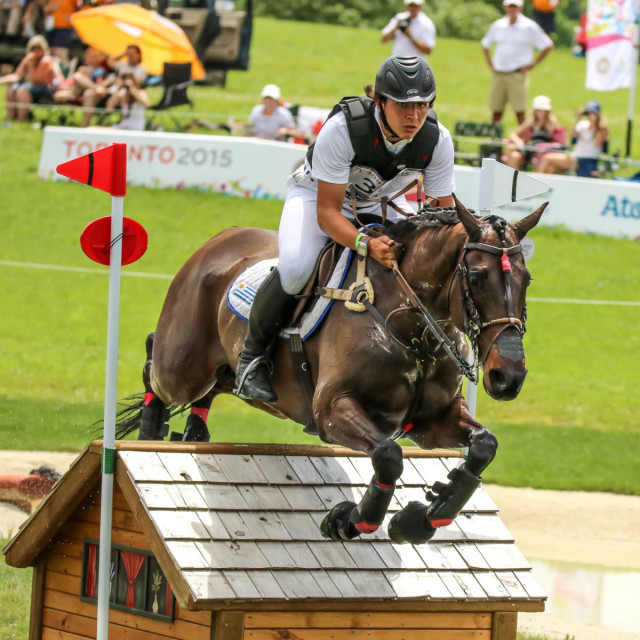 Just 18 years old, Francisco found himself sitting on an unhappy horse in dressage when his mount Noir de la Muralla, an 8-year-old Uruguyan-bred gelding owned by Raul Calvelo, wanted nothing to do with the buzzing atmosphere at the Caledon Pan Am Equestrian Park. But he went on to finish on his dressage score to complete the event as the highest-placed rider for Uruguay.

He also competes in pure show jumping and spent a winter showing in Wellington in 2014, and he competed on the South American team at the 2014 Youth Olympic Games in Nanjing,  China, where he won a team silver medal. Having accomplished so much at such a young age, Francisco is definitely a rider to watch for the future.