I have good news and bad news about my second day at TerraNova. The bad news is: the poutine food truck was not in attendance today. I know, no one’s dreams have been crushed more than my own. However, the good news is that I found an emotional support miniature horse named Nugget in the barn of John Michael Durr and immediately forgot about all my poutine woes. And boy, what a story little wry-nosed Nugget has. Don’t worry, we’ll get to that. First, let’s talk about Sunday’s competition.

The schedule kicked off with show jumping for the lower levels, which featured all the atmosphere and grandeur that had been present for the FEI divisions. It also featured something you rarely see in this sport outside of Championships: prize money and serious satin.

In addition to a total of $40,000 worth of prize money up for grabs in the FEI divisions, each horse trial division also offered $1,500 of prize money split between the top three placings. Plus, they gave ribbons (and when I say ribbons, I mean ribbons as big as a toddler, as well as neck sashes for first and second) through 8th place in the horse trial divisions and through 12th place for FEI divisions. Satin lovers, rejoice, TerraNova certainly delivers on that one.

I was able to watch most of the Training and Novice show jumping before the 3*-S cross country began. Not only were there enormous ribbons and prize money up for grabs, they also had victory gallops for every division. I’m a nothing if not a sucker for a good victory gallop (just me or does it always bring a bit of a tear to your eye?), and it gave the whole event more of a championship type feel.

Once the 3*-S was underway I headed over to see how the course was riding and scope out some of the fences. For spectators it’s very easy to go back and forth between the two areas since they’re so close together, and that’s what I tried to do as much as possible. The FEI divisions are fun, for sure, but there’s just something about the variety of horses, riders, colorful attire, and fun relationships between horse and rider at the lower levels that just cannot be beat. I mean seriously, I didn’t see a single FEI horse rocking a full glitter saddle pad, where I saw more than one at the lower levels. I rest my case. These folks are here to party, and I’m here for it.

Let’s hear it for this weekend’s top finishers!

After that it was back up to the food trucks for lunch (Hawaiian food truck to the rescue) before slathering on more sunscreen to head out for the 4*-S. By the way, it still wasn’t enough sunscreen to keep the Florida sun at bay, but was it even a horse show weekend if you don’t end up with a wicked sunburn?

No worries though, because this is where I finally encountered what was to be the ultimate highlight of my day. There I was, waiting by fence 1 for the 4*-S to begin, when I see John Michael Durr coming down from the stabling on Blue Rodeo (known in the barn as Stanley). But it wasn’t just JM and Stanley… they were accompanied by what might possibly be the most adorable animal I have ever seen on four teeny, tiny little hooves: Stanley’s very own miniature horse, Nugget.

Naturally I did what any responsible, professional reporter would do: I immediately ran away from fence 1 to video the trio as they trotted past (and ok, to be fair, there may have also been some equally professional squealing). At least I (barely) resisted the urge to abandon my assignment completely and follow after them. I did, however, immediately start scheming on how I would find the mini once he was back in the barns so that I could introduce myself properly.

Back to the task at hand. During the 4* cross country I moved throughout the first half of the course so I could see how everything was riding. All looked well from my perspective, although the first water was enough to cause some slight “bum-clenching” (to borrow a phrase from EN’s Tilly Berendt) a few times at the bounce bank. I’m willing to admit that could just be because I myself would rather jump through a keyhole made of lava than a giant up bank. Details. 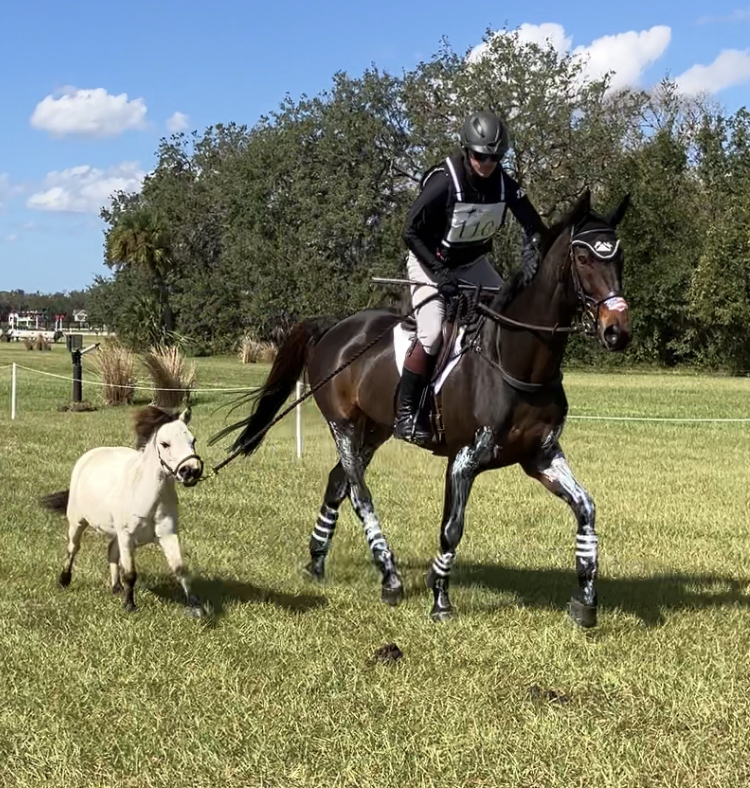 Now there’s a cross country warm-up I can get on board with. Photo by Amanda Chance.

After the cross country was finished I had one mission: track down JM, Stanley, and my new favorite mini, because that was a story I knew I just had to hear. I caught up with JM at the finish line of the 2*-S cross country, where I was able to talk to JM about Stanley and find out how exactly this whole situation began.

Blue Rodeo aka Stanley is a Dutch Warmblood cross, bred in the USA by JM’s vet, Anne Baskett. He is by 1.60m showjumper stallion Peter Pan out of Sophie, who has show jumped to 1.30m herself (also with JM Durr).

Stanley was originally meant to be a mount for Baskett, but proved to be a bit too much of anxious, spooky, and worried type. JM admits that originally the horse was not his favorite, but says “now in a lot of ways he’s really become my favorite horse.”

It turns out that what Stanley needed was a bit more of a challenge, and as he came into his first year of competing at the Advanced level, he finally started to settle into his job. “The fences finally got his attention enough that he wasn’t spooking at everything like he did at Novice and Training,” JM said.

Even as he moved up the levels, though, things didn’t always look so certain for Stanley. After a particularly difficult show at Tryon, where the horse took exception to a very slightly misplaced dressage arena board and “melted down”, JM knew it was time to try something different. Stanley has always been an anxious horse at shows, not wanting to eat and sometimes even attempting to scale the stall walls. It was to the point where they either needed to find a way to help him mentally, or find him a new career. “It was either the pony, or we were going to stop. He’s always loved the job, but he just couldn’t get out of his own way.” 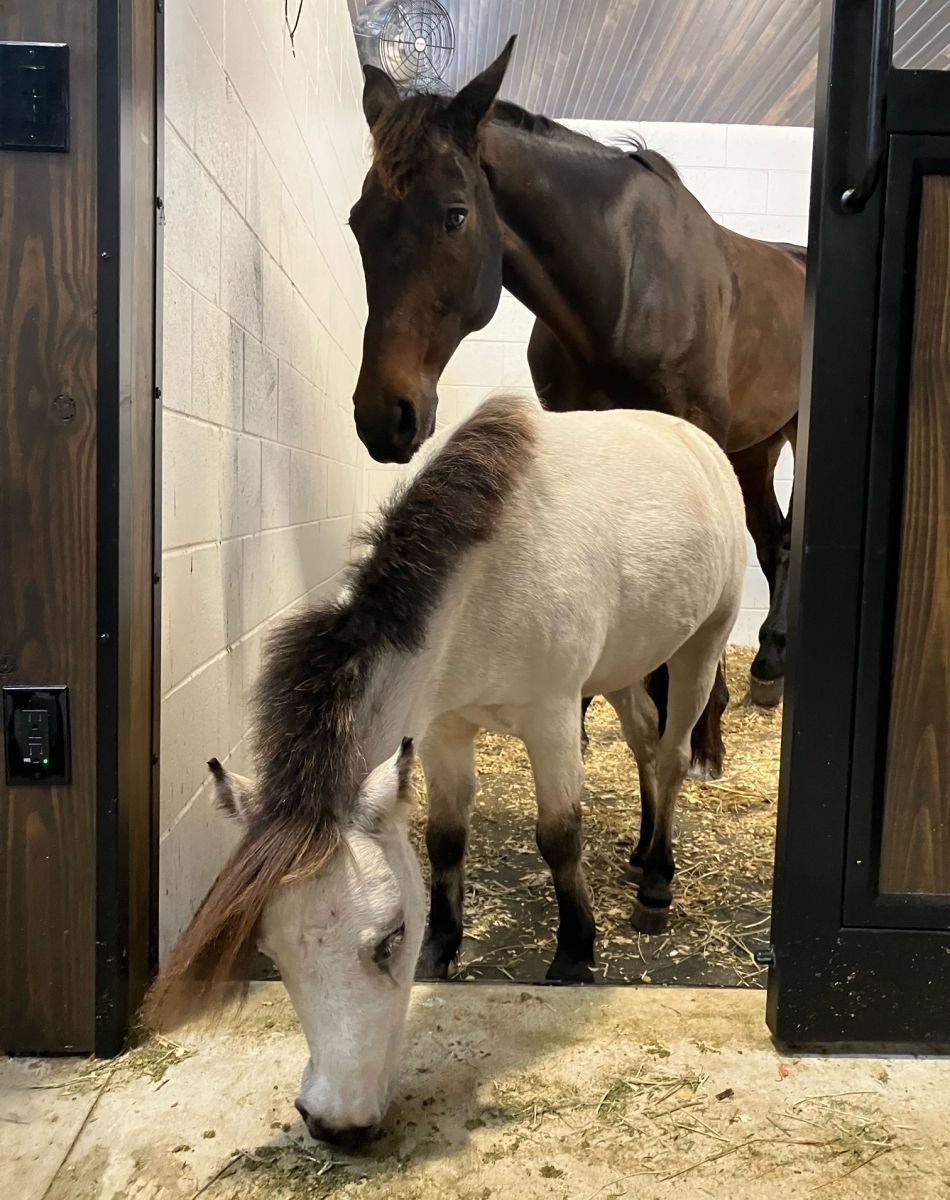 A match made in heaven? JM and his crew sure think so. Photo by Amanda Chance.

Nugget accompanies Stanley pretty much everywhere he goes both at home and at horse shows. The warm-up ring, AquaTred, trot and gallop sets (Nugget supervises those more than participates, because Short King legs), hacking – you name it, Nugget is there. They live in the same stall and for all intents and purposes are perfect BFFs. It’s a friendship that’s made all the difference in the world for Stanley, who now happily stands in his stall at shows with his best friend Nugget, both of them dozing together or munching on food.

After our chat, JM invited me down to the barn to meet the mini, so I hopped on the back of his UTV and off we went (note to anyone that might want to kidnap me: this is how). Once there, JM’s groom, Mackenzie Moran, was more than happy to introduce me to Nugget. By the way, his FEI passport has his show name as “Rodeo Clown”… get it? Blue Rodeo, Rodeo Clown? There may have possibly been another very professional squeal on my part when that was revealed.

It’s obvious that Nugget is truly a loved and valued part of the Durr Eventing team, and #supergroom Mackenzie even braided him for dressage this week. Can’t go down to the warm-up ring looking anything less than his best!

What makes Nugget even more heartwarmingly adorable is the fact that he’s got a wry nose, a congenital abnormality that causes his nose to be crooked. If you ask me (and probably Stanley), it just adds to his charm.

While JM and Stanley had an unfortunate blip on cross country today when Stanley got a bit distracted by a tent and just didn’t get his eye on a corner until it was too late, JM still says “this and Morven are probably the two best runs he’s ever had. That was my mistake today, the horse feels great.” 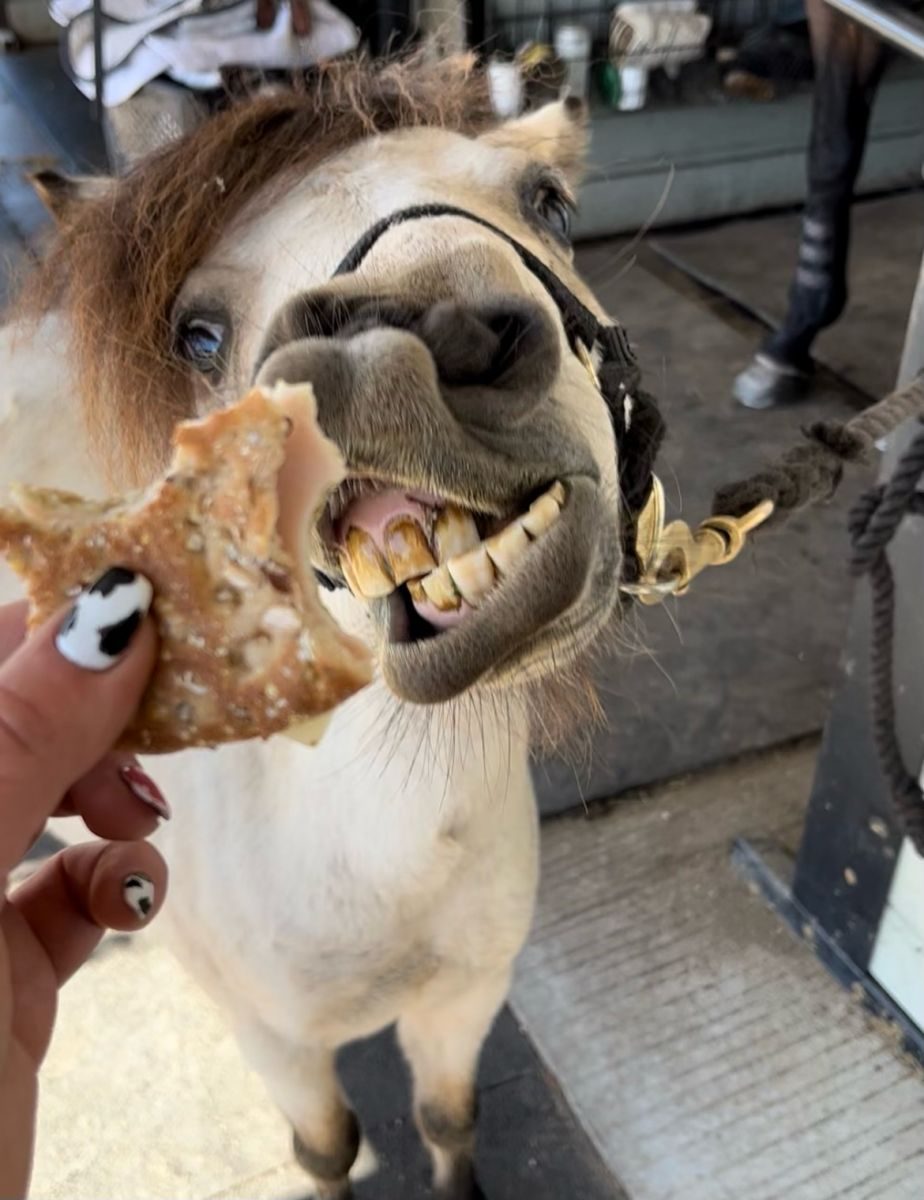 One more nugget of nugget, for posterity. Photo by Amanda Chance.

When asked why he chose TerraNova over other possible options this fall, he was quick to credit the layout and the venue. “This is similar to what we’re seeing for Championships, and you’ve got to support these venues that are going to get us ready to send teams to Championships. You also need tracks like this to support the ticket sales, where people can see everything. It’s a wonderful compliment for the fall calendar that I think is really important and unique, and we’ve got to support it.”

Having now experienced my first event at TerraNova, I can now see what he’s saying. It’s a class venue that puts on a very good event, with all the atmosphere and bells and whistles to put them in the top tier. It was my first weekend at TerraNova, but it won’t be my last. Especially if Nugget and Stanley are coming back… new #1 fan.