Family is such an important part of my life, and I love to see when families work together in something.  A good friend of mine, Hillary Irwin, lives about 10 minutes from my farm.  She, too, is an up and coming eventer, and I think that her family’s story is really interesting and inspiring. All photos used by permission of Hillary.  Here is their story… 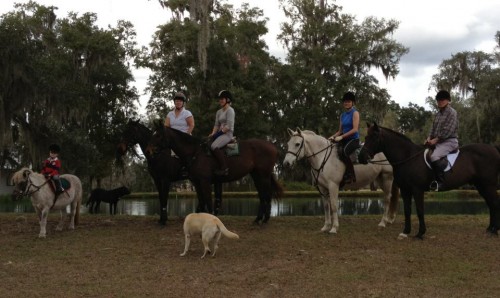 The Cotter family lives in Alachua, FL, about an hour from Ocala.  Julian and Dianne have been breeding TB racehorses since 1974.  It all started when their oldest son decided that he wanted a horse just because his siblings wanted one.  Little did they know, that the purchase of a pregnant mare would start a family tradition that has lasted for 38 years and counting! 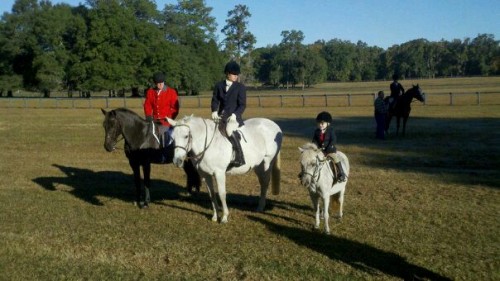 Snooty Fox Farm is the name of their place, and their jockey silks can easily be spotted in red and green.  Julian and Dianne just have a small breeding business, breeding only one or two foals a year with this year being their biggest crop at three.  One of the mares, Miss Tullamore Dew, is bred to Animal Kingdom’s sire, Leroidesanimaux, for next year. The Cotters started by naming all of their foals after their children and grandchildren.  For example, Hurry Home Hillary, was named after their grandaughter, Hillary Irwin.  When they ran out of children and grandchildren for names, they started naming most of their foals after Irish whiskey.  (thus Tullamore Dew)  They take great pride in their horses and want the best for them. 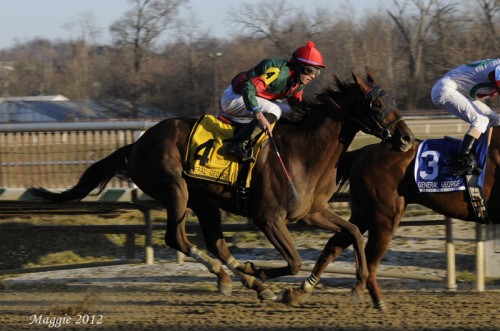 Hurry Home Hillary went on to foal out Bellamy Road, who went on to win the Wood Memorial by a record 17 1/2 lengths!  Later, Bellamy’s son, Toby’s Corner, went on to win the same race, upsetting Uncle Mo, last year.  Toby, trained by Graham Motion, was also bred by the Cotters and is still owned by them.  The story behind Toby’s name is quite cool.  Hillary (the person, not the horse) had an old pony named Toby when she was younger.  Everyone loved Toby, and he had a large stall in the corner of the barn.  Julian decided to have a plaque made for the stall that said, “Toby’s Corner.”  Years after the pony’s death, a stunning chestnut colt was born in that stall, and Julian decided that they should name him “Toby’s Corner.”  They have high hopes that Toby will come back and race well after his injury last year and go on to have a good career standing as a stallion. 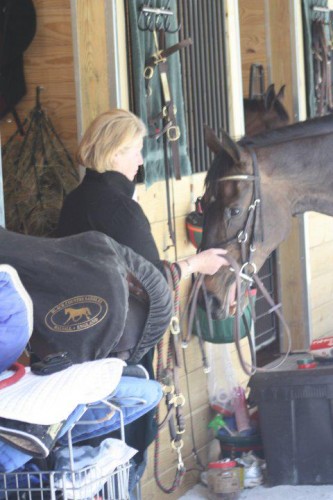 Carrie (Cotter) Irwin, getting Clifden ready to jump for Hillary. Carrie is Hillary's groom, cheerleader, and coach from the sidelines.

The Cotters had 3 children.  Carrie and her younger brother, Michael, grew up eventing.  Carrie evented through the Intermediate level, and both she and Michael competed at the first event at the KY Horse Park in 1977, The Junior National Championships (our nowaday Young Riders).  Carrie is the only one that stuck with the horses, and she went on to train one of her parents’ homebreds, Rhymer, and sell him on to Sherry Hill of Canada, who took him on to the Advanced level.  She also trained Hurry Home Hillary to jump and was ready to take her to her first Combined Test before her parents kindly asked for her back to breed!  It is a good thing they did, as she went on to produce some amazing racehorses. 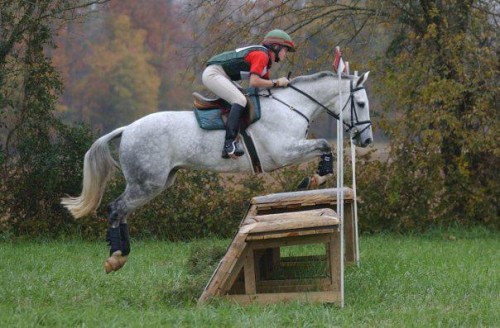 In 1987, Jeff and Carrie Irwin continued the line of horse lovers in the family with the birth of Hillary.  Hillary had the bug even before she could talk.  They had her on a horse at 6 months of age, and she cried as soon as they took her off.  She began her official riding at age 2 on her trusty pony, Toby.  She participated in pony club through age 18, and eventing was her passion.  She had many mounts through the years, with Fanny being one of her favorites.  When Fanny retired, she went to Snooty Fox Farm to babysit the foals and live the good life in Florida. 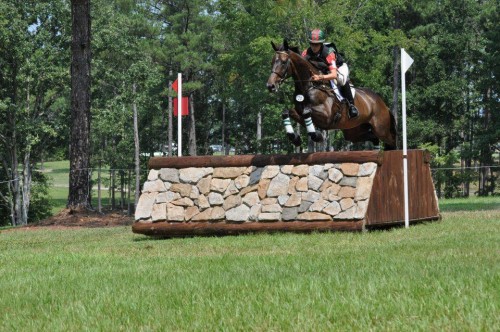 Hillary and Clifden at 5 Points in the Intermediate. Photo by High Time Photography

When Hillary was 16, she received her first Cotter bred horse, Clifden.  Clif, or fondly known as Handsome, was a 3 year old who had a mild tendon injury and did not fair well as a racehorse.  He is a big boned, handsome horse with lovely movement and jump and a great work ethic.  However, it took Hillary a few years to really “get” him.  Clif wasn’t always easy, but she kept working hard and putting in the time.  When things didn’t go exactly as planned, rather than blaming him, she looked for another way to work through the problem.  Her work paid off, and by the time Clif went Prelim, he was raking in top placings left and right.  He won at Full Gallop, Loudon, Pine Top, and Lumber River, just to name a few.  He went on to place 6th in the Long Format CCI* at Hagyard in the fall of 2009.  He definitely would have made an amazing long format horse.  Clif then went on to move up to Intermediate and have a few ups and a few downs.  However, Hillary stuck with him, and finally had that weekend where everything just felt great.  Last fall at 5 Points, Hillary and Clif finished 6th in the Intermediate.  Unfortunately, not long after that, Clif had a major injury to his suspensory.  Hillary has chosen to retire him to the lower levels, and he will soon be out and about with Hillary’s mom, Carrie! 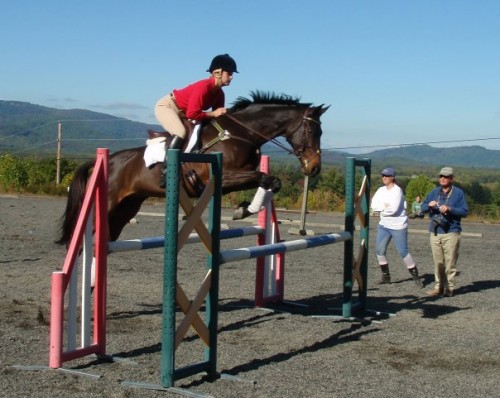 Tess and Hillary in a Jimmy Wofford Clinic. Photo by Carrie Irwin

In 2000, Carrie decided that she wanted to breed an event horse for herself.  Her parents decided to let her use one of their mares, Brandon’s Ride,(thus making the foal a half sister to Toby’s Corner) and breed her to the amazing Aberjack.  The result was a gorgeous, sassy filly, Vitesse.  Unfortunately for Carrie, Hillary took an immediate liking to Tess when she started under saddle and ended up acquiring the ride for herself.  Tess is a lovely, purely feminine creature.  She is the epitome of princess, but as Jimmy Wofford once commented about her, “When you can jump like that, you’re allowed to be a princess.”  Hillary and Tess moved up the levels together and made it to the Preliminary level.  They were 6th in the CCI* at Virginia in 2010.  However, an issue with a torn suspensory has plagued Tess ever since, and she has been retired from competition for now, but they are planning to breed her to Royal Alyance, an Oldenburg stallion owned by Wits End Eventing, LLC. 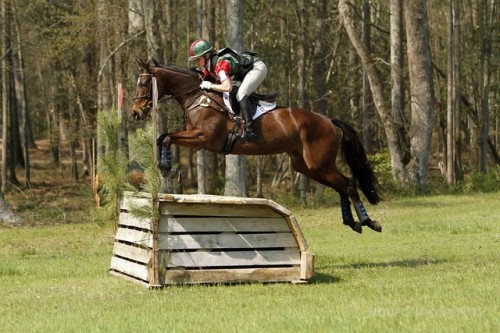 Hillary’s current Cotter homebred eventer, Bit of Irish (registered as Drop of the Irish) is showing some amazing promise of her own.  At only 5, she has really taken to eventing like a duck to water.  The Cotters did not race Irish, as they did not think she would be a great runner, however, she definitely has springs in her feet.  She has been doing very well at the Training level this year, and Hillary plans to move her up to Prelim this fall, if all keeps going well.  This mare has an ego the size of North Carolina, but she has the same sized jump!  Everyone is very excited to watch the progress of these two together.  They make an amazing team. 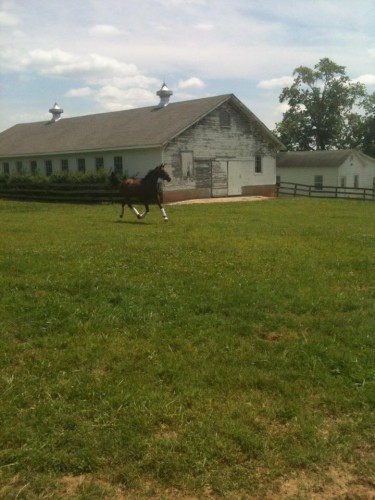 Newly arrived from Snooty Fox Farm, Kilbeggan is Hillary’s newest addition.  Killbegan is only three, so he has been turned out to enjoy life in the field for a few months before he starts eventing boot camp.  He is a gorgeous boy with lovely movement, so Hillary is pretty excited about this addition. 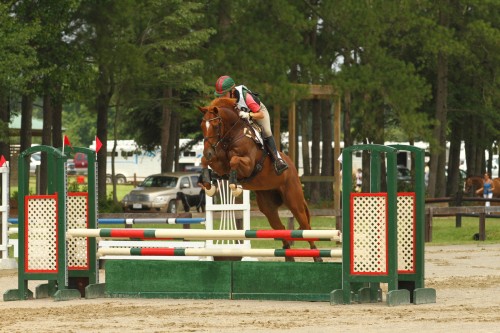 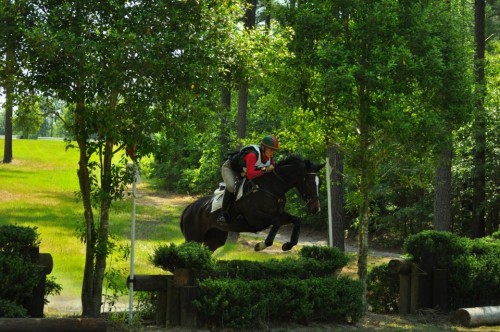 Pray for You and Hillary. Photo by High Time Photography

Hillary rode with David O’Brien for years.  She has also worked for Charlie Plumb and, most recently, she rode and groomed for Sharon White.  She has also ridden with Bobby Costello, Jim Kofford, Jimmy Wofford, Linda Zang, and is now riding with Bonnie Mosser.  Hillary has started her own business, Hillary Irwin Eventing, and she also takes on other OTTB projects from other sources.  One of her current projects, Danehill Sunset (imported from Ireland), came from Graham Motion and Herringswell Stables.  She also has another awesome OTTB star, Pray For You, who has been cleaning up at the BN and N levels.  She does an amazing job retraining these horses, as well as teaching lessons and bringing along young horses for others.  Check out her website and keep tabs on her at her blog.  Look for her out on XC, as she has adopted her grandparents’ colors of red and green. 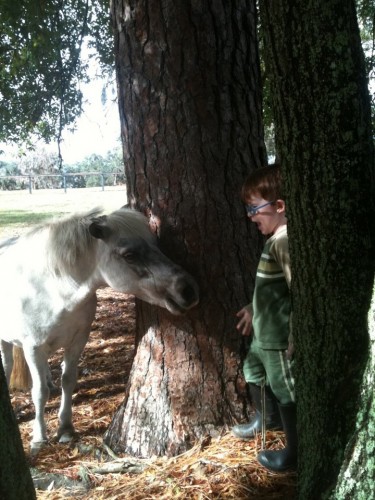 Look out for this rising star, Jack Cotter, and his super pony, Annabelle

There are a lot of families that are touched with horse fever.  I believe this family is one of the greats, as they all put their heart and soul into their horses and truly want what’s best for each and every one.  They try to place them where they will excel, whether it be racing or eventing or being sold on to a different discipline.  They truly have their horses’ best interests in mind. 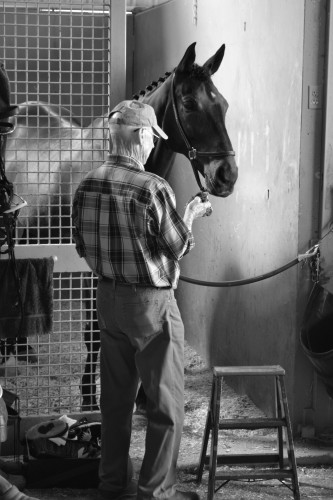 Julian having a bonding moment with Clifden.