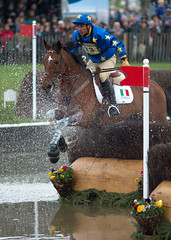 Sometimes you hear a story you need to chase down, hear first hand and then share it with the world.  This story is one of those.
I have to thank my good mate Samantha Clark for unearthing it, in her interview with Dr Chris Newton of Rood & Riddle Equine Hospital Lexington Kentucky.  Dr Newton in his video interview (see the bottom of this story for the interview) with Samantha Clark talked about Italian horse Iman du Golfe (ridden by Juan Carlos Garcia) who was seriously injured on cross country at WEG in Lexington following a collision with part of the dressing of the Apex fence 20.
The horse Iman du Golfe has since made a full recovery as reported by Eventing Nation and has returned home to Italy, hopefully we will see him once again on the world stage or at least out Eventing once again.
How Iman du Golfe is still with us is the story I would like to tell.

Having worked their way round the course as the day progressed they were looking forward to seeing Sam Griffiths and Happy Times come past soon (Sam was the rider in front of Juan & Iman du Golfe).  They heard that something had gone wrong for Sam Griffiths, so they started heading back to where they had heard that both Sam and Happy Times had fallen, uncertain of their condition.

Their trek back was interrupted by an approaching horse so they waited behind the tape for the crossing marshall to let them through.

Iman du Golfe bowled into the side of the dressing on the top of the apex fence, ejecting Juan and having a big fall himself.  Iman got up and trotted off towards the Aussie girls, whilst everyone rushed to the aid of Juan.  Moments later as he turned towards them they saw he was in trouble, Groom Krysten Lituri, was shocked into action as those around her stood in awe of the drama unfolding before them.

Yelling she needed something to pack the wound, she was thrown Janine Dwyer’s Australian Team Vest, Krysten ran straight up to Iman, and stuffed the vest into his gaping wound, and litterally put her weight behind it as compression to try and stem the arterial blood flow.  When I spoke to Krysten she still sees things in a mixture of slow motion and high speed, almost gaps in time.

Krysten, herself a FEI Dressage Rider, had started a Veterinary course at Uni, (she wasn’t afraid of blood) and later switched to teaching as her passion for riding developed, she didn’t want to immerse herself in horses as both a vet and rider, some of us need a little balance, I get that.  Her reactions and quick thinking most likely saved the life of Iman du Golfe.

The next thing Krysten remembers is an army of vets and others surrounding her and the horse, white screens going up and she was now embroiled in a battle to save the life of the Italian horse. A number of times she remembers as the team worked around her if they wanted her out, “no stay where you are, keep doing what you’re doing” was the response.  So as they splinted his foreleg, suspecting a fracture, and wrapped the wound, Krysten was amongst it all maintaining pressure on the wound.

So the Aussie Team Vest ended up literally packed inside the torn open chest of the horse, layers of further packing and bandages covered it all as the horse was carried in a sling by the team of vets, officials and the young Aussie Groom. He was loaded on the truck and whisked off across the road from the Horse Park to the surgery of Rood & Riddle with Dr Newton and his team working to save his life.

Krysten and the others left behind were covered in blood and kept behind the screens as they were washed off, and the track covered in sand to mask the blood soaked ground, after a good scrub she ended up back with her team-mates.

Then it dawned on them that the Australian Team car keys were in a pocket of the vest, which was now packed inside the Italian horse on its way to surgery.  Pretty funny really, especially given the gravity of what had just happened.  So now the team had a new task make it the long way from XC to the Rood & Riddle surgery and somehow get the keys back.

Well, as we know the story has a happy ending and Iman du Golfe is now fully recovered in Italy, the keys were eventually located and now there is a very proud new owner of an Aussie Team vest at Rood & Riddle. Krysten mentioned to me she is hoping to go overseas and learn more about her craft (Dressage) I suspect she would be treated like royalty in Italy.  I know she has an open invitation from a Senior Italian Federation Official to visit Rome and a personal guide on her visit.

This is a beautiful story with a fantastic ending and one very cool headed young lady to have around in a crisis.  Thank you Krysten for sharing your story.

Here is the interview with Dr Chris Newton, thanks to Samantha Clark for unearthing this great story.
Yours in Eventing,
Only two weeks ’til I leave to come and see you all at Red Hills, looking forward to it.
ESJ
0 0 votes
Article Rating
Subscribe
Login
Please login to comment
0 Comments
Inline Feedbacks
View all comments
More Insanity on Horse Nation >>