I write this story as sort of a bittersweet ending to a wonderful career. Although it has been unofficial for some time that I am retiring Affair from eventing, this is the official declaration of her retirement. This story is my tribute to all that she has done for me, from introducing me to eventing, to putting up with each other’s green mistakes while we learn the ropes, to our final season where we placed in the top three in all five events. Do you have a "Horse of a Different Color" to spotlight? Tip EN at [email protected] 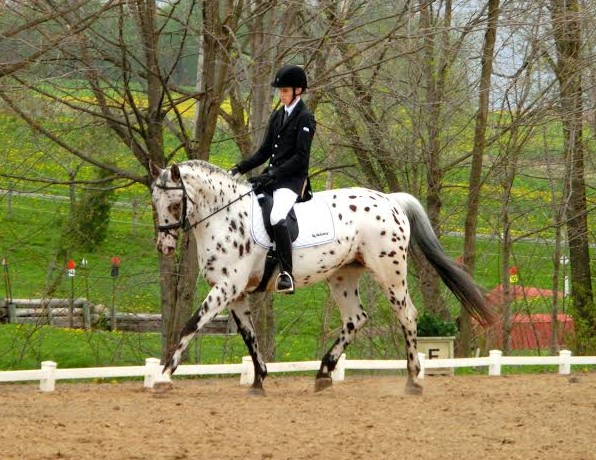 Meet Elmegaardens Affair, “Affair”, a 12-year-old Knabstrupper Mare. Yes, you read that right, the keyboard did not go on the fritz. A Knabstrupper is a Warmblood breed originating from Denmark, numbering only about 1,500 in the world.

They are an extremely intelligent breed, used in dressage, show-jumping, and of course, the circus. They are known for their spotted coat genetics, very similar to the Appaloosa. However, Knabstruppers are not related to the Appaloosa. They merely contain the same genetic variation in their color that causes the differences in coat.

Not only is she wildly colorful, but she is actually quad-colored! She is white, has both black and brown spots, as well as one tiny fingerprint-sized buckskin colored spot inside one of the regular spots. She also has a spot in the shape of a heart on her hip, as well as an arrangement of spots on the side/underside of her barrel that is also in the shape of a heart.

Affair is anything but a “pony”. She stands at 17 hands tall and weighs in right around 1375 lbs. Affair has evented through recognized Novice Level with me (and one unrecognized Training level). She was my first horse, buying her what seems like forever ago, but was only about five years ago.

Affair was born in Denmark, then sold to Scotland shortly after. She spent several years out in a field being a horse until a breeder here in America bought her to start breeding Knabstruppers. Affair was impregnated over in Scotland, and then once she received the green light to travel, was shipped over here to the U.S.

In the intervening weeks, Affair lost the baby (while it was still just a clump of cells). Since it was now later in the breeding season and Affair had not done anything performance-wise, the breeder decided to ship her up to my barn to start her training under saddle until the following year.

I eventually fell in love with her and my parents ended up buying her as my first horse when I was 16. Looking back, it may not have been the smartest idea, seeing as how both of us had barely started jumping, but with Affair’s forgiving personality, the “green on green makes black and blue” cliché didn’t happen. 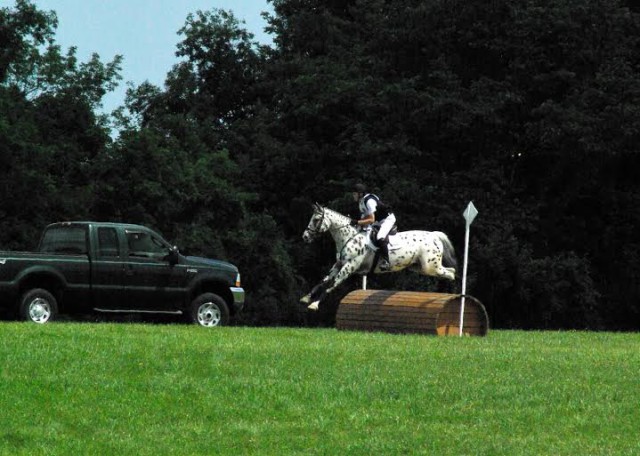 After buying her, I combined my passions for dressage and jumping into the only logical choice: eventing! We went to two shows in 2011 to get our feet wet, and then proceeded to have regular show seasons in the years afterward.

Dressage is my most natural phase and combined with her obedience and workmanlike behavior, we generally did well in it. However, the first two seasons (2012 and 2013) were very hit or miss. We’d have great dressage scores, but were still learning to be brave out on cross country and sharp with our feet in show-jumping. So almost every show we’d have a rail down or a refusal out on cross country.

The latter half of 2013 was our breakout season, before a minor injury set us back. Starting up again in 2014, we continued our success all the way through Novice level, including an unrecognized Training level event. Unfortunately, we had a major setback with another tendon injury at the end of 2014.

Affair took almost 13 months to come back from that, not starting back into full flat work until this past November. The decision to retire her was very difficult for me. Not because I can’t let go of her eventing, but because she absolutely loves jumping. Anyone who has seen her jumping knows that she has a certain pep in her step and twinkle in her eye when she starts jumping. Her ears are always pricked forward, looking for the next thing to fly over.

However, as the ancient Roman philosopher Seneca wrote, “Every new beginning comes from some other beginning’s end.” While we may not be adding the splash of color to the eventing world anymore, I have started to look into making our new splash in the “Dressage – Dressage” world.

Working around my eventing schedule with my other horse, Cayenne, I want to try to make it out to some Dressage competitions this summer at 1st, 2nd, and 3rd levels to earn our Bronze Medal. So watch out dressage world! There’s an eventer coming to take over and dizzy you with her spots (and movement!)