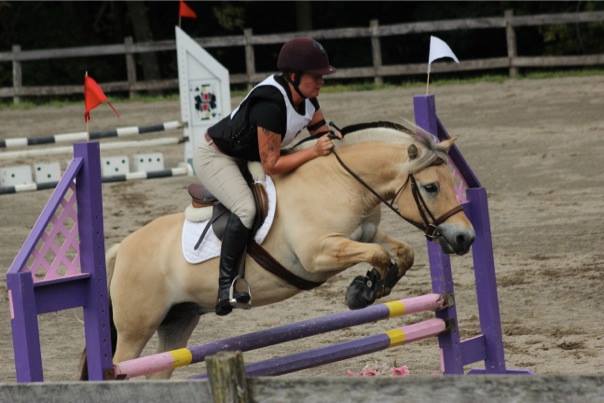 Standing just shy of 13.2 hands high (not including his traditionally-cut, yet totally rocking, mane), KO Aiken is an adorable Norwegian Fjord whose charming personality and love of jumping make him a definite “horse of a different color” in eventing.

Not only has he made a smashing debut in the three phases, having won the entire Starter division at Burgundy Hollow Horse Trials in September, but owner Kathleen Haak says that the 10-year-old gelding’s experience has run the gamut from pony rides to carriage driving, and everything in between.

“Aiken was primarily a driving horse,” Kathleen explains. “During a free-lunging workout, Aiken randomly jumped a small jump that was set up in the middle of the arena – twice.  It was then that we discovered that he loves to jump.

“Since then, we have been slowly bringing him along until this summer when he went to trainer Stephanie Kleinbauer. He has taken to jumping like a duck to water and is putting to his driving training to good use in dressage.

“His steady gaits and dependable attitude in the ring help him shine during dressage and stadium jumping, but Aiken’s favorite phase is cross-country. “He enjoys the different types of jumps found on course. Aiken’s whole body just perks up and focuses on those jumps. He enjoys it so much.” 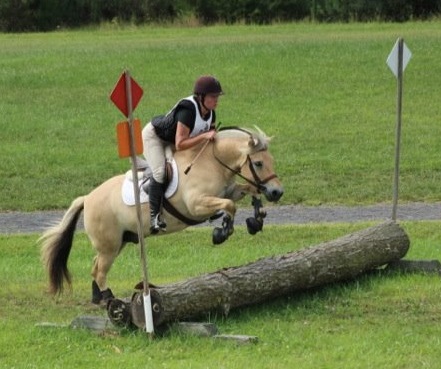 “Aiken has tried mounted shooting, mounted archery, polo, broom polo, trail, hunter paces, ride/drive events, and has even skidded a log or two at the Fjord show. Fjords as a breed should demonstrate excellence in riding, driving and agricultural work, and Aiken does. He’s even been to the local mall for Ag Days.”

He is also the go-to for carriage and sleigh rides for first-timers, and has put smiles on the faces of children going through tough times. Is there anything this charming boy can’t do? Apparently not!

As fate would have it, Aiken is currently for sale; anyone looking for a do-it-all large pony is encouraged to check out his ad on Sport Horse Nation. “Aiken would love to be at a barn that has a lot of activity (and food!),” says Kathleen. “He enjoys not only doing a variety of activities, but also watching others. Aiken also likes kids, which is great because they love him!”

Watch Aiken demonstrate the Fjord’s willing, people-oriented personality in the following video. It’s no wonder that he’s taken to the versatile sport of eventing.

Update from Kathleen Haak on December 14, 2014: “Aiken has gone on to a new home – in Texas of all places!  They don’t have many Fjords down there. 🙂  In addition to doing some jumping, he’ll be the primary mount for a little four year old girl.  They do some vaulting and therapy riding, too.” Congratulations to Aiken’s new owners!