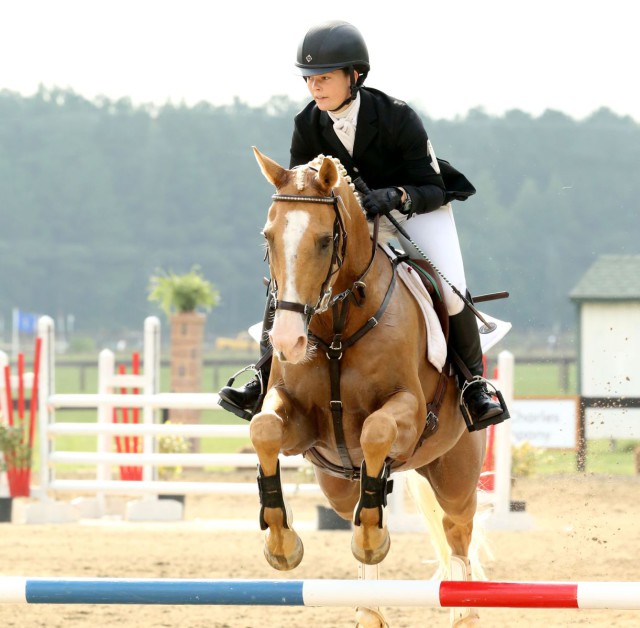 From his golden coat to his larger-than-life personality, Pegasus Pure Gold seems to take his Horse of a Different Color status to heart. A 14-year-old eventing veteran, “Cosmo” is one of a small number of palomino Thoroughbreds, with bloodlines going back to Milkie, the first Jockey Club-registered palomino.

Cosmo was bred and trained by Anne Kaufman, who also competed him through Preliminary level while he sired a number of athletic offspring at Pegasus Farm. In 2011, he was gelded and began his career as a full-time riding and competition horse.

When Tesla Parker spotted Cosmo’s sale ad, she had just sold her OTTB to a young rider and was mainly focused on completing grad school.

“It’s hard not to look when you don’t have one of your own anymore,” Tesla said. “I wasn’t actively looking to buy a horse.”

All of  her best laid plans were thrown out the window when she traveled to West Virginia and jumped Cosmo for the first time. He was the exact type of ride she wanted. Though Cosmo’s color wasn’t initially a selling point for Tesla, “all the pieces just kept falling into place” and she soon found herself with a flashy golden cross-country machine.

“He’s quite talented in dressage and show jumping and could probably do either as a career successfully, but cross-country is where he really shines,” Tesla said. “I joke at home that he works too hard, but out cross-country it comes through as all heart.”

While channeling Cosmo’s forward-thinking energy can be a challenge, Tesla trusts his quick-footed self-preservation to keep them safe when things get hairy.

“He doesn’t often take over complete control unless he really needs to save my butt,” Tesla joked. “He’s such a good teammate that way.” 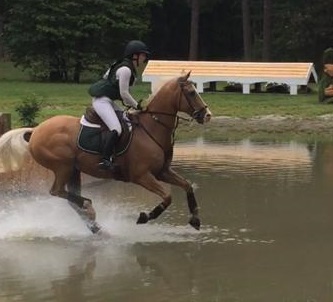 Tesla says that the biggest challenge of owning a horse that stands out from the crowd is that Cosmo gets lots of attention during their warm-up.

“It can be a bit disconcerting,” she said. “I’m not used to being able to tell that I’m being watched by more than my coach! I guess in a weird way, it’s a good way to learn how to really handle pressure. A huge benefit from his color is that my coach, friends, and family can keep track of us through the whole course, even in the woods. Cosmo’s tail is a brilliant white flag behind us!”

Cosmo’s resume is highlighted with many milestones, including qualifying for the Young Event Horse Championships during his 4th and 5th years, and Anne rode him at the American Eventing Championships a total of six times.

He has also dabbled in hunters, jumpers, and 1st level dressage. Since buying him in July, Tesla and Cosmo have completed all of their 2015 events without accruing any cross-country jumping penalties. They are currently training at the CIC1* level and Tesla hopes to move up to Intermediate and Advanced with Cosmo someday.

“We’ll see how far Cosmo is willing to go,” Tesla said. “I have a spectacular team to help keep him in tiptop condition, but when he says he’s done he’ll have a happy retirement with me.” 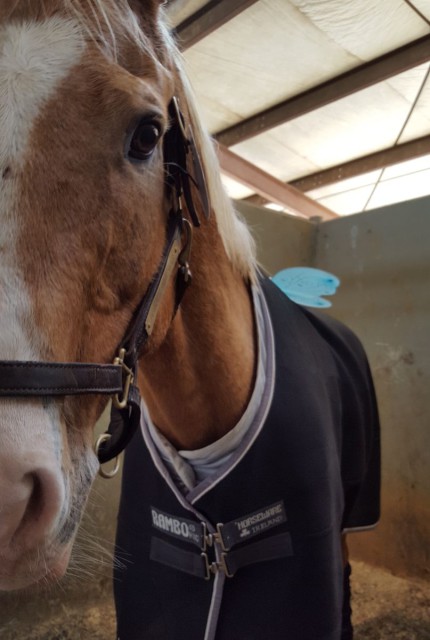 Is it a Pegasus, or a Thoroughbred with fairy wings? Cosmo celebrated his namesake on Halloween. Courtesy of Tesla Parker.

We wish Tesla and Cosmo all the best as they tackle the 2016 season and beyond! Go Eventing.