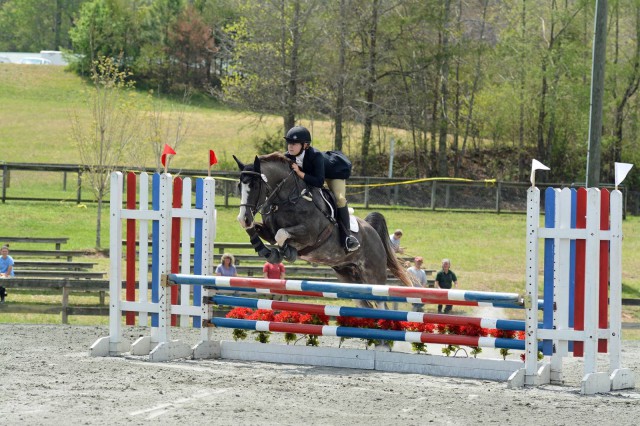 When Lisa Murray acquired Repeat the Beat, a double-registered Tennessee Walking Horse and Spotted Saddle Horse, from a breeder in Michigan, she was at a loss about what to do with the hot-headed 2-year-old gelding. But as often happens, life rolled out a very unique plan for the pair, and “Pete” found his calling in a place you don’t find many Tennessee Walking Horses: the eventing and hunter/jumper arenas.

Now, at the ripe age of 17, Pete has broken down breed barriers and changed lives along the way — so much so that he is receiving one of the equestrian industry’s greatest honors. Pete, along with select other horses, will be celebrated at Breyerfest 2017 at the Kentucky Horse Park in July and will line the shelves of tack stores as a Breyer model.

Pete has broken the mold associated with the Tennessee Walking Horse, and Lisa aims to continue doing what makes him happy as long as his heart desires: jump. 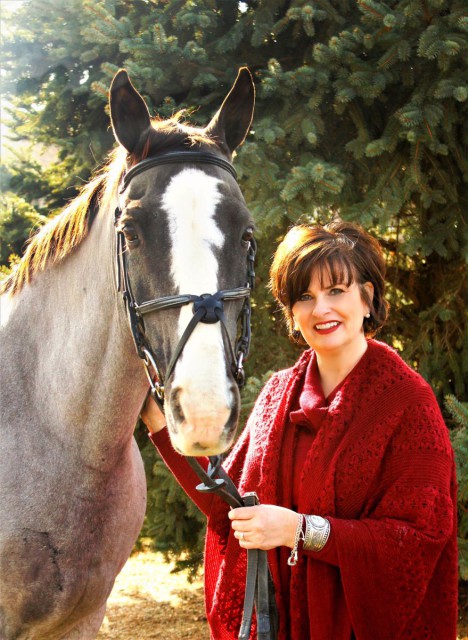 Different from Day One

Lisa grew up riding in field trials and competing in the show horse industry and has always loved the Tennessee Walking Horse. She heard about Pete through mutual friends, Dr. Harv and Brenda Carlon who bred him (by Pushers Repeat out of My Sophisticated Lady) with the intentions of having a winner in the breed show performance classes. However, the Carlons’ trainer informed them that the horse just wasn’t cut out it.

Pete’s final show ring performance was at the Spotted Saddle Horse World Championships late in the fall where he was crowned Two-Year-Old World Champion. Weeks later, he was on his way to a new life, leased to Lisa Murray and her daughter Jeren, who had plans to trail ride him.

Pete quickly gained the nickname of “Unpredictable Pete” at Lisa’s home. He hated being alone on the trail and was extremely tense. Though he trotted when at liberty, he paced when under saddle.

While some friends from Germany were visiting Lisa they decided to take a trail ride on her 20-acre property. Lisa stayed home to tidy up and when her friends returned a while later, she was happy to see they were all smiles and giggling.

“Pete, we like him! He jumps so nice,” one of her friends told her. Lisa was stunned and questioned which horse they were on, but they kept saying it was “the gray horse, Pete.” She was sure they mistook Pete for her gray Arabian in the field, who had been a former jumper, but they were insistent that it was Pete the Tennessee Walking Horse.

To prove to her their point, they set up a little course in her field and took Pete through in English tack and a plain snaffle bit (Pete had always been ridden in a curb bit). As soon as she saw how happy and relaxed he was going through the course, she knew what she needed to do. 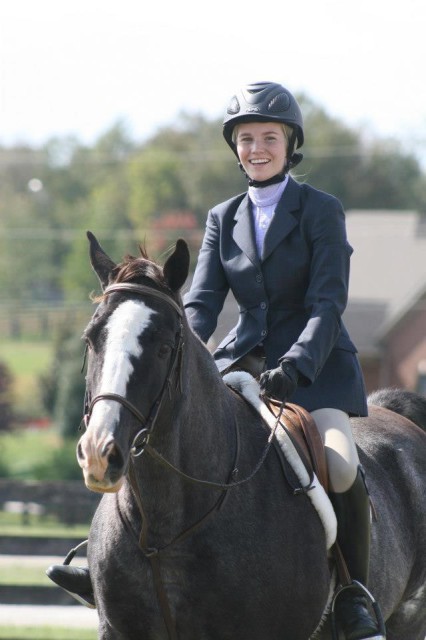 One day, while driving around, she came across a barn called Runaway Stables and thought to herself, “if anyone could help me, it had to be a barn with a name like this.” To her surprise, the barn owner told her of a young rider by the name of Sarah Mack Clark who “would ride anything” and could probably be of help to her.

Lisa and Sarah became quick friends as Pete progressed in his training. It was decided that Pete would venture into the jumper ring and begin a whole new training regime. Once the Carlons realized Pete had found his place and a lifetime home, they gifted the horse to Lisa.

Pete quickly became popular among young riders, and Lisa had several catch riders on a growing list to would help her show him. While at a horse show in Murfreesboro, Tennessee, a young rider by the name of Mawghan McCabe decided to show him in the hunters, just for fun.

To everyone’s surprise, he won.

Lisa and Mawghan were ecstatic, until the judge made an announcement requesting Mawghan come to the judge’s stand. He requested that Mawghan demonstrate a running walk for the spectators to prove the versatility of the Tennessee Walking Horse breed.

It was at that show that Lisa met Heidi Rockhold and her daughter Victoria Bennett (now Gomez). Heidi had also previously shown performance Tennessee Walking horses and wanted to compliment Lisa on Pete, while Victoria requested the opportunity to ride him.

Victoria had great success with Pete in both the hunter and jumper rings. They won the Hunter’s Court Circuit Grand Champion title and were consistent winners in the 3’3” Adult/Junior Equitation division. Pete and Victoria were also winners over fences and on a whim, Victoria decided to go back in for the flat class. Once again, the pair won.

In 2006, simultaneous to the Tennessee Walking Horse National Celebration taking place in Shelbyville, Pete was being ridden by Rebecca “Becca” Hoos at a show at Brownland Farm. It was decided that Becca would enter the jumpers so all she would have to do was walk and canter to avoid any pacing.

Lisa recalled that the course was quite difficult for a .85-meter class and that several eventers were there to school the show jumping in preparation for an upcoming competition. As Pete went into the arena, Lisa overhead a conversation from a few women on the rail who were not aware that she was his owner.

“One woman said, ‘I don’t know what that horse is,’ and the other responded kind of catty, ‘I heard it was a Tennessee Walker,’” Lisa recalled with a sigh.

“I just looked at her and as calmly as I could I said, ‘Yes, he is a Tennessee Walker. I’m not here to prove anything; I just want to know that he can do this. I want him to be happy. There are horses at the National Celebration right now doing a high-stepping gait and I promised this horse that he would never have to live that life again.’”

The woman at the rail actually teared up and replied, “I never thought of it that way.” As if to prove Lisa’s point, Pete came in second place in his jumper class that day out of a hefty division of competitors. 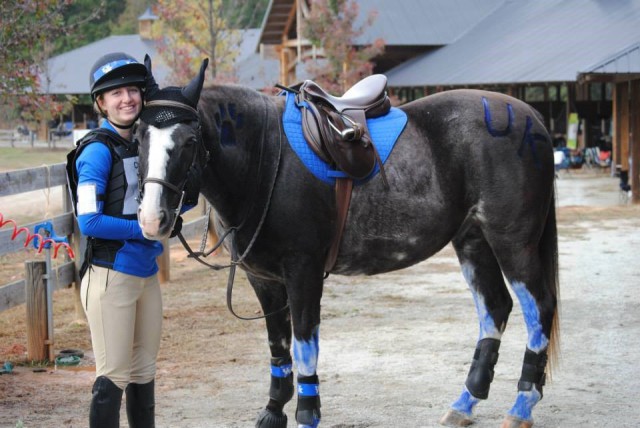 Rachel Norton and Pete during his time with the UK Eventing Team. Photo provided by Rachel Norton.

It’s All About the Horse

Pete is also a familiar face in the Kentucky eventing scene, and Ashley Jones and Rachel Norton have both competed him for the University of Kentucky eventing team. He has competed regularly at both FENCE Horse Trials and Chattahoochee Hills and can often be spotted at local hunter paces.

In all his years of showing, Pete has gone clean at every licensed eventing or jumping competition he has entered. Despite original concerns that Pete wouldn’t be able to hold his own in eventing due to the gait requirements of the dressage tests, he makes it work — and makes up for what he lacks in cross country and stadium jumping.

“Just look at what these horses are capable of,” Lisa says, pride in her voice. “They don’t have to be padded. They don’t have to wear chains. They can do so much more. Everyone thinks they can’t, but they can.”

In Lisa’s estimation, jumping made Pete confident and erased his unpredictable behavior. Nothing phases him now, and he tries his heart out. When the the trailer pulls up to a trail, he is calm and peaceful, but the moment he sees jumps in the distance he is alert and pawing at the ground, ready to go.

“I have told everyone who has ridden him, ‘Don’t ride him if you’re ashamed of him,’” Lisa said. “They ride him because they love him and because he loves his job. My granddaughters both ride him and he is great for them. And then you can take him into the ring and he can perform.

“In his younger years, this horse was jumping up to 4 feet. He was doing everything he wasn’t supposed to do. And now in addition to jumping, I can take him into a Cowboy Challenge and walk across teeter totters and drag Christmas trees.”

The combination of Pete’s success and his unconventional breed for his chosen disciplines had several of his top supporters encouraging Lisa to reach out to Breyer about him. On a whim, she wrote to the company and told Pete’s story. Her expectations weren’t high, knowing countless deserving horses apply every year, but when she got the phone call that he was to be considered she was ecstatic. 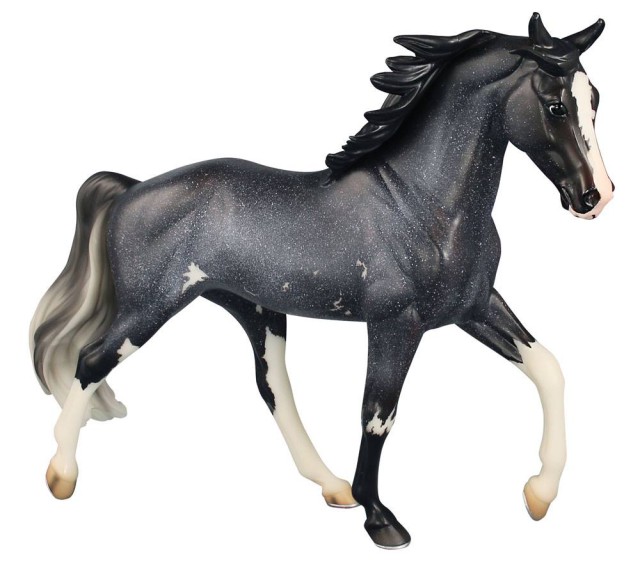 She contacted all of Pete’s former riders to let them know, and three of his former riders — Chelsea Kolman, Victoria Gomez and Ashley Jones — will be performing demonstrations on him during the 2017 Breyerfest. All of his former riders but one will be able to attend to support the horse that gave them so much and celebrate this monumental honor.

“If we can just change one person’s mind about this breed, we made a difference,” Lisa said. She always wanted to do whatever made Pete happy — the special recognition of the breed just came with the package.

It has been an exciting and life-changing ride with Pete, and Lisa wouldn’t want it any other way. From thinking, “can this horse actually do this?” to watching him bring home ribbon after ribbon, Lisa has always been Pete’s number-one fan. Congratulations to Lisa and Pete on this most deserved honor!