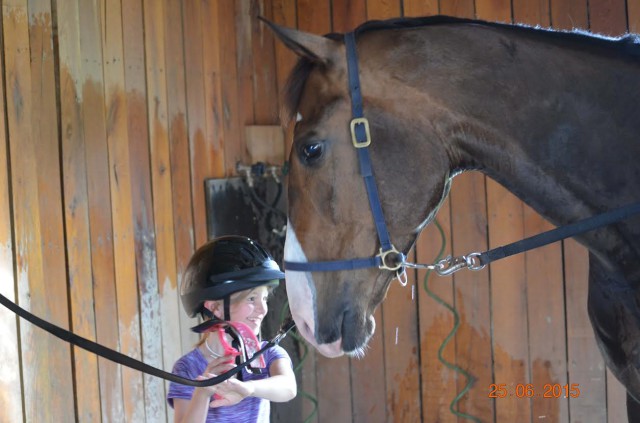 Once upon a time … oh, no, wait. This is a real story so maybe it should start something like, “One fine day in August, 2014 … an 8-year-old little girl who had never really ridden a horse before waved shyly at a rider warming up for cross-country at the Richland Horse Park.

The young lady rider waved back, stopped her horse, walked over to the fence and said, “Would you like to pet him?” And that was it — hook, line and sinker. The child rubbed the horse’s muzzle and then stood in awe, rooted to the spot, watching the entire warm-up until the rider and horse crossed the walking path to the start line. The clock started counting down: “5, 4…” — and the rider looks over her shoulder at the little girl and waves — “2, 1…” and they’re off!

Whoa. No, not whoa as in stop the horse but, whoa-a as in: WHOA, amazing.

You see, I am the little girl’s mother. That day I saw a look on my daughter’s face that every parent longs (and dreads!) to see: the look of awe, love, fascination and curiosity all rolled into one. The look that tells you they have just taken the fall. At that moment, as she watched the horse and rider warm up, a thought flitted through my mind of, “Hmm, I wonder if this will be anything in a year’s time…”

Well, it is almost one year later and we have our very first horse show tomorrow.

Who is this young lady rider who stopped in the middle of her warm up time to say hi to a little girl? Her name is Lauren Ferguson. She is an amazing CIC3* rider and a phenomenally outstanding trainer living near Louisville, KY. The horse? Well, now, that is a bit of a story in itself.

You see his name is Landretti and he is owned by Greg Tryon. Lauren worked and trained alongside Amy Tryon for several years and after Amy passed away, Landretti went to Kentucky with Lauren to be under her training and showmanship. Landretti, also known as Leroi, is very special to Lauren as he is a link to the heartfelt friendship between Lauren and Amy. 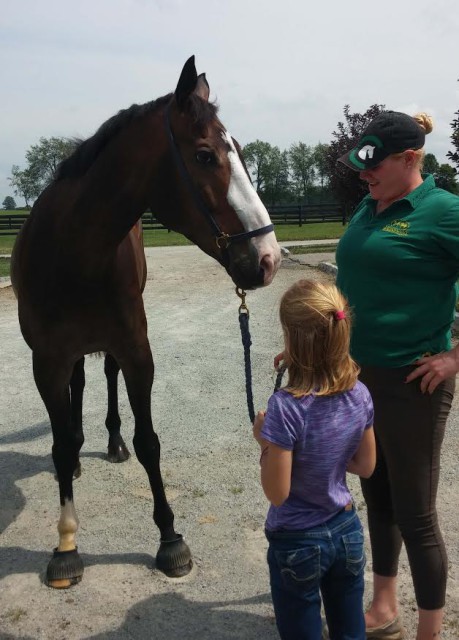 For me, Leroi is special because he was the link for my daughter Alexiea to meet Lauren who is one of the most wonderful, generous people I have ever had the chance to meet. After we arrived home that fateful day in August, 2014, I wrote Lauren an email thanking her for her five minutes of attention towards my daughter.

Lauren read the email that evening, on the side of the road after a blow-out on her way back to KY. Read the events of that day from Lauren’s side on her blog and you will know why I stress what a wonderful person she is.

Oh, and there is more!

Alexiea has been riding almost every week since that day in August 2014. When it was too cold to ride in Jan and Feb (Michigan winters can be a bit harsh), she mucked stalls, cleaned arenas and groomed horses… in an unheated barn.

This summer, Lauren invited us down to Safe Harbour to spend a weekend with her and Leroi as a surprise to my daughter for her 9th birthday in June! With it being in the midst of such a busy season for her students, it was an amazingly gracious offer, and with Greg Tryon’s advice to take Lauren up on it, we did just that.

We went to Kentucky and had an absolutely amazing time. We met so many people whom just opened their lives to us. They loved meeting Alexiea, especially when Lauren introduced her as “that little girl from The Richland Horse Park who fell in love with Leroi”! A special thank you to Jackie and Robin LeMastus as well as Mr. and Mrs. Ferguson, too!

So here we are, almost one year later after that one significant day in August when Alexiea first saw the infamous Leroi and amazing Ms. Lauren and lost her heart. We head to the barn here shortly this afternoon to prep for tomorrow … for Alexiea’s very first show. 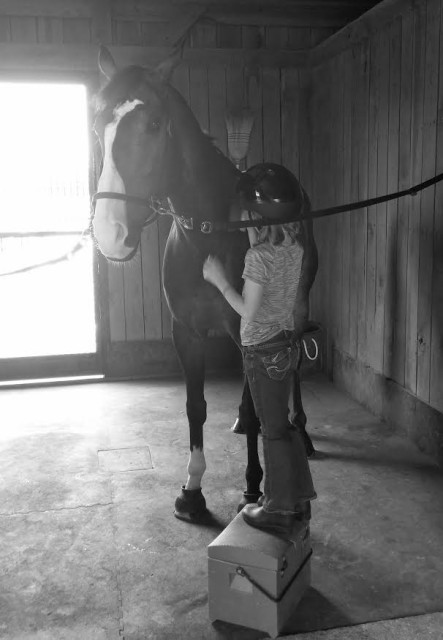 The 2015 Richland Horse Park Trials will be held on August 20-23. Lauren and Landretti will be there. And my daughter and I will be there, too, in the front row, to cheer them on, muck stalls and whatever else is needed. It will be nothing short of a blast, a true celebration with friends.

You see, folks, Lauren Ferguson is one of the most incredible people I know. I will never be able to truly put into words how I feel when I look at my daughter as she rides these days. The love Alexiea has for those magnificent (and often temperamental!  ), 4-legged animals is beyond words.

And she found it all because of Lauren Ferguson, a true gem in the horse world. As I said in my very first email to Lauren on that long ago day in August, “You took five minutes out of your day to be nice to a little girl and her brother today but that 5 minutes to this little girl was worth a lifetime. My daughter will remember you and Landretti for a very, very long time.”

Thank you, Lauren. You are truly an amazing person.