I sat down and had a chat about horses and riding with Tiffany the other day. She told me that I bred a nice horse and have really screwed her up, probably because I don’t really know anything about training horses. Also, she said I broke the last three horses I rode. You know, Cider started stopping and probably the suspensory damage was old and is really just an excuse for my bad riding causing him to lose confidence. Plus, she reminded me that I never really got anywhere with Mighty or Sassy and clearly that’s because, as she’s mentioned, I don’t know anything about training horses and I should probably just quit riding now since I don’t have enough money to buy a nicely trained horse and obviously, I can’t ride well enough to have any success with anything else.

I know what you’re thinking. I need to get rid of my friend Tiffany because she’s just mean, but I’ll bet you’re friends with her, too. You see she’s not real; she’s the voice in my head with all the negatives and doubts about what I’ve done in my life and my ability to do anything else in the future. She often reminds me that I suck as a rider and I’ve failed at training every horse I’ve ever had. While she’s at it, she keeps suggesting that I was probably a bad teacher and even though I am just a quitter, maybe the kids are better off without me anyway. And she frequently points out how bad a wife I am. The worst part about what she tells me is that there is just enough truth in what she says that I can’t totally ignore her.

I realized yesterday that this voice in my head was keeping me on the very thin edge of mental stability lately and was the reason I’ve had way too many face-crumpling, body-sagging, snot-dripping, bawling fits in recent months. Of course she tells me that she’s really the truth and it’s just hormones or my inability to face the truth that are making me cry and I should probably stop being such a baby and just deal with it. I decided today to give her a name with the hope that would help me shut her up sometimes. I knew it had to be a woman’s name because I don’t know any men who spend that long in their own heads, no less mine. Apologies to any pleasant people named Tiffany, but I’m a child of the ’80s and that just seems to me like the worst middle school mean girl name.

My Tiffany is probably one of these girls.

I do have another voice in there too and I decided today to name her Andrea in honor of two supportive and helpful Andreas in my life. Andrea Waldo’s book Brain Training for Riders is what gave me the idea and I’m currently reading it for the third time. It’s awesome; go get it. 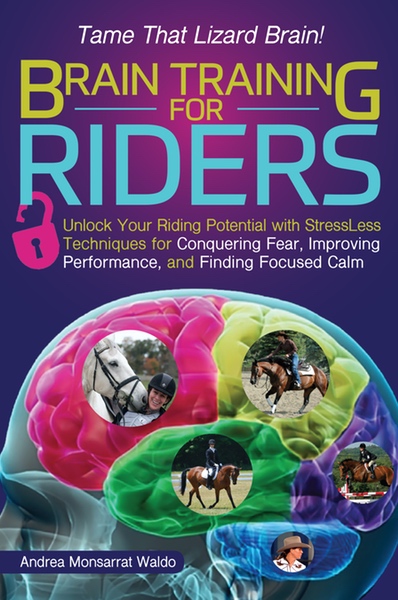 I used to think that a lot of her information on fear didn’t apply to me because I’m not really afraid of going and doing things. But turns out I’m afraid of what I’ve already done. That’s where my lizard brain spends its time.

My college roommate Andrea is one of the kindest, most supportive and positive people I’ve ever known even though she’s had well more than her share of hits from life to make a different person turn bitter and angry. I decided to hear her voice in my head counteracting Tiffany with another point of view on most things. 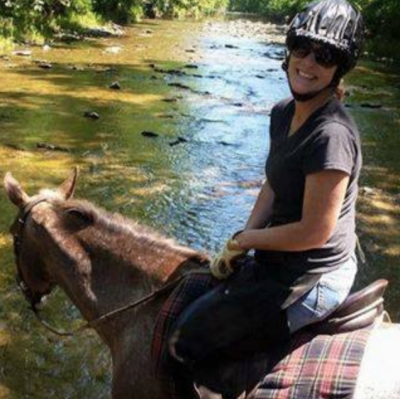 My Andrea. Photo by Connie Booth.

Andrea reminds me that almost every horse I’ve ever had has been a slightly broken soul and I’ve done more with many of them than many other people would have been able to. Neither Cider nor I had gone higher than Novice and his little 15.1-hand half-Arab self is not really what most people think of as an eventing prospect. But we had some pretty good runs at moderate Prelims and even won a few times. 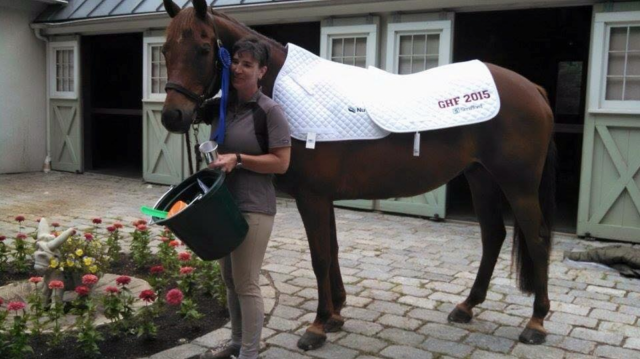 A bucketful of loot for winning the Groton House P/T division. Fun fact: Cider was 6” shorter than any other horse in the division. Tiffany says it’s not that big a deal since there were only seven horses in the division. Photo by Emily Graeser.

And it’s possible that the suspensory damage was there longer than we knew and was the reason why he started losing his A game. 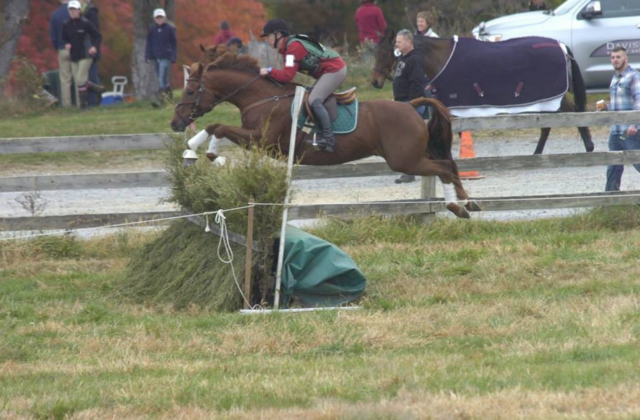 Tiffany tells me that this doesn’t make it better because it just means that I jumped a lame horse, but Andrea reminds me that he seemed game and I tried to find causes for the problems and as soon as I felt any actual lameness, I withdrew and got him examined.

Andrea points out that Sassy was a half broke, show Morgan and she really just didn’t want to jump. So I probably did right by her to send her back to people who would do what she knew instead of forcing her into my mold. Even Tiffany acknowledges that Mighty had some serious PTSD from the racetrack but she tells me that I obviously didn’t know enough about OTTBs and I shouldn’t have tried to retrain him mostly on my own. Andrea politely breaks in with the reminder that I did try to take him for lessons but there was no one nearby who was at all helpful. And Andrea reminds me that I allowed him to retire when I noticed his neurological signs and intermittent lameness and I have been making sure he is well cared for and happy for six years now and will continue to do so for the rest of his comfortable life.

Tiffany has been trying to tell me lately that even if Tik succeeds in helping Kissa understand her job more, I won’t be able to ride her. And I probably shouldn’t try to get her to event because obviously she doesn’t want to and I should just find her a show hunter home where she’d be happier. Andrea is pretty sure that no one else will be able to ride her any better and I’m giving her the best chance to learn eventing now. If it doesn’t work, I’ll go do something else with her. Those athletic avoidance maneuvers she’s been using look a lot like fancy dressage pony stuff if she’d ever consent to allowing leg and hand at the same time.

Tonight, when I go to bed and I can’t sleep for the 9,731st night in a row, I’ll to try telling Tiffany to shut up and go talk to Andrea. Tomorrow, when I experience some small frustration, that isn’t really a big deal in the scheme of things, which Tiffany tries to blow out of proportion and tell me that it’s because I’m just a crap human being, I’m going to tell her where she can put her ideas. And maybe someday soon, when my horse has had some help from someone who’s better than me, I can go back to riding her with more education of my own and we can start moving forward. And even if we have a setback, I will ask Andrea’s opinion on the matter before I let Tiffany tell me that I suck. Maybe I’ll even call my husband tomorrow and someday soon I’ll decide what to do with the rest of my life because I am really happy that I retired from teaching.