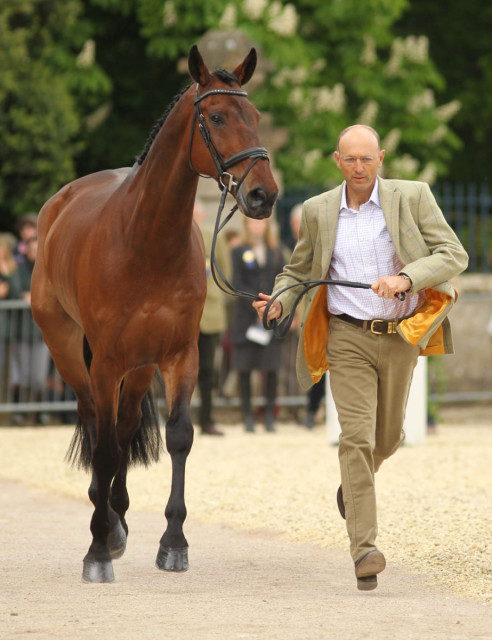 The 2nd of May 2014 dawned cool and cloudy, a chilly wind blew, but an intrepid crowd still gathered 10-deep — those at the front having arrived early with chairs, stools and thermoses — around the trot-up area in front of Badminton House.

Who was there? Eventing fans, punters … and fashion bloggers. For their fortitude they were rewarded with a largely tweedy fashion spectacle worthy of the catwalks of London or New York. In fact, rather better thanks to the fact that every ensemble sashaying down the gravel catwalk included the ultimate fashion accessory: a super-horse.

What followed was a social media frenzy of fashion commentary — a little surprising given eventers’ pragmatic affection for jeans and paddock boots. It isn’t quite like this at any other event. Why?

Possibly because there’s nothing quite like Badminton Horse Trials, held at Badminton House, the ancient stately seat of the Dukes of Beaufort. Badminton is one of only six CCI4* events in the world and is the second of the three legs of the Rolex Grand Slam of Eventing.

It’s a grand spectacle attracting crowds of up to a quarter of a million — the largest for any paid-entry sporting event in the UK and the second largest in the world. It has an impressive history, having first been declared ‘the most important horse event in Britain’ in 1949.

The grooms’ canteen is in the original great Tudor Hall; the welcome drinks party is hosted by the Duke of Beaufort, one of England’s great peers; Princess Anne and her daughter Zara Phillips have been frequent competitors. If you win, the Queen of England shakes your hand.

Perhaps it’s no wonder competitors want to look their best.

‘A real sense of occasion’

Australian Bill Levett finished 10th at Rolex last month, competed at Badminton 2014 on two horses, and is also competing this year with Shannondale Titan. He came to the UK in the early 1990s and competed at his first Badminton shortly afterward.

“There’s a real sense of occasion created by the history of Badminton,” Bill said, “and there are all those things that as a rider I read about when I was younger ‚ like the cocktail party with the Duke and the trot-up in front of Badminton House — that create the sense of stepping into another era.”

How has the trot-up changed over the past 20 years?

“For my first four-star, which was at Burghley in 1994, I wore jeans, and for many, many years I think it was only really the girls who consistently made a statement in the trot-up with their dress sense. The guys were much more subdued,” Bill said. “However over the last half a dozen years or so the guys have taken to doing so more consistently as well. It’s my personal view that it’s a nice addition to the event when people express themselves through what they wear.”

Indeed, the trot-up fashion show has increasingly captured the imagination of audiences, adding a bit of bling to traditional Badminton. Last year’s Badminton trot-up style was dominated by tweed — jackets, coats and skirts — but there was great sartorial range, with short dresses and heeled boots at one end, Ludwig Svennerstal’s tuxedo at the other, and Bill Levett’s tweed jacket with the strikingly elegant orange lining somewhere in the middle.

“I grew up in rural Australia,” Bill says, “so I’m a bit of a cowboy. My favourite ‘anchor’ clothes are Australian RM Williams products; I just feel comfortable in them. A Hume in Scotland sponsors my trot-up outfits, and they have a great range of jackets and trousers so that the only problem is there are always too many combinations of jackets, shirts and trousers to choose between. But they’re super helpful in getting me sorted in a calm manner without panic!”

Archie Hume of A Hume says, “We know our eventing customers put a huge amount into preparing for competition, getting their horses into top condition. The horses at Badminton are the premiere equine athletes in the world, and they look it. I can see why the competitors want to complete the picture by wearing something they feel great in. We’re honored to be a part of that.”

“I only get to do two to three four-stars per year, and every one is special, but Badminton is unique,” Bill says. “There’s the history and then there’s the buzz of putting myself up against the big track, of putting years of prep to the test. The way people dress for the trot up reflects that, and the surprise is part of the fun.”

‘It’s always been a spectacle’

Author Debby Sly, who wrote the definitive history of Badminton, Badminton Horse Trials: Official 50th Anniversary Celebration: The Triumphs and the Tears, spent months combing through the Badminton archive while researching her book.

“If you want a historical perspective, people have always gone to watch the trot up at Badminton; it’s always been a spectacle. There are plenty of black and white photos of people sitting on hay bales to get a better view. The trot up is a great opportunity for people to see the horses close up in the flesh, without their tack, to really appreciate these incredible horses.”

But was it always a fashion show?

Debby explains, “I think people have generally always been smartly dressed out of respect, but the number of cameras you see at the event today has encouraged people to put that much more thought into their Badminton trot-up outfits. Now you see some of the younger competitors tweeting about their outfits long before the competition — something I as a horse person would be far too superstitious to do!”

Winning Badminton is the sort of thing young pony girls dream about as they drift off to sleep, the stuff of bowed heads, pressed hands, and whispered prayers, and dressing beautifully for the trot-up has become part of that dream.

Check out EN’s photo gallery from last year’s trot up at Badminton at this link and stay tuned for our full coverage of Badminton starting Wednesday! Go Eventing.