Juli Hutchings lives in Fair Hill, Maryland, on her farm, Appleton Equestrian. She has ridden to the FEI levels of dressage and eventing and denotes much of her success to her horses. She is the author of many articles written for the Chronicle of the Horse, Sidelines Magazine and most recently EN. You can find her best-selling novel, A Horse to Remember, online or in book stores. 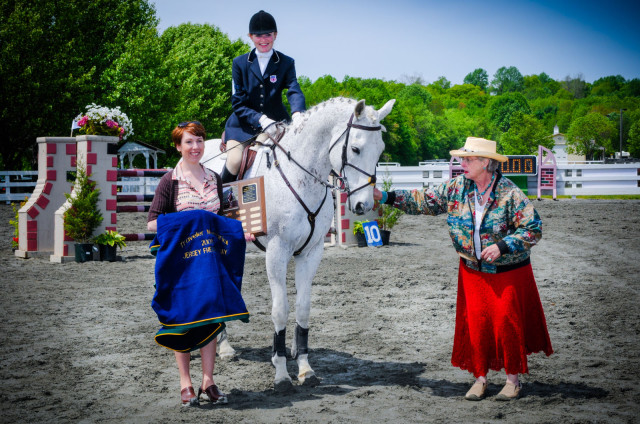 “Three, two, one — GO!” Fling went; Fling always went. No jump was too wide, narrow, tall or tainted for Fling to get to the other side. No matter the length or level of the cross country course, he always finished just like he began: his small ears pricked forward and his eyes eager with love for his sport.

When I first met Fling I was 15 years old and had competed through Training level. I met him after my older gelding fell on me during a lesson with Phillip Dutton, solidifying the fact that I needed to find a new partner.

It was thanks to Phillip and the crew at True Prospect Farm that Fling found his way to me. His owner, Gil Phillips, had left him in their hands, and over the years he’d become a seasoned one-star horse at their barn. When he came to me, he’d been off for a year due to a mysterious injury but had come back sound and needed a rider.

For months Fling drug me to the fences as though insisting he knew much better than I. I couldn’t argue most days, and I recall once we nearly careened over my mother who stood in the gymnastic line to help slow him down. I knew I had a busy winter ahead of me and filled it with lots of lessons to learn how to ride him better.

I was still in Pony Club at the time, and I’ll never forget our clinic with Scott Hassler at Hilltop Farm. Amy Jackson, a racehorse trainer and my friend, was watching our lesson and couldn’t contain her excitement when I pushed Fling into a trot. She came bounding out into the arena and flung her arms around Fling.

No one could understand what was going on until she managed to push away her tears of joy and explain that she had trained Fling as a 3-year-old at the Fair Hill Training Center and had raced his mother too. Thirteen years later, she’d known it was Fling only by the way his hind legs plaited as he walked.

After the lesson I called Fling’s owner, Gil, to tell him of the encounter with Amy. He sent me a DVD of all Fling’s races, and it was no overstatement that he was an outstanding racehorse. In nearly every race Fling led the pack from start to finish. In only one did he break badly for the gate and hug the rear only to burst to the front in time to win the race in a three-horse photo finish. The announcer’s words were, “Look out for the big gray machine coming up on the outside; I told you he was the one to watch!”

Fling’s years as a racehorse must have made him the world’s fittest horse. In my events that spring, Fling skipped around like a kid on a playground. We began calling him the Iron Horse, and without a doubt he lived up to the name.

He taught me this: Just point, kick and hold on tight. In my first season of Preliminary I was his protégée, clinging for dear life over jumps larger than us and allowing Fling to be my eyes, ears and protector.

The year after, we worked as a team and took away a ribbon at our very first one-star. I learned the hard way how ties were broken, and after dropping three spots in a tie I stopped letting Fling go his rather speedy pace on the cross country and learned to regulate his gallop to finish nearest the optimum time.

Our work paid off, and that summer we represented Area II as individuals in the 2007 North American Junior & Young Rider Championships. The coaches had decided that with Fling being 17, they were taking a chance on his soundness and couldn’t jeopardize the others in putting him on the team.

Fling proved his worth by finishing better than all the team horses, just missing the 10th place spot for the country’s best young riders. It was two pesky rails that pushed us behind the ribbons. The only downfall I could ever place on Fling was that sometimes he got lazy with his feet. That was until we tackled Intermediate.

Fling shocked us all with three clear stadium and cross county rides between the red flags. My mom knew how hard I had worked, and she and I were both nearly in tears after my first big win in the Young Rider’s Open Intermediate at Plantation Field. In an eight-horse division, Fling was the only one to leave up the rails in the show jumping and finish without time faults cross country. We had come such a long way.

In 2008, we finished two CCI2* events at Fair Hill International and Jersey Fresh. I still remember the chills at Jersey when Fling’s name was called during the awards ceremony. Alongside top horses and riders, Fling and I walked to the middle of the ring to receive the Traveler’s Memorial Trophy for the oldest off-track Thoroughbred to finish the event. At 18, it was no wonder cheers erupted in the grandstand in tribute to such a noble horse. To this day I believe Fling understood he was being recognized; he had never looked more proud.

When the end of summer hit far too quickly, Fling accompanied me to college. I couldn’t leave him behind yet and planned to return him to Amy Jackson the following year. Gil, Amy and I knew retirement as a pony horse at Fair Hill was exactly what Fling would want.

In the meantime Fling spent a happy and healthy fall and winter in South Carolina. My college friends would often visit him at Full Gallop Farm in Aiken and I’d let them take him around the fields, ride double, even pop over a few jumps with me. Laura Anderson, who owns the farm, called Fling a saint of a horse.

After a final jump school one January night, Fling was fit and ready for our in-house event the following week. The phone call at 7 a.m. the next morning put our plans to rest and with it so did my dreams.

Fling was gone. In the awful cold and rainy morning, I drove down the long sandy lane as I had so many times before, only this time, instead of grazing under the 300-year-old live oak beside the lane, Fling lay still and lifeless beneath it. He must have had a heart attack; he was unscathed and peaceful on the ground.

When a man came to take him away from me, he comforted me in saying, “He will be in good company. There are some million dollar racehorses buried where he’s going.” Through my tears I had to smile. I stroked Fling’s soft gray fur one last time and said, “That’s good because he was a million dollar horse.”

Fling taught me more about riding and the sport of eventing than any person ever could. I was so fortunate to have had him in my life and owe him everything. Thank you, Fling.