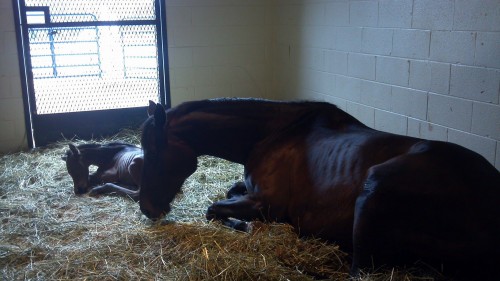 Pine Island Girl (TB), and her filly, Fuerst Fury, on day one

Many people ask me how my farm, Rocky Start Stables, got its name.  I came up with the name in my business class in college.  We had to write a business plan, and it was the name I chose.  I planned to do a lot of retraining of off the track Thoroughbreds (funny how I stuck with that plan!) and it just seemed like a fun play on words.  However, when the real world threw me into starting my own farm, it seemed even more apt.  My husband had land that had been in his family, and we had to start from the ground up.  Rocky Start just seemed to fit. 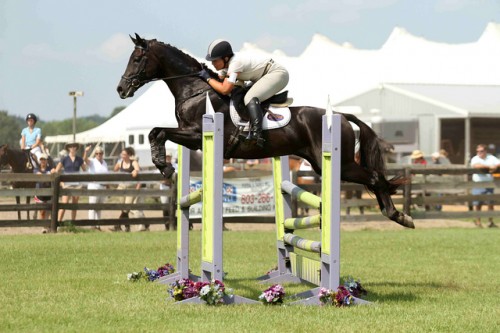 Besides riding, training, and teaching, there is a bit of breeding going on at Rocky Start.  In 2008, I was given the chance to obtain an extremely well bred 2004 Hanoverian stallion, Fuerst Rendition.  He is the only US bred son of Fuerst Heinrich, winner of the 2003 World Dressage Young Horse Championships in Germany.  Fuerst Heinrich passed away at the age of 7, so his offspring are difficult to find.  The catch to this great opportunity: The stallion was 4 years old, unbroken, and possibly unsound.  Did I really want to take the chance? 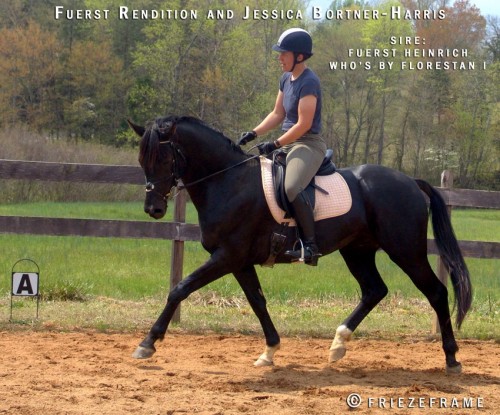 Renn and I working on our dressage. Photo by [email protected]

Fuerst Rendition, or Renn, had been stepped on by his mother.  His left hind fetlock had to be reconstructed at Virginia Tech, and he was only given a 15% chance of ever being sound.  When I met him as a 4 year old, he was a gangly boy and not much to look at.  He did, however, move beautifully.  I was concerned about taking a stallion that was unable to prove himself performance wise.  He had the bloodlines and the movement, but what if I couldn’t get him sound?  Luckily, the owners had bred 3 mares to him, and they offered me their best mare.  If I had one foal as a start, maybe I could get his name out there…slowly. 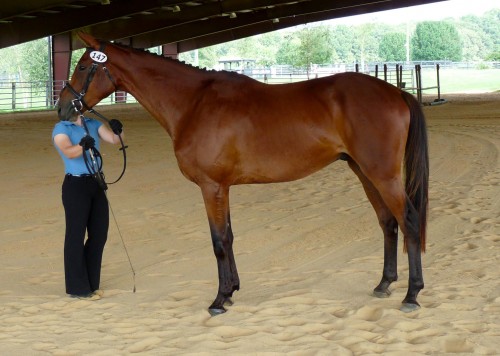 Furest Love, owned by Catherine Schumak, by Renn and out of a TB mare, winning the 3yo FEH at The Ark last fall. Photo by Jordan Armstrong.

To make a long story short, I turned Renn out on a hill for about 6 months before trying to bring him into work.  A friend and I broke him to drive first.  We had him pulling a tire and rim all over the place to try to build his hind end strength.  This seemed to be the key, as I got him going under saddle a few months later.  He has some issues with his hips being uneven, due to his hind fetlock being bigger than the other.  I just have to keep him managed with body work.  I don’t know if he will ever be able to physically deal with a big career in eventing, but I do know, he makes some beautiful babies. 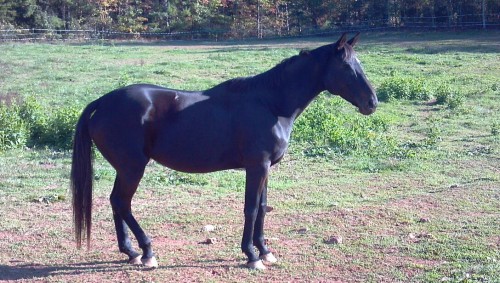 Breeding has definitely been an eye opening experience for me.  There is a lot to it, and it is a risky business.  On July 10th, it will be coming up on a year since I lost my first baby girl, Mia.   I still tear up every time I think about her, and I pray that I will not have to go through something like that again.  Although, as every breeder tells me, it’s part of the game.  If you want to make the fabulous ones, you have to deal with a lot of heartache. 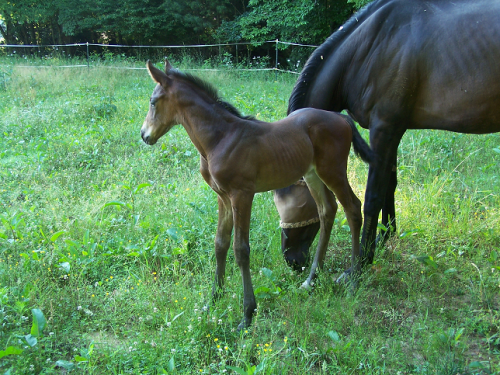 Twiggy and Ellie Mae, happy to be home.

Life definitely has a funny way of working out.  After I lost Mia’s mother, I was a bit gun shy of breeding for myself.  For a few years, Renn bred a bunch of outside mares, but I was too afraid to breed for myself.  Finally, a week before I lost Mia, I took my favorite mare, Pine Island Girl (lovingly known as Ellie Mae), to Greystone Veterinary Services to be bred to Renn.   On July 6th, I brought Ellie Mae home with the hope that she was pregnant. 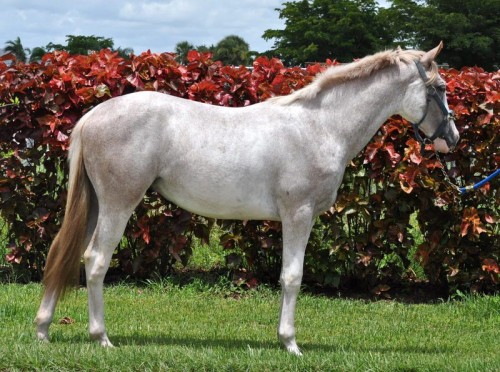 Another of Renn's babies, Fuerst Encounter, owned by Jamie Linscott, pictured as a yearling, out of a paint mare.

It has been a long year, hoping and praying that the pregnancy would go well.  I made the decision months ago that Ellie Mae would be going back to Greystone to foal out.  I wanted to be sure she was in the best hands possible.   On June 6th, 8 days early, Ellie Mae gave birth to a beautiful, leggy filly.  Everything went well, and mama and foal are doing great.  After a lot of thought, I have decided to name my new little girl, Fuerst Fury (lovingly known as Twiggy for her long legs!).  She is gorgeous, well put together, and very friendly. 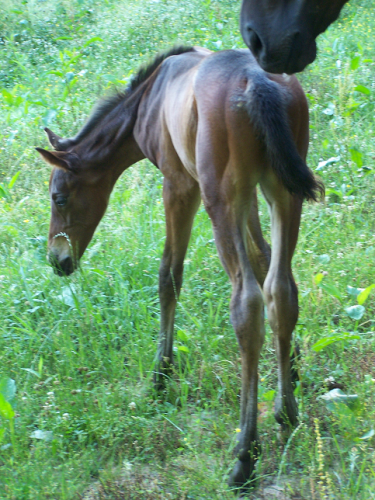 I do not plan to have a huge breeding business, but I definitely enjoy bringing along the babies.  I have another TB mare, Miss Ten Oaks, bred to Renn for a fall baby that I am very excited about.  Renn’s progeny all seem to be stamped with his lovely movement, laid back personality, intelligence, and his beautiful head.  The oldest group is just turning 4, and I am excited to follow their progress.  Being someone who does not have a lot of funding, it is nice to know that I have the chance to produce my own special horses.  I still plan to keep bringing along OTTB’s, as that is a big passion of mine, but I think it will be fun to have some purpose bred horses to bring along as well. 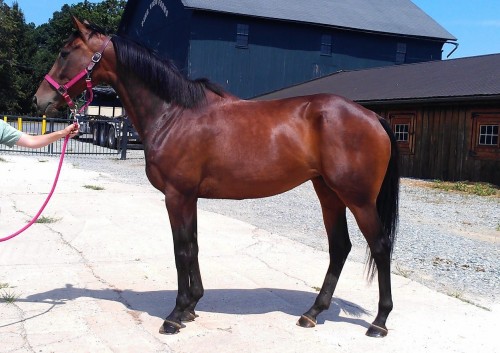 Miss Ten Oaks, aka Oakley, is bred to Renn for an October 2013 baby.