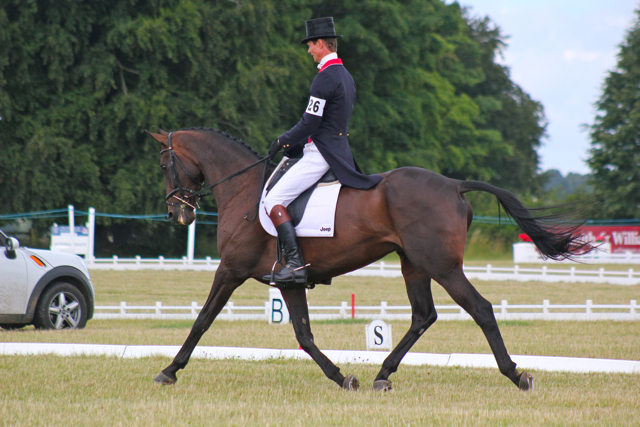 How wonderful to watch Running Order go so beautifully for William Fox-Pitt in the Advanced division at Gatcombe this morning – a real testament to the excellent foundation laid by his former rider Doug Payne who brought him on from a five year old and competed him up to Rolex last year, and to the continuing programme of William’s which is nothing but first class all-round horsemanship and legendary riding.  I had a quick chat at the end of the day with William’s head girl Jackie, who told me she is very fond of R.O and that he’s a pleasure to look after.  William now sits handily in 3rd place on this horse, but also holds the lead on the stallion Chilli Morning, Bramham winner for the last two years running, and rounds out the top 6 on Catherine Witt’s Seacookie. (Scores are here) 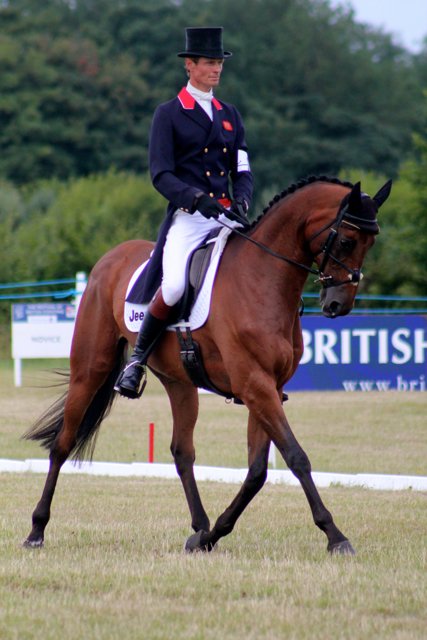 Both Seacookie and Running Order did beautiful tests  – smooth, fluent and deadly accurate, and I’m sorry that Lily and I didn’t get to see Chilli go this afternoon to complete the hat trick. 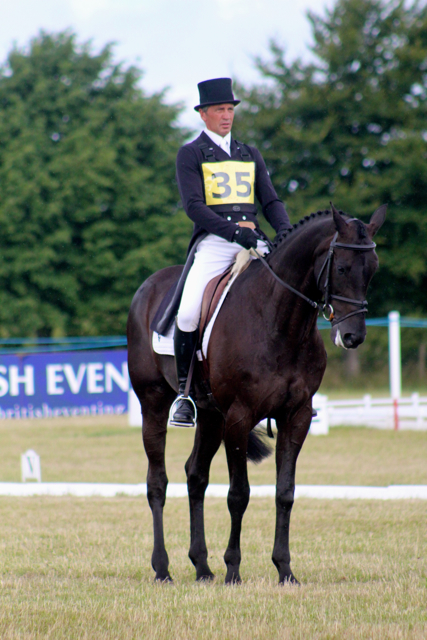 Andrew Nicholson and his Rolex Kentucky ’13 winner Quimbo are in second place after the dressage with another mistake free test; they were 3rd in the Advanced here in 2010, and won the same division in 2011. Lucy Wiegesma and Bill Levett make up the top 6 with Simon Porloe and Improvise in 4th and 5th place respectively. 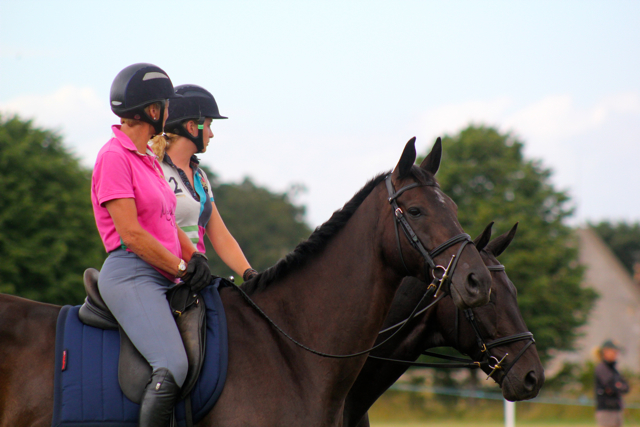 Mary and Emily King watching William do his test on Running Order. Gatcombe is unlike quite any other event in the world; Lily and I spent probably just over an hour watching the Advanced dressage (almost 60 deep) this morning and I lost count of how many members of various Eventing Olympic teams we saw, how many Badminton or four star winners – my mind was spinning, I definitely felt like the proverbial kid in the candy store watching so many quality tests, one after the other. 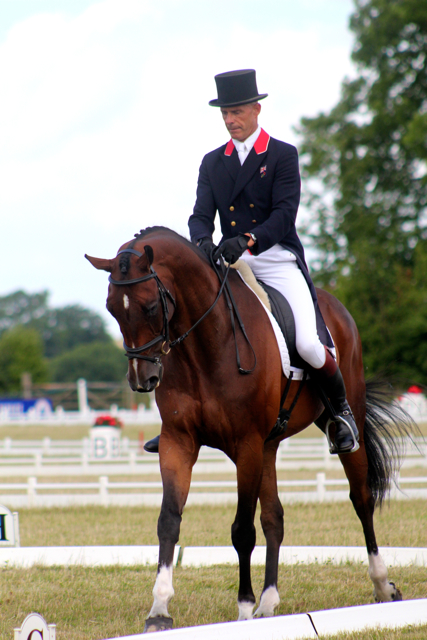 Rodney Powell looks to have another lovely horse coming up the ranks in Happy Go Lucky, a twelve year old gelding by Heraldik. Their test was another absolute treat to watch, and I hear through the grapevine that Will Coleman has recently added Rodney’s Conair to his string, so I’ll be interested to watch that partnership develop. 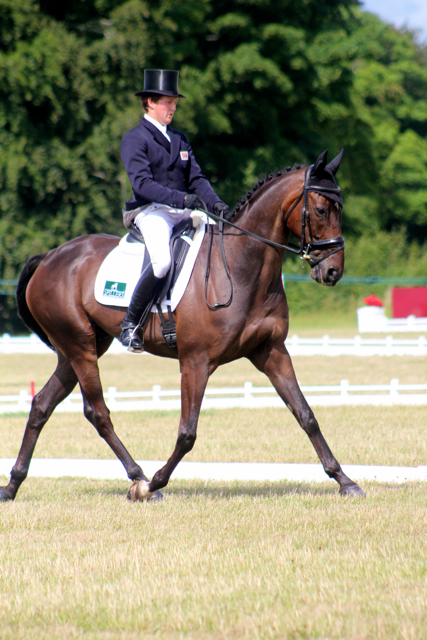 Alongside all the household names and famous faces at Gatcombe there are also plenty of young riders, and exciting young horses coming up the ranks to watch, and Tom McEwen is definitely one of these.  Tom kept his composure to squeeze every mark out of a slightly unsettled Diesel, above, the horse that he’s been selected to represent GB on at the Europeans in Malmo this summer, and he also sits in 10th place on Dry Old Party, the OTTB who was so impressive at Burghley in 2011, and was also 3rd in the Advanced here that year.  Tracie Robinson, GB Eventing Team dressage trainer, and Yogi Breisner were out in force at the dressage today, helping and watching several combinations including Tom, but his real secret weapon may be his super-groom Alex Van Tuyll! 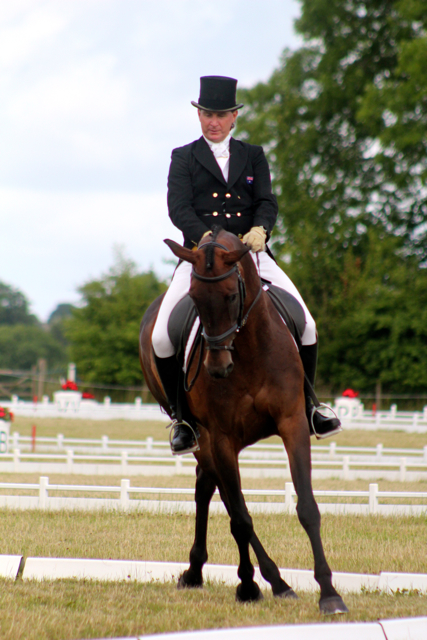 Matt Ryan was a fascinating co-host on the Eventing Radio Show shortly after Badminton this year, and he spoke very highly of this mare, Bonza Moorabinda, and also added that he hadn’t entirely ruled out the Rio Olympics in 2016.  Although not quite as polished as the top group, I was more distracted by his long hair and extra row of buttons on his tail coat! 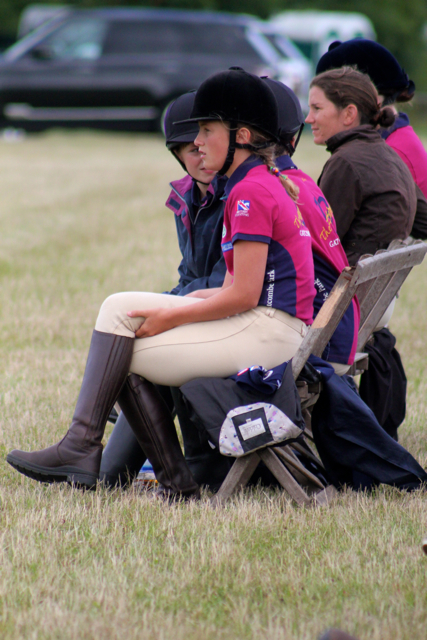 Huge thanks to all the Pony club runners who collected live scores all day, and to the organisation which runs the event seamlessly.  Looking forward to an exciting two days ahead and lots more here on Eventing Nation. Thanks as always for visiting, and Go Gatcombe, the Festival of British Eventing!