This a story about Palmetto Moonshine, an off-the-track Thoroughbred with a goofy personality and one heck of a heart. Tracie Sathoff is an eventer since the age of 11, soon to be 25, and she believes that "the heart of a horse can surprise you if you let it, literally and figuratively." 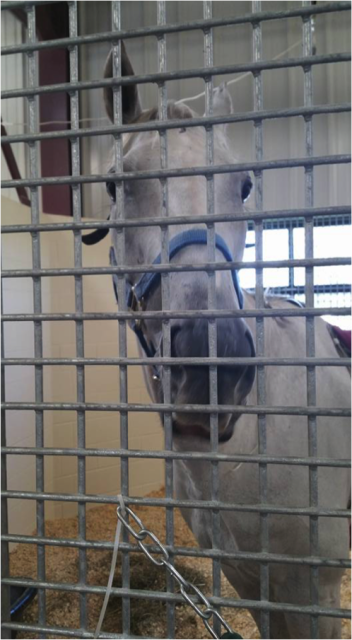 Palmetto Moonshine at the U of M vet clinic hooked up to a 24-hour EKG.

This sport has taken hold of me and never let go — as has the fight and spirit of my favorite breed: the Thoroughbred. Palmetto Moonshine, affectionately known as “Toddy,” is a 9-year-old off-track Thoroughbred gelding. I bought him in the spring of 2015 from Matthew Ulmer in Aiken, South Carolina, and he was shipped home to me in Chisago City, Minnesota.

Toddy quickly took to eventing, and after he figured out the game of cross country, I could feel him really gain confidence. He completed his first Beginner Novice event at the Otter Creek Horse Trials in August in sixth place.

August 21 seemed to be like any other day until I got on Toddy for a quick flat ride. I felt something was off right away and took him back to the barn. I quickly noticed I could see his pulse high up in his neck. I called the vet, and they came out and confirmed his heart was in an unusually fast rhythm and he had a high fever of almost 103 degrees.

I loaded him on the trailer and took him to Stillwater Equine Clinic, where Dr. Brian Dahms treated him until we loaded up again and went to the University of Minnesota Leatherdale Equine Center for a full cardiology exam. Vets suspected Toddy got sick from a tick-borne virus, anoplasmosis. This was tested for after Toddy had been on three days of antibiotics; Toddy had all the symptoms of it.

An echocardiogram showed there was fluid in the sac around Toddy’s heart but no structural damage, which was the first good news in a few days. Toddy spent two weeks at the Leatherdale Equine Center under the care of Dr. Molly McCue, Dr. Ann Kemper, Dr. Jenny Brown, countless vet techs, internal medicine staff and the cardiology team.

His two weeks of treatment could be a novel in itself. Long story short: Toddy’s heart rate when he checked into Leatherdale was between 145 and 160 beats per minute, and he was diagnosed as ventricular tachycardia. (A normal range is about 30 to 45 beats per minute.)

His first week was ups and downs. He had one night where his cecum became impacted, and surgery was not an option. Luckily that cleared up, and the fight to get his heart converted to a normal rhythm continued. On his sixth day at the clinic and after 26 hours on his sixth medication — Amiodarone, a beta blocker used in humans — his heart finally converted to a normal rhythm.

On the morning of Aug. 30, Toddy’s heart was stable in a normal rhythm, but sadly he had a new side effect. His body was reacting to the Amiodarone, and his lungs began to fill up with fluid. The team pulled the Amiodarone and started medication to treat his lungs and prevent a secondary infection.

He spent the next few days under close monitoring and was finally approved to come home to me on Sept. 6! Toddy had a follow-up echocardiogram in October, which showed no fluid around his heart and no structural damage to his heart. This was a great day!

In the last few weeks we again returned to the amazing Leatherdale Equine Center for a follow-up appointment and exercise stress test. Toddy was hooked up to a mobile EKG to track his heart rate and put out on the lunge line. The cardiologists reviewed his stress test and saw no abnormalities in his heart rhythm — again, an awesome piece of news! 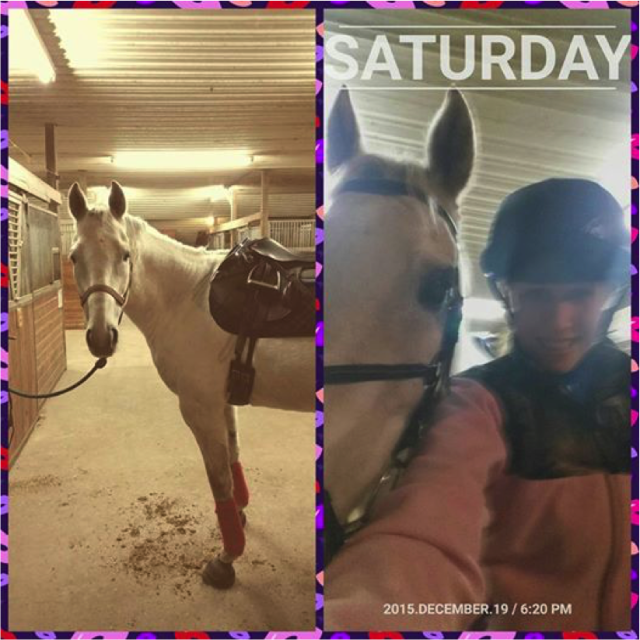 The first ride back!

I returned from a weekend visit this past weekend to saddle up my horse Toddy for the first time in four months. He faced a life-threatening illness and stood strong throughout the chaos. He has shown amazing strength and given me hope in what originally looked like a dismal situation.

Horses are amazing animals, and they continue to help me see hope in dark times. I have joked around with friends who know my whole history of horses and believe I need a T-shirt or bumper sticker with my favorite quote from the movie Seabiscuit. “You don’t throw a whole life away just because it’s banged up a little.”

Toddy has an amazing spirit, and I hope his road to recovery continues to go well and we will be saddling up for a cross country round yet again. I hope this story has given you hope if you need it or just a smile for a horse you don’t know that faced death but was able to stand strong and fight. Kick on, my fellow equestrians, and have a great holiday season and happy New Year!