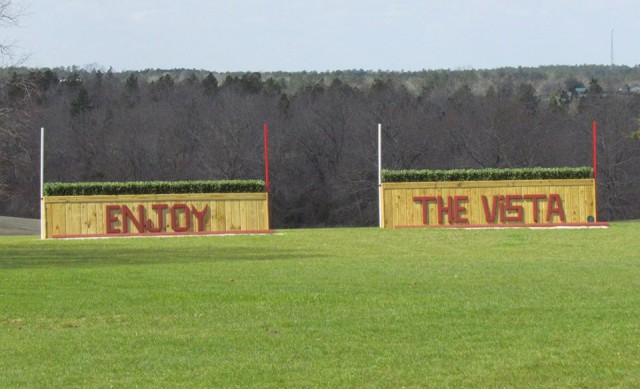 Photo courtesy of The Vista.

The Vista Schooling and Event Center in Aiken, SC has taken schooling to a whole new level. Designed and developed specifically for schooling without a busy competition calendar to manage in between, the venue is meticulously maintained to give local riders the tools they need to prepare for competition. Now in its second winter of operation, The Vista as become a training hub for local eventers year round as well as snowbirds that are in town to get a jump start on the season.

Tom Caniglia put the wheels in motion to develop a schooling facility initially for his students. The former Advanced eventer had begun teaching lessons to supplement his income as a realtor after the market tanked in 2008. “I realized how much I missed it. So I decided to buy myself 10 or 20 acres, build a cabin to live in and teach lessons on my farm,” Tom said. “I started driving around and looking at properties with Bruce Hovey and we happened to drive by this place. I was looking for 20 and this is 187.”

The property was too good to pass up and Bruce encouraged Tom to move forward with his idea on a grander scale. Tom had long been frustrated with the time he spent on the road just to get to his students, and when it came to practicing cross country, the scenarios available weren’t always ideal. “The fences were far apart, sometimes the footing was not great, and it wasn’t always open. I said it would be so much better to do this and have something set up specifically for schooling and not events.”

Seeing an opportunity to remedy this deficiency, Tom and Bruce appealed to two former business partners. The four of them – Tom, Bruce, Scott Bradford and Ketan Patel – put their heads and finances together to buy the 187 acres and develop The Vista into what it is today. 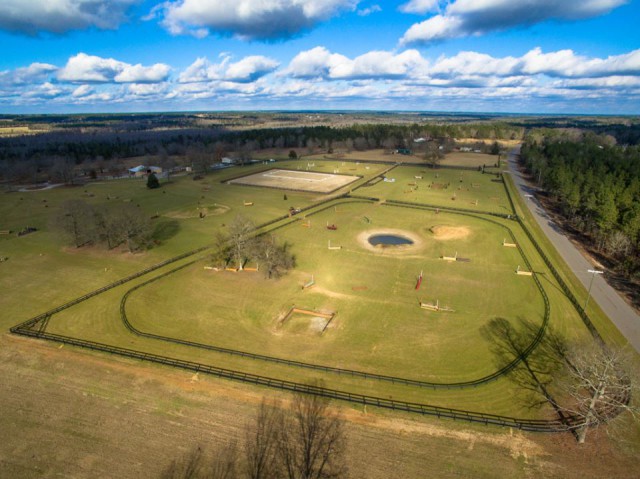 Photo courtesy of The Vista.

There are more than 100 cross country fences from Starter logs on up with more on the way from builder Jamie Gornall, plus multiple water complexes and an 800-meter gallop track. There is a also a large and small sand dressage arena as well as a newly built 300×400 stadium jumping arena.

At the beginning of this venture, Tom and his partners vowed that for the first few years they would put all proceeds back into the property, and as the the venue has become more active they have watched and listened to the riders and made adjustments to meet their needs.

The Novice field is used more often than any other area, so that section has doubled in size, and the stadium jumping arena was built as an alternative to the grass derby field. As more upper level eventers are making The Vista a part of their training program, additional upper level jumps are being added and a 1/4 mile gallop is in the works, but so are new trails through the woods being planned for the riders who just want to hack out.

“We ask them what they want and then we build it,” Tom said. “It doesn’t matter what I think we need or want to build, it’s whatever the people using the place want and need.” 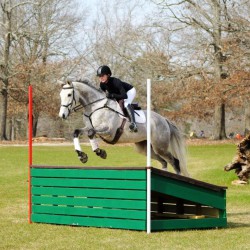 You’ll find tables of sizes and shapes at The Vista. Photo courtesy of The Vista. 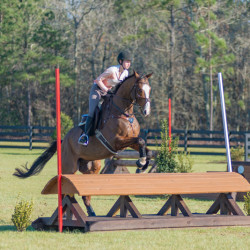 There are portables and fixed features for horses and riders of all levels. Photo courtesy of The Vista. 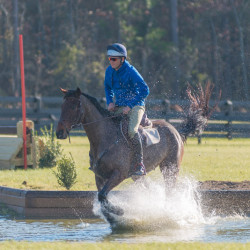 Boyd Martin schooling at The Vista. Photo courtesy of The Vista.

Tom’s biggest job, however, is maintaining the footing, which also happens to be the greatest expense. The ground is tirelessly tended through an intricate irrigation system, regular fertilization and old fashioned manual labor.

Twenty-seven thousand feet of pipe is buried under the surface of the schooling areas for irrigation, but Tom explained that the watering schedule is carefully monitored. “Unlike a lawn you can’t just schedule it on a clock and have it done. I literally walk around and watch horses work. If horses hit the ground and don’t leave enough of a footprint or the grounds sounds hard then I water that night. If there is too much of a footprint then I rest that area.”

Instead of dragging the fields, they are rolled to level out bumps, and the grass is mowed once a week to promote a thick, tough turf. The fences are moved around every couple of weeks for variety and to reduce trauma to the ground, but Tom goes so far as to rake and tamp the take-off and landing between horses.

“A lot of places have jumps and have what we have, but the main thing we have is footing. It’s never too soft because it drains well and when it doesn’t rain we water it. In summer we have people from all over the Southeast come because the ground is better.”

The effort put into maintaining the footing just for schooling may sound excessive, but with the number of horses visiting the venue every day, it’s a necessity.

The popularity of the venue has far exceeded Tom and his partners’ initial expectations. In the first year they were hoping for ten horses a day in the summer and 30 in winter, but a staggering 80 horses on grounds was a typical day last winter. When you think about it, Tom effectively has the same number of hoofprints on his course as a horse trials several times a week.

However, hosting horse trials is not the end goal for Tom and his partners. Their mission is to provide their customers with a safe, fun, state of the art schooling facility (with the occasional derby or gambler’s choice jumping round thrown in for flavor).

Tom said the Aiken community has been extremely supportive of the venue and they make an effort to make it as inclusive as possible. For frequent flyers, there is an annual membership option offering unlimited access to the facility and other member perks.

Local business owner Sarah Accord lives just two miles down the road, and while she has an arena at home, she trailers over to The Vista every day to train her young horses or watch others ride. “Do I want to spend time dragging and moving jumps around or go ride?” she asked. Fair point!

“There is always something different and it is so well maintained. It’s nice to watch other people and see what they’re doing and it’s good for the horses to be in that traffic and listening to horses gallop,” Sarah continued. “I’m going for bit of community but at the same time you can do your own thing. It seems like people are mostly coming for schooling which you don’t need to do all the time, but it’s just a good venue to get horse out and see a lot of sights.”

Eventer Mellisa Warden has several horses competing at different levels. Nearly all of them make weekly (or more) visits to The Vista. Mellisa feels strongly about the benefits of regular cross country schooling, ant the appeal of The Vista specifically is the ability to school with a slow, steady progression of difficulty.

“You have to school cross country to have good cross country horses. You’re not going to be able to accomplish learning how to gallop at a Preliminary or Intermediate table by cantering around an arena down to 3’9” oxer,” Mellisa said. “Having the ability to go someplace and build your horse’s confidence at a smaller fence and then jump a bigger fence at a gallop makes a huge difference.

Find The Vista on Facebook or visit their website for more information on schooling and upcoming activities.