We’re excited to welcome Ryan Bell as the newest addition to our stable of Blogger’s Row writers. Ryan is a Grand Prix dressage rider and trainer based in Georgia who recently took up eventing as a side dabble. He has his sights set on qualifying for and competing at the American Eventing Championships but says, “Even if I don’t qualify for the AECs, I am having a blast learning about a new discipline and pushing myself out of my comfort zone.” His first blog had us in stitches — keep an eye on Blogger’s Row in the coming months for more “Adventures of a Rogue Dressage Rider”! 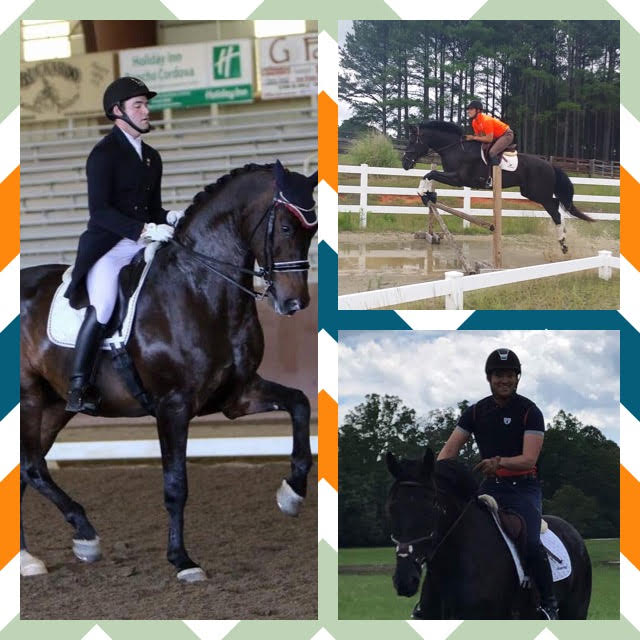 I decided today would be the day I would begin chronicling my journey from a frustrated rogue dressage rider, into an mediocre eventer with ambitious eyes set on qualifying for the AECs.

First, maybe I should back up to clear up the confusion from the first sentence. I am a dressage rider located in Atlanta, GA. I know dressage to many eventers screams BORING! But not in my world. My dressage world is filled with catty trainers who ignore you one minute and then treat you like family, the same world that’s filled with a million egos and their thoughtful grace blessing the dressage ring with their presence. So, my dressage world is not boring at all, in fact, there is a never a dull moment.

Ryan inside the box:

I know this type of social jungle is prevalent in every sport and every corporate environment, so dressage is not special. While getting bogged down in the thick of human interaction, I decided that I needed a hobby to just have fun, no pressure or drama, just fun. So I began frantically searching (picture type A dressage rider on a project) and had several impulsive and albeit entertaining, unsuccessful ventures in the hobbies. So at the urging of my groom (Pony club DC and eventer mom) I decided to try eventing.

I immediately decided this was the hobby for me! I loved the rush of pushing myself out of my comfort zone of a rectangle arena, and I mean pushing myself extremely far outside of that arena (all the way to a cross country course!!) With the help of my groom and the extremely charitable and friendly dressage community (also a bit of a new experience for me) I went cross country schooling.

After starting in the stadium jumping ring and a few warm up fences (with less than ideal distances) we headed out to the cross country. I channeled my inner Michael Jung, and also my inner SuperMan, and bravely trotted over an amoeba log. I thought, WOW! I evented! I felt proud and accomplished, until I was instructed that I needed to jump some other jumps, some actual jumps. So I canter slowly and controlled (again, picture type A dressage rider) around some logs, over a small ditch, and even through the water.

Ryan outside the box:

Now I really felt accomplished, and I felt determined to set a goal and follow it through. With the help of my SuperGroom, I found a great event horse from a fantastic owner who agreed to lease him to me to reach my goal of qualifying for the AECs! Next time I will tell you about my new buddy, Grant, and our already exciting adventures.

Earning his USDF Bronze, Silver and Gold medals with his own horses, Ryan has competed over 14 horses to the FEI levels including six horses to Grand Prix. Ryan has trained extensively in Holland and Germany with some of the best riders and trainers in the world, including several former #1 world ranked riders. A veteran of the junior divisions, Ryan competed extensively through the international young rider, small tour, Under 25 Grand Prix and Grand Prix classes. Ryan has competed at many championships throughout the  country. In addition to his own riding, Ryan has helped several of his students earn their Gold medals. Based in beautiful Madison, GA, he owns and operates MRK Dressage with partner Micha Knol. Their business focuses on sales of quality dressage horses.