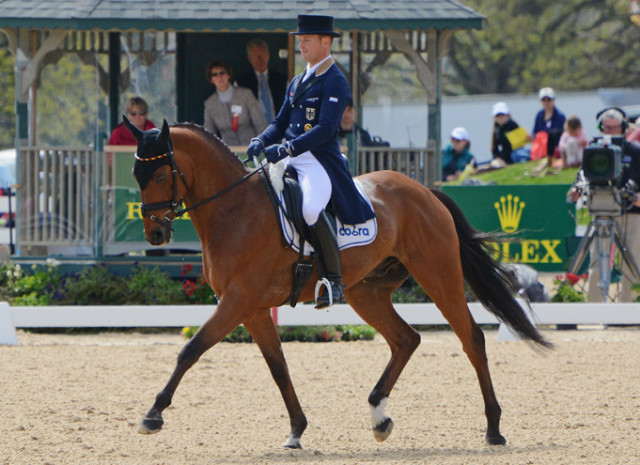 Refresh this page frequently for the latest updates from dressage this morning, and don’t forget to follow us on Twitter for live scores and commentary. Go Rolex!

4:40 pm ET: With the last ride just finishing, that’s the end of the action from Friday at Rolex – for this open thread, that is. Scroll down for a recap of action from the afternoon group, click here for the morning open thread, and stay tuned for Jenni’s full recap of the Rolex dressage and Leslie’s press conference reap. I’ll leave you with the top 10 going into cross-country:

4:31 pm ET: Can you see Sally O’Connor cheering for Boyd from within the Land Rover? You know you rode well when Sally O’Connor is cheering. 74 horses entered the dressage arena at Rolex 2014. The last of the pairs to enter was Boyd Martin and Master Frisky. They showed a great deal of potential and some lovely canter work to move onto cross-country on a 46.3.

Long line for @laurenkieffer poster signing – everyone wants a piece of her & Veronica! pic.twitter.com/CkXTgDPaku

4:18 pm ET: Phillip protected Mighty Nice just the right amount in the trot work to get excellent impulsion without the risk of a bobble. They followed the trot with their typical lovely walk work and then a rhythmical canter section. Clap along if you feel like happiness is the truth because I’m happy.

4:16 pm ET: Well, what a great day of Rolex dressage that was! So many awesome competitors!

Reggie sauntering out of the arena on a long rein like "whut." #lovehim #prostatus #RK3DE

4:16 am ET: Leslie W has clearly taken over the Twitter feed.

4:10 pm ET: My commentary for Buck’s ride: Go Reggie!!! Reggie has nothing left to prove and Buck can just focus on trying to have fun with his wonderful partner this weekend.

Drama drama! Michael Jung and Sam throw down a slammin' score of 36.3 to tie Tim Price for the lead. #RK3DE

Feels like crowd here will be disappointed not to see Michael Jung ace this, but equally disappointed to see him ace this! #doublydammed

3:51 pm ET: La Biosthetique Sam’s record under Michael Jung is almost laughably good. The horse hasn’t placed outside the top 3 in an FEI competition since 2008. Although, in fairness, the horse is competing in just his first 4* since 2013. In a Friday afternoon atmosphere that has made so many riders dial back and play it conservatively, Michael was able to press right into his veteran partner and generate lovely forward gaits. Sam also took advantage of the great dressage horse’s secret weapon — a high-scoring walk. Why do I call Michael the “terminator?” It’s partly because his timing in dressage has machine-like precision. He always asks Sam to do the right thing at exactly the right time. As Shannon Lilley said on the USEF Network, we are so fortunate to have Michael and Sam competing here in America again.

3:47 pm ET: Eventer, race car driver and commentator, and world traveler, Liz Halladay-Sharp drew the challenge of following William in the dressage arena. Liz did an awesome job of keeping the fiery Fernhill By Night as cool as a cucumber. I’m excited to se this pair go around Derek Di Grazia’s course tomorrow.

3:34 pm ET: Lauren Kieffer and Veronica only had one place to improve over their 2nd place performance at Rolex last year. Lauren did a terrific job riding Veronica through the tense atmosphere to score a 44.2. A lesser rider or a rider who didn’t know her horse as well as Lauren does would have scored over 50 on Veronica today. 44.2 betters Lauren’s score last year by a couple points, provisionally.

58.8 for Werner Geven & Vilas County leads us into the last break of the day #rkde pic.twitter.com/ThKyroPLxh

3:26 pm ET: Werner Geven of the Netherlands celebrating his first time back at Rolex since 2007, as the awesome John Kyle pointed out on USEF Network.

3:07 pm ET: USEF Network guest commentator Shannon Lilley said that Pavarotti has a lovely canter, with great reach and lift, and I couldn’t agree more. This top Canadian pair is expected to withdraw before the cross-country.

Oh my. Charlotte announces Jessie just had a baby in Feb as she's circling the ring and the crowd goes a bit nuts in awe! Shhhh #RK3DE

2:54 pm ET: The long line of lovely mares at Rolex continues with Demeter, ridden by Marilyn Little. Much like riders wearing helmets in dressage, it’s nice that Marilyn’s transition from show jumping into eventing is so complete that it feels like almost a non-story at this point. Demi relaxed as the test went on, finishing on what I think is their best 4* test so far and probably the best overall dressage test I have seen from them. Demi scored 6.7 points better than Rolex last year, provisionally.

2:50 pm ET: Look at the walk on Nicola Wilson’s lovely ride, Annie Clover. I’m excited to watch this pair jump this weekend as they defend their provisional 45.6 dressage score. How is Nicola Wilson one of the least discussed European riders at Rolex this weekend?

The British camp could do with a boost, let's hope @NWEventing & @foxpitteventing are just the ticket. Annie Clover in next

2:34 pm ET: It’s hard to think of a more deserving pair than Jennie and Cambalda. Ping’s history of bad luck here at Kentucky is well documented. I’ll be about the millionth person to say that this pair is due for a great weekend. After a 55.0 in 2014, the pair scored 47.9 provisional today. Onward!

2:23 pm ET: Oh, wow, another 4* ride for Colleen. After taking her other 4* horse to complete all of the northern hemisphere 4*’s. And this one is super nice on the flat. But sure, let’s never put Colleen on an official training list. Makes perfectly good sense to me.

2:21 pm ET: Bill Levett had an early bobble with Improvise, but the pair got better and better throughout their test to score 48.4. An early bobble is so hard to overcome because the judges can get in a groove of lower scores. Bill Levett is awesome and everyone should cheer for him. And that’s all I’m going to say about that.

Ugh. Huge groan from the crowd as Improvise breaks in first medium. A shame for Bill Levett #RK3DE

Australia's Bill Levett and Improvise leading off the next group of #Rolex15 dressage. #RK3DE pic.twitter.com/p3FizEoQtl

1:55 pm ET: Fan favorite and true amateur Rolex competitor, Kevin Keane is riding in his second 4*, competing at his first here last year. Kevin is a top top sports medicine veterinarian who I have and happily would trust with the care of my horses. And at the end of each day spent treating horses, he goes to the barn and rides “Butterfly.” I think we might be able to give Kevin the most improved award as well — his seat and overall accuracy have come so far over the past year. This is an amateur looking like a very top competitor at Rolex. Let’s appreciate that for a moment. Kevin wisely held back on the canter work a bit, leading to better changes. 51.6 provisionally. Go KK!

53.3 for Will Faudree and Andromaque. Wait till you see her jump tomorrow! A cross country machine #RK3DE

1:49 pm ET: Will Faudree and Andromaque are one of the many pairs I am cheering hard for this weekend. Missy has a special place in my heart as being one of my very favorite horses for a long time now. I remember watching Missy at her first few intermediate competitions and just knowing that we would see her at 4*’s. Missy returns to Rolex after competing here in her first 4* in 2012, where the pair finished 16th. Missy has battled the unlucky injury bug and I just feel like she is due for awesomeness. As much as I like Missy, it’s clear that no one on earth loves her as much as Will.

52.7 for Lynn Symansky and a wide-eyed Donner. They were double clear in their last XC run at this event in 2013 #rk3de

1:40 pm ET: Lynn Symansky rode Donner the flying deer a little conservatively today to make sure they finished on a solid score. I’m inclined to think that Lynn knew exactly how much to push for, given the atmosphere and her goals for the weekend. Here’s to hoping Lynn and Donner have an awesome rest of the weekend.

1:31 pm ET: Lynn Symansky is about to enter the arena with Donner. In my opinion, Lynn’s ride is the demarkation on the start list for where we could really start to see the top of the leaderboard get shaken up. Go Donner!

1:24 pm ET: USEF Network’s Frankie Thieriot reports High Kingdom kicked out in the stables and cut his leg. Frankie said that when Zara and her team got to the warmup, they realized that it was more significant than they had originally thought. High Kingdom has returned to the stables for sutures to the small cut. Zara will likely look to re-route to Badminton as she reportedly still has an entry there for High Kingdom. The entry was likely held for just such a contingency. It’s quite the luxury to get to re-route to a 4* so quickly, as High Kingdom is likely on very peak form. Maintaining such form until a summer 4* can be a real challenge, especially from a soundness perspective.

1:13 pm ET: In a surprising moment, Zara Phillip and High Kingdom withdrew from the warmup, just a few minutes before their ride time. Zara was seen standing beside High Kingdom with her team looking on closely as their withdraw was announced. Much more as we know it.