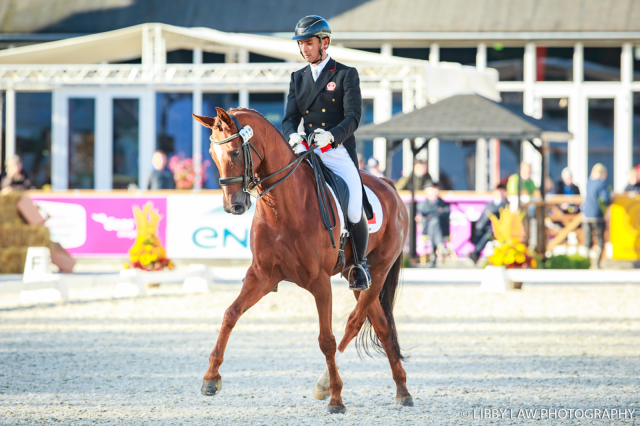 Alex Hua Tian and Don Geniro scored 37.3 as the final pair to go on the first day of dressage action here at Military Boekelo CCIO3* in Enschede, Netherlands, giving China the lead at the conclusion of day one.

Don Geniro, a 10-year-old Hanoverian gelding (Don Kennedy X Gina, by Giorgione) owned by Pip Higgins, Pam Dews and Sarah Higgins, is notoriously spooky in the first phase, but Alex expertly kept the lid on to claim one of the three scores we saw in the 30s today.

“He was quite a lot hotter than he was at Blenheim, where I think he probably did his best test all year. I thought he felt really relaxed and really good in the warm-up, and then he went in and just caught me out, spooking at the judge at E. But I’m delighted. I’m glad the judges were brave and gave him the marks despite his moments of tension,” Alex said.

“I don’t think it’s going to be a dressage competition. It absolutely poured this morning. We’re due more rain tomorrow and Saturday. Boekelo can often be very wet. I don’t think it will be any different this year. It’s a stiff course and is going to catch people out for sure.” 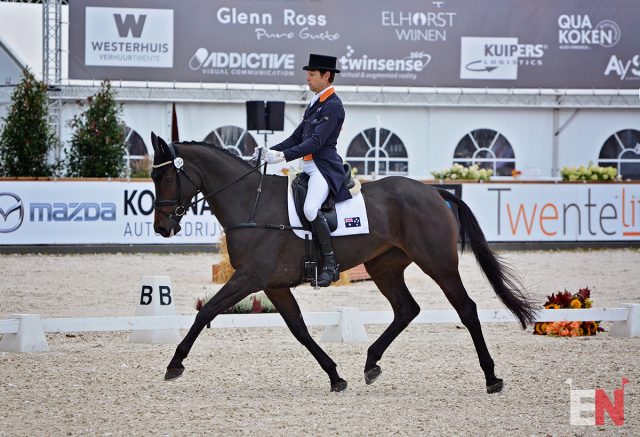 Australia’s Chris Burton scored 39.3 with Quality Purdey to sit in second place. Chris recently took over the ride on the 11-year-old Oldenburg mare owned by Claire Poole, and their new partnership started off with a bang at Le Pin au Haras in August, where they won the Nations Cup CICO3* on their dressage score of 36.7.

Chris comes forward as a strong favorite to claim victory at Boekelo, which would give Australia a win for the first time in the history of event. He is also competing Kate Walls’ Cooley Lands, who won the 8/9-year-olds CIC3* last month at Blenheim Palace International Horse Trials.

Julia Mestern and Grand Prix Iwest were the only other pair to score in the 30s today, delivering a personal best at three-star level to sit third on 39.6. This pair is coming off a win in the Nations Cup CICO3* at Waregem, and Julia is no stranger to Boekelo, having won in 2008 and 2009 with Schorsch.

Looking to the rest of the leaderboard at the conclusion of day one, France is occupying the next two spots, with Aurelien Leroy and his own Seashore Spring, an 11-year-old Selle Francais gelding (Erudit X Bubbles, by Jasmin), in fourth on 41.1.

Astier Nicolas is making his return to the highest level of the sport after missing a large portion of the autumn season due to breaking his knee early in the summer. He scored 41.1 with Vinci de la Vigne, an 8-year-old Selle Francais gelding owned by Philippe and Marie-José Gerard, to sit in fifth place. 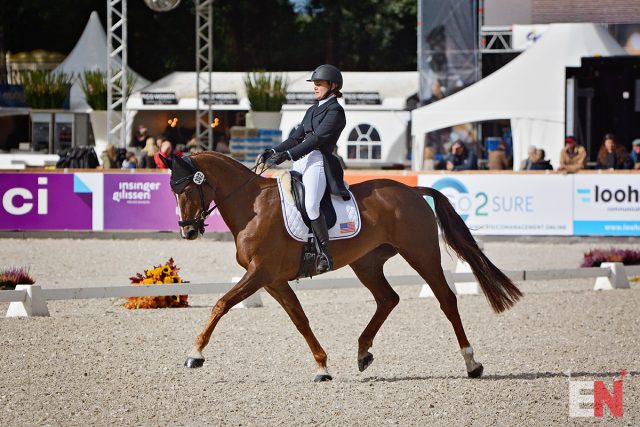 Katherine Coleman and Kalai LLC’s Back to Business II scored 51.3 as the first pair out for Team USA to sit 16th on the first day of dressage. She recently started training with British eventing team dressage coach Tracie Robinson, who Katherine said has helped immensely with the mare’s dressage.

While the mare’s flying changes are not yet confirmed, Katherine feels confident that once they get those nailed down, Back to Business will consistently be scoring in the 40s in the first phase. Their best test so far at the level came at Burnham Market in April when they scored 48.3.

“I’ve really struggled with her flying changes, and I really need another winter to work on those,” Katherine said. “She’s been really spooky about the ring, so I tried to get her in there yesterday as much as I could. I was a little bit concerned because she’s normally not a spooky horse. She held it together, but those changes are costly at this point.”

“Bizzy,” a 10-year-old Irish Sport Horse mare (Harlequin Du Carel X Moxella, by Quick Star), stepped up to the three-star level at Barroca d’Alva in Portugal in March and completed her first CCI3* at Tattersalls in May in flying form, adding just 2.0 show jumping time penalties to her dressage score. 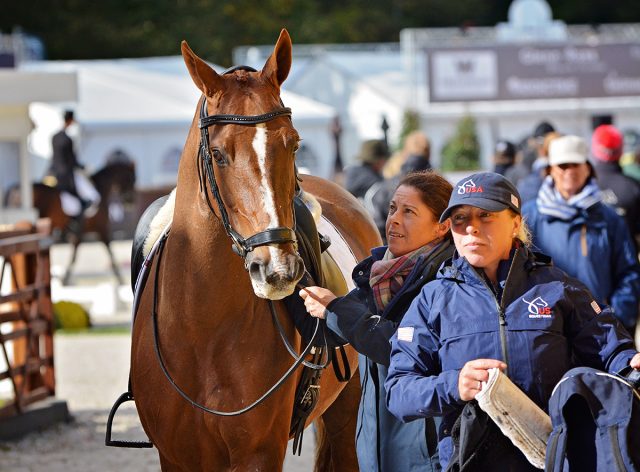 Katherine and Bizzy are looking for a solid run here at Boekelo after problems at their previous two international competitions, with the mare having a freak fall in their show jumping round at Millstreet CIC3* and two runouts on cross country at Blenheim.

“But after throwing her in that atmosphere I feel ready for the cross country at Boekelo with all the crowds. I’m really excited about her longterm. She’s young and has got it all. In a year or two’s time, she’ll be really competitive.”

Team USA walked Sue Benson’s cross country course with Chef d’Equipe Leslie Law this afternoon, and we’ll be bringing you their comments on the track tomorrow. In the meantime, you can check out photos of each fence on course here.

Three cheers for super grooms! Sparks Watson, better half of Sam Watson, battled the elements at Boekelo today with a smile on her face #mbe17

Looking to the Nations Cup leaderboard at the halfway point of dressage, Germany leads on 87.0, with New Zealand and Australia tied for second place on 90.2. Remember that only 10 points separate Great Britain and Germany on the series leaderboard. Great Britain currently sits fifth on 96.0.

If you didn’t watch the free live stream from Boekelo today, you are seriously missing out. Diarm Byrne and Nicole Brown are providing fantastic commentary, and Laura Collett, Liz Halliday-Sharp and Paul Tapner joined them in the booth throughout the day to weigh in.

We have our remaining two American combinations still to come tomorrow. Liz Halliday-Sharp and Deniro Z go at 11:41 a.m. local time/5:41 a.m. EST tomorrow, with Caroline Martin and Pebbly Maximus as one of the final pairs to go at 4:04 p.m. local time/10:04 a.m. EST.

Stay tuned for much more from Boekelo, including exclusive facts and figures on the field from EquiRatings, the official statistics provider of the event. Don’t forget to check EN’s Instagram for bonus photos! Go Eventing.