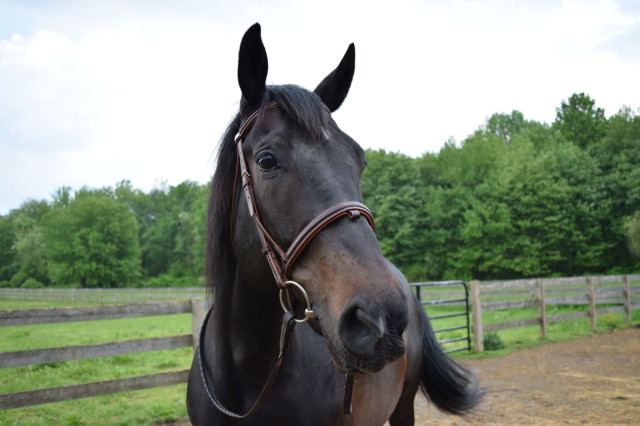 Rufus - this little (ok, not so little anymore) guy almost gave me a HEART ATTACK! Photo by Lorraine Peachey

The Fourth of July is one of those completely awesome holidays, in my humble opinion. It’s a time when I like to think about all the individuals who suffered hardships and lost their lives when they stood up to defend the United States of America. My chosen barn colors are red, white and blue, because I hold all things stars and stripes dearly. Heck, one of my horses was even born on July 4th (Happy Birthday Mark!)…how much more patriotic than that can you get?

Sure, the fireworks and picnics are great, but let’s make sure to remember the meaning behind this particular day. This Fourth though, my day started out with a dose of complete and utter terror, when I had my very first experience with choke. Let’s rewind to this morning, shall we?

So I’ve been around horses long enough to know that there are more strange and obscure maladies than I can keep track of. Many injuries and illnesses are only ones that I become familiar with if my own horses, or horses belonging to someone that I know suffer from.

This morning when I went down to the barn to feed my three geldings, everything seemed normal. I was greeted by a chorus of nickers, and proceeded to give everyone their breakfast, and then start cleaning stalls while they ate. After a minute or two, I noticed my youngest gelding, Rufus, seemed to be acting a little weird…and here’s where the morning started to go from normal to slightly disturbing.

Rufus stopped eating his grain, and started to paw very violently at the floor of his stall–which was weird since he LOVES his grain. He then started to put out his front legs and stretch; I like to call this his “downwards horse” pose, which he normally does once in the mornings. But not while he is trying to eat his grain. During the next 5-10 minutes, Rufus started to circle his stall, shake his head, and slam his body into the stall wall…all while pausing to paw some more or repeat the “downwards horse” pose.

I was absolutely beside myself, because the first thought that came to my mind was the “c” word. You know the one that I’m talking about. The word that horse folk never like to mention, but always worry about. I was pretty sure that I was standing and watching my young, promising baby boy start with an onset of colic. He ate all of his hay from overnight, and there was plenty or manure…but I couldn’t think of what else the symptoms would point to.

I pulled him out of his stall and started walking him around the paddock to keep him moving. But, Rufus wanted to keep stopping to paw. And paw. And paw some more. Uh oh. I stopped him to try to check his gut sounds, but he just kept pawing.

It got to the point where I decided that I needed to call and speak with the on-call vet at the practice that I use. I paused to take Roo’s temperature, as I always like to have my full bearings on the situation before speaking with a vet. My sister held Rufus while I checked, and rubbed his neck to try to keep him quiet. And interestingly enough, he stopped pawing and became eerily calm.

Roo’s temperature was normal, and my sister returned him to his stall as I called into the answering service for our vet’s office. When Rufus was put back in his stall, he was acting completely normal. He walked back and polished off his grain, paused to sip down some of his fresh water, and then started eating the hay I put in his stall.

I was absolutely baffled. About that time, my cell started ringing and I got a chance to speak with the on-call vet about the symptoms that I had just witnessed with Rufus. When I finished recounting the events, the vet told me that it sounded like Rufus has gotten choke while eating his grain – she said that this is a condition that can be brought about when younger horses are excited and eat too fast without chewing their food, or in older horses with bad teeth.

Once the word choke was mentioned, things really started to add up in my mind. The on-call told me that choke is often mistaken for colic (check) and can be very disturbing to watch (double check). She mentioned that while a horse can still breathe, they basically have a lump of food stuck in their throat – usually it can pass on it’s own, but sometimes the horse needs the assistance of a vet.

Thankfully, it seemed that Rufus passed his case of choke pretty quickly. I told my sister that perhaps her rubbing his neck helped. In any case, my ‘oh crap’ moment of the day was when I stood completely terrified that my Rufus was starting to colic.

In my 17 years around horses, I have never seen a case of choke before today. Now that I have, I can add it to my mental catalog of equine maladies. It was, without a doubt, a terrifying experience. But now I am familiar with it’s symptoms, so that I can hopefully recognize choke if I ever have the misfortune of seeing it again.