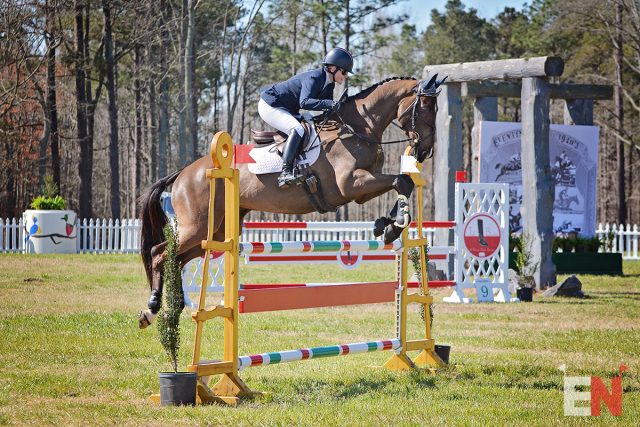 After throwing down the gauntlet in dressage this morning at the Cloud 11~Gavilan North LLC Carolina International, Kim Severson and Cooley Cross Border jumped a beautiful clear round over Marc Donovan’s show jumping course to hold the CIC3* lead on their record-breaking score of 20.8.

Kim said she has been jumping with new USEF Eventing Performance Director Erik Duvander, and he has offered several key pieces of advice, such as using a placing pole in warm-up to get the horse thinking a bit more. “For me (Erik is) really good because he doesn’t try to change too much … As far as jumping goes, we don’t mess with that part too much because that’s just how (Cross) is.”

Fourteen of the 56 combinations in the CIC3* (25% of the field) jumped clear rounds inside the time over Marc’s course, with the time allowed of 79 seconds proving tough to make. Eight combinations jumped clear rounds but accumulated 1 or more time penalty. The CIC3* here trends towards 33% of the field jumping clear, according to EquiRatings, so the course proved especially challenging this year. 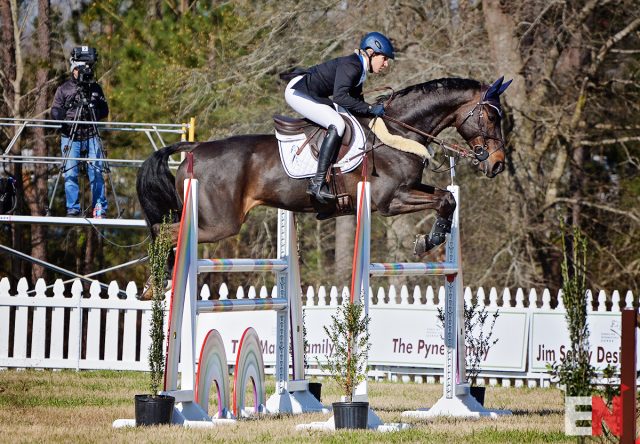 “(Marc) had a few lines that tempted you into riding it a certain way and caught people out,” Liz said. “He always builds a really good course and makes the time tight, which forces people to get a bit out of their comfort zone.”

Pairs who jumped clear rounds inside the time were rewarded with big jumps up the leaderboard. Lynn Symansky and Mary Ann Ghadban’s Under Suspection, a 14-year-old Holsteiner mare (Contender X Naomagic I, by Exorbitant xx), jumped a lovely clear to move from sixth up to third place on 28.5.

“It’s the first proper track I’ve jumped with her,” Lynn said. “I’m still getting to know her a bit. We’ve done a few horse trials this spring in Florida. I thought she jumped really well (after being) a bit hot in warm-up.” 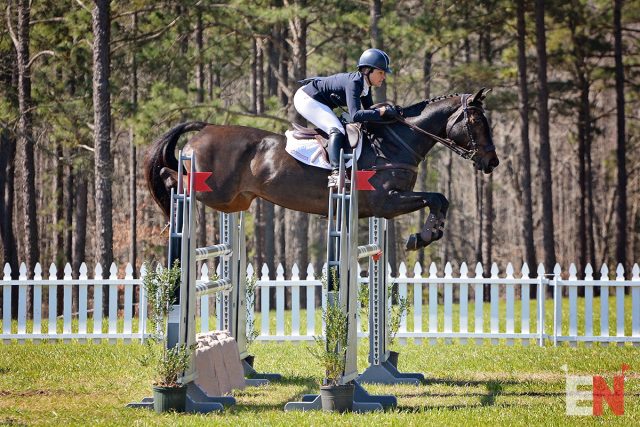 Liz Halliday-Sharp has both of her horses sitting in the top five thanks to a super clear round with Deniro Z. The 10-year-old KWPN (Zapatero VDL X Zonne-Trend, by French Buffet xx) owned by the Deniro Syndicate and Ocala Horse Properties moved from equal ninth up to fourth place on 28.9.

Doug Payne and Debi Crowley’s Vandiver, a 14-year-old Trakehner (Windfall II X Visions of Grandeur, by Mystic Replica xx), showed off their show jumping skills by slicing and dicing across the course, delivering one of the fastest clears of the day to move from 12th to fifth on 29.6.

We are cheering extra loudly this weekend for Randy Ward, who has returned to the three-star level after a 15-year hiatus. He delivered a stunning test this morning with Donald Devine’s Grando, a 9-year-old Westphalian (Grasco X Queen Live, by Quo Vados I) to sit seventh after dressage, and added 1 time penalty in show jumping to move to sixth on 29.8. 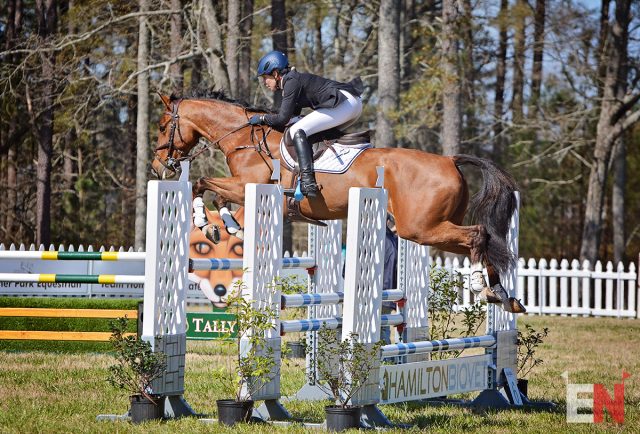 It’s a big weekend for Allison Springer, as she has two horses stepping up to the three-star level for the first time here at Carolina. Lord Willing, a 10-year-old Holsteiner (Lord Z X Legende IX, by Coriano) owned by the Lord Willing Syndicate, jumped clear and inside the time to move from 13th up to seventh on 30.5.

Chris Talley is having a cracking weekend with Hannah Salazar’s Sandro’s Star in the stallion’s three-star debut. After a competitive dressage yesterday to sit inside the top 15, Chris piloted the 10-year-old Oldenburg (Sagnol X Poetic Patter xx, by Nostalgia’s Star xx) to a dazzling clear to move up to eighth place on 30.6.

Switzerland’s Felix Vogg is based in the States through the spring to compete at the World Equestrian Games test event at Tryon in two weeks, and he is making a case that his mount Colero is one to watch. The 10-year-old Westphalian (Captain Fire X Bonita, by Bormio xx) owned by Jürgen Vogg left all the poles in the cups to move from 15th up to ninth on his dressage score of 31.0. 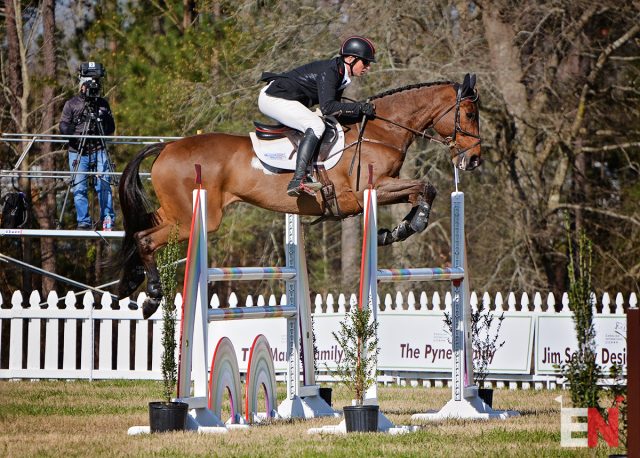 Sara Kozumplik Murphy and Rubens D’Ysieux, a 13-year-old Selle Francais (Balougran X Silver Shadow, by Mr Blue) also delivered a clear round inside the time to move from 18th up to round out the top 10 on 31.7. (We also have to send a special shout out to Sara’s four-star partner Fly Me Courageous, who is back out competing in the CIC2* at Carolina this weekend. Welcome back, Ziglet!) 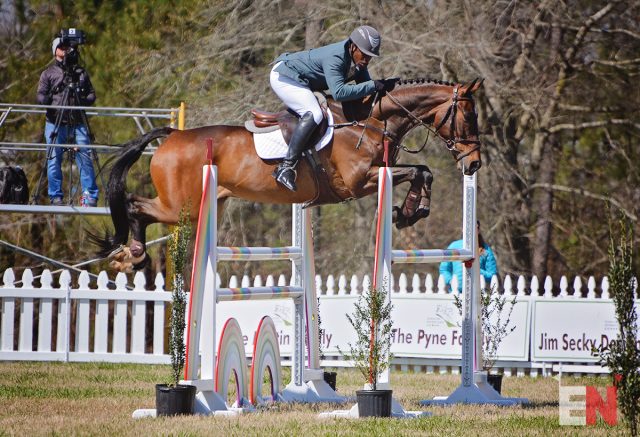 We sadly have to note that Lynn Symansky and Donner jumped a fantastic clear round but unfortunately missed fence 11 to result in a technical elimination. They will next compete at The Fork CIC3* before going on to Kentucky CCI4* for the ninth four-star of their storied partnership.

Looking ahead to tomorrow’s cross country, our top three all agreed Ian Stark’s track is a serious fitness test and time will be tight, as it always is here. Three of the last four runnings of the CIC3* have seen no more than three pairs make the time, and last year only the winners, Caroline Martin and The Apprentice, caught the time.

“There are a lot of ditches,” Kim noted. “I think it’s going to be a bit more of a fitness test than it has been in the past because we have that big pull up the hill backwards.” Click here for a fence-by-fence preview of the CIC3* course.

We have to send a massive thank you to the organizers, officials, volunteers and everyone who is working hard behind the scenes to make Carolina International the premier event of the spring season.

Lynn Symansky said it best: “It’s really nice as a rider to know they are doing everything they possibly can with your feedback every year. That’s why it’s such a huge event and the divisions are so big. They really do such a good job to make it the best event they possibly can.”

CIC3* cross country will stream live on EQSportsNet starting at 1:10 p.m. EST. Click here for information on how to access the live stream. Click here to catch up on all of EN’s coverage from Carolina International so far. Go Eventing.

This report has been updated with quotes from the top three riders. 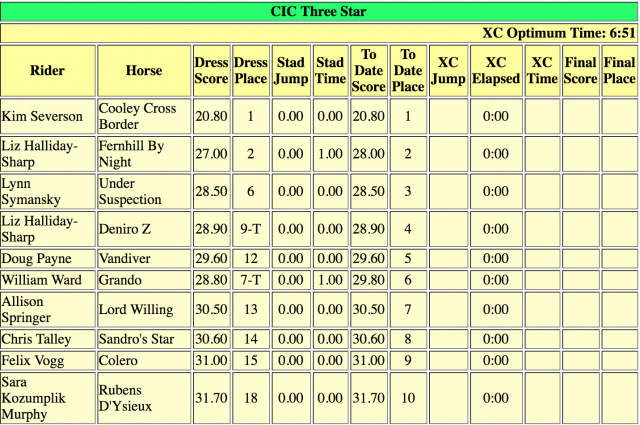