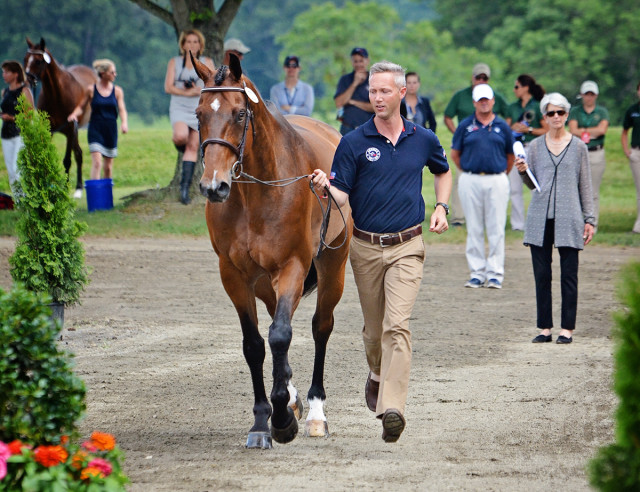 All horses passed the first inspection for the Nations Cup CIC3* on a very warm afternoon at the Land Rover Great Meadow International here in The Plains, Virginia. Though the forecast threatened to dump more rain, mirroring the downpour that rolled through the area earlier in the afternoon, only a few sprinkles fell as horses and riders took to the jog strip.

The 29 U.S. horses jogged first, followed by the sole Australian representatives Kate Chadderton and Collection Pass, then the Canadian and British teams. U.S. Olympic team member Fernhill Cubalawn was asked to jog a second time and then accepted, which was the most eventful development that happened during the inspection.

With temperatures hovering in the high 80s and the humidity pushing the real-feel temperature into the 90s, we saw everything from shorts to sun dresses on the jog strip. Temperatures are expected to cool slightly for Saturday and Sunday, but the competition is heating up for more reasons than one; it’s going to be a scorcher at this mandatory outing for the U.S. Olympic team.

Keep checking back for more photos from the first horse inspection, and also be sure to checking EN’s Facebook page for a photo album from the only and only Samantha Clark. Website guru Steve Symansky just posted the ride times for dressage at this link. Keep it locked on EN for much more from #GMI2016. Go Eventing.