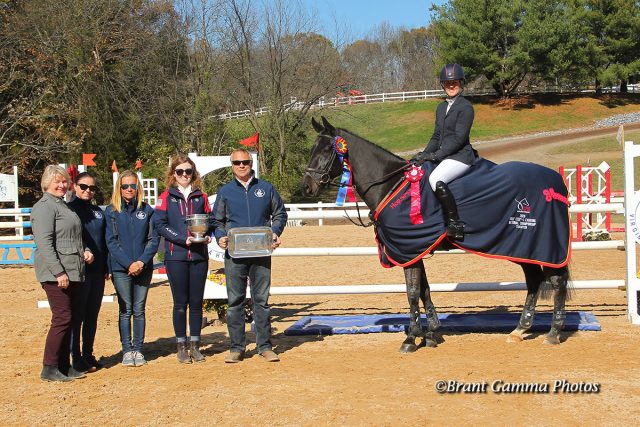 Australia’s Ryan Wood defended his title in the VHT International CCI2*-L, winning the A division for the second consecutive year with Ruby, a 10-year-old Oldenburg owned by Summit Sporthorses’ Ltd, Inc. They were tied for the lead through the first two phases and clinched the win with a fault-free show jumping round, finishing on 29.5.

“She warmed up super. I didn’t jump too many warm-up jumps because she felt fresh and was trying really hard, so I thought we’d keep it for the ring and it paid off,” Wood said. “I’m very proud to ride for [Ruby’s breeder] Ilona English. To breed a horse and get it to an international level is one thing but then to win is pretty awesome.” 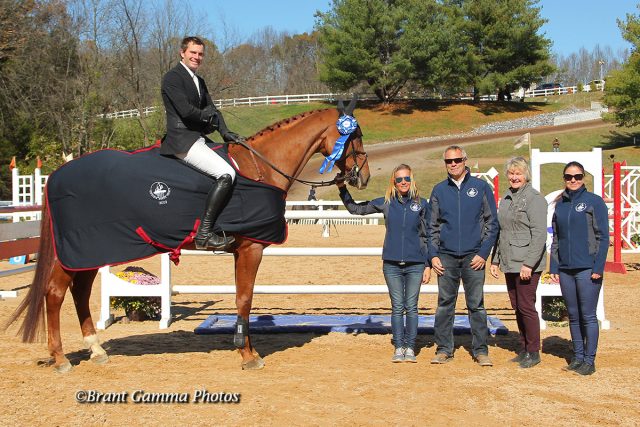 As the highest placed American in the CCI2*-LA, Allison Springer and Crystal Crescent Moon take home the USEF Two-Star Eventing National Championship and the Richard Collins Trophy. They scored a 30.0 in dressage and added no jumping or time penalties throughout the competition.

“He’s my little brown unicorn. He’s really fast and trainable. I think he’s going to do great things,” Springer said. “He was perfect in dressage. He’s like a little dirt bike cross country, and he put in a great show jump round. He’s very careful and scopey and just a fun horse to ride.”

The 6-year-old Connemara Cross is owned by his breeder, Nancy Winter. Springer has known Crystal Crescent Moon since he was a foal. He was started under saddle by Cathy Wieschhoff and partnered with Springer early in his 4-year-old year. Springer said, “It means a lot to me and it means a lot to Nancy because it’s so fun watching them come up and do their thing.” 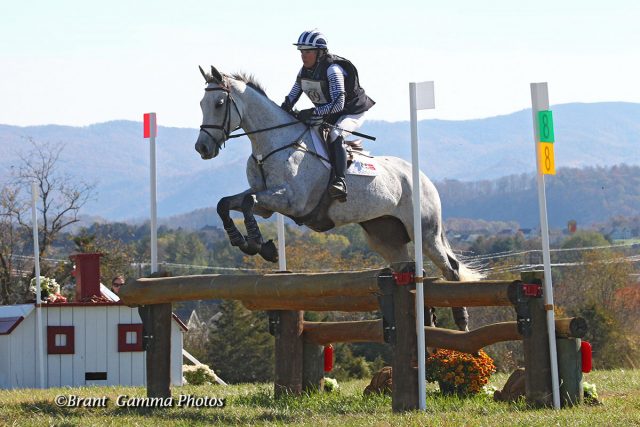 The Reserve Champion title went to Jan Byyny and Unbridled Numbers, a 9-year-old Thoroughbred owned by Kaylin Dines. They scored 30.1 in dressage and were double clear in both cross country and show jumping.

Francesca Spoltore and her 10-year-old Irish Sport Horse Millstreet Mitch won the CCI2*-LB division, the USEF Two-Star JR/YR Two-Star Eventing National Championship, and the Harry T. Peters Trophy. Leading the way after dressage, they dropped to second with 4.0 time penalties added across the country. In the final phase, the pair clinched the win with a double clear show jumping round.

“He was amazing jumping in there. He didn’t feel tired at all. He helped me out a little in one of the lines and he was so good today,” Spoltore said. “My plan when we bought him was to take him to the three-star short at NAYC next year. Hopefully we will bring him out at Prelim next year, move up to Intermediate and get my qualifiers for Young Riders.” 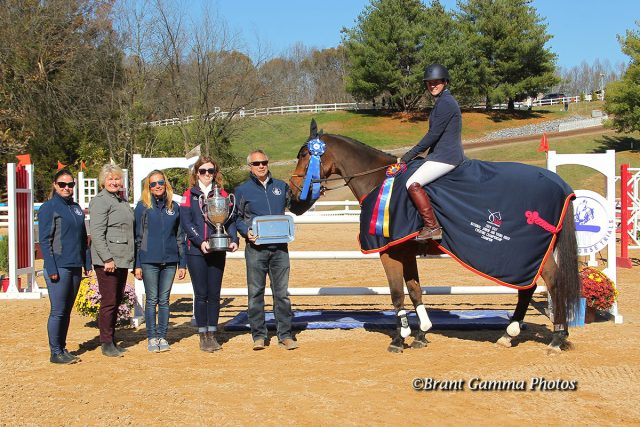 Spoltore has only been partnered with “Mitch” for four months and are still getting to know each other. “He was amazing this weekend. It was the best he’s been, the best we’ve been together. So for only four months, it was a good finish.”

Jackie LeMastus and Lup the Loop, an 11-year-old Irish Sport Horse owned by James LeMastus, moved up from seventh after dressage to finish second and take home the Reserve Champion title in the JR/YR Championship. 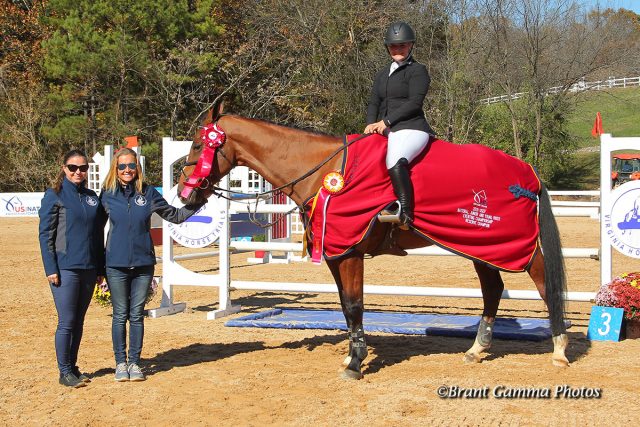 Woods Baughman and Masterel topped the CCI3*-L leaderboard from the start. The Chris Barnard-designed show jumping course saw no clear rounds in the division, but Baughman had some breathing room to take the win despite 8.0 penalties added to their score.

“Show jumping can be his weak point. Today it didn’t matter too much and we got lucky. It helped that we had a rail in hand going in. That took a lot of pressure off,” Baughman said of the 10-year-old Thoroughbred owned by Denis Glaccum and Sharon White. Baughman partnered up with Masterel at the beginning of the year.

Baughman was delighted with Masterel’s dressage test, which tied them for the lead with a 32.1. Of their double clear cross country Baughman said, “He’s so honest to the jumps. If he sees the flags he will jump.” 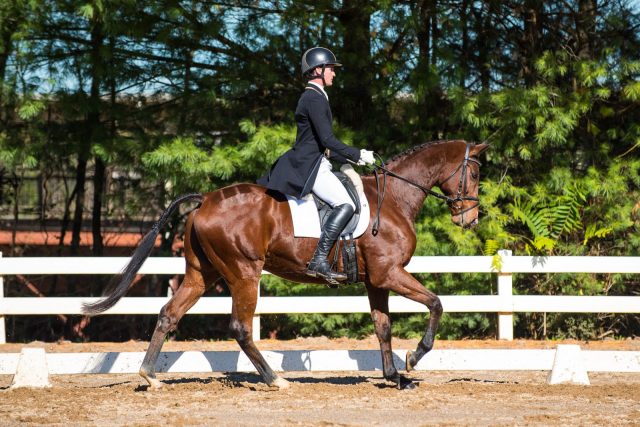 Mikki Kuchta and Special Reserve led the inaugural CCI1*-L for the first two phases of competition, but lowered two rails in show jumping, dropping them to second. Adding four faults to their final score and winning the class was Cassie Sanger and her 10-year-old Thoroughbred Born Ready. They moved up from second after dressage and cross country, finishing on 34.3.

“This is my first FEI and I’ve had ‘Red’ for about a year, so it’s exciting to win this,” said Sanger, who just turned 15. “It took me a while to get my rhythm going [on cross country] and I was a bit slow so I had to go quicker at the end. Today I was waiting to see a distance but after I had a rail I clicked in and kept riding forward.”

The CCI1*-L is the Modified (3’5”) level run under the international long format rules, with show jumping being the final phase run in reverse order of standing. VHT is currently the only event in the country to offer the CCI1*-L.

Of the division Sanger said, “It’s a great building block to get to the two-star and Prelim levels. It’s a great in-between.”

The winning team in the Intercollegiate & Alumni Team Challenge was the alumni team from University of Georgia and Fresno State. Cindy Phillips, Kim Keeton, and Kimberly Steinbuch won on a team score of 87.3. The University of Virginia Orange team took second, while Randolph-Macon College teams claimed both third and fourth place. View full team scores at this link.

“That concludes another incredible week at Virginia Horse Trials,” VHT Organizer Andy Bowles said. “Thanks to everyone for coming and enjoying this beautiful venue. We hope to see you back in the spring.”