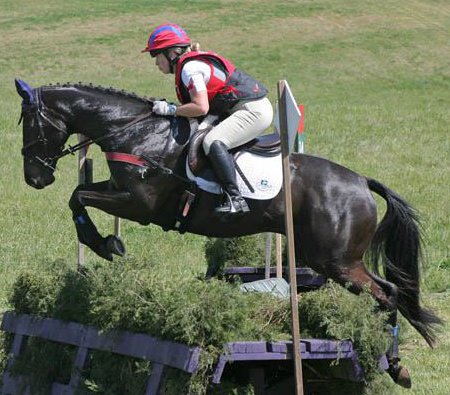 We’re sending good vibes to Amanda Tamminga after she suffered a nasty fall yesterday at the Loudon Hunt Pony Club Fall Horse Trials. Amanda and Codename Toby were running cross country in the open preliminary A division when Toby left out a stride before a big angled bench, hitting the fence and going down hard, likely landing on Amanda’s leg. She broke her right ankle and had surgery last night to repair the damage. While I don’t have any specific details on the surgery, Amanda’s friends on the COTH forums — where she’s known as “yellowbritches” — are reporting that she had metal rods and screws inserted during surgery and is facing long months of no riding while she recovers. Multiple vets attended to Toby, who is a bit banged up but otherwise fine. Please join the EN family in sending get-well-soon wishes to Amanda.

Tom Waters caught the fall on video, which you can view below (Note: There’s a big of language toward the end). He was kind enough to let me post it here to foster a discussion on a very controversial topic that crops up all too regularly in this sport: Should dogs be allowed at horse trials? As you’ll hear in the video, a dog — which belonged to the jump judge at the angled bench — started barking at Toby when he came out of the woods and approached the fence. Tom believes that Toby, who notoriously hates dogs, lost his concentration and remained distracted, which resulted in the botched approach and subsequent fall at the fence. We’ve had some heated discussions in the past about dogs at horse trials, and I think Amanda’s fall merits revisiting the subject. Weigh in, EN. Is it simply too dangerous to allow dogs at horse trials?

Many thanks to Tom Waters for this video footage.

Update: Amanda Tamminga submitted her own thoughts in the comments thread for this post over on EN’s Facebook page. You can weigh in on the discussion using the link above.

From Amanda: “Since I was sitting on the horse, I can assure you he lost his focus or a beat or two. I don’t think the dog is the SOLE REASON we fell (and the video and ride has been dissected multiple times), but I do know he heard the dog and lost his focus. I know my horse, and I know how he thinks. He hates barking dogs. Always has. It definitely didn’t help. All that being said, my dog was tied up to the trailer. I’m not against dogs at a show, but I have never been a fan of them being with jump judges. I’ve known of dogs getting loose from their jump judge owner, among other issues. And, as others pointed out, the judge is a little unfocused if a rider does have issues …”