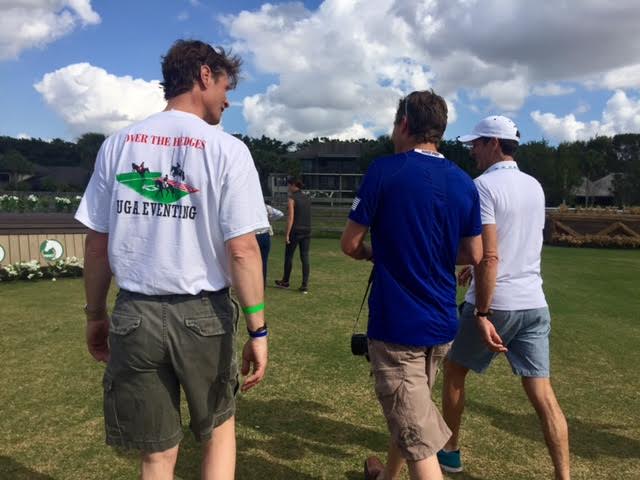 Walking in the footsteps of eventing giants. Photo by Brooke Schafer.

Wow. I uttered that word about one thousand times over this past weekend. Everywhere I looked, there was an upper rider, a four-star horse, or a breathtaking view as far as the eye could see.

This past weekend, eventers descended on Wellington for the $100,000 Wellington Eventing Showcase — which is only in its third year running. I arrived early on the morning of dressage and watched in awe as Boyd Martin, William Fox-Pitt, and Mark Todd were working quietly in the covered arena.

The grounds were quiet. Unlike Rolex, there were no crowds of people or ropes keeping me at bay. I was able to rest against the arena railing and watch (with my jaw hanging down to my ankles) as some of the best upper level riders in the world worked their horses effortlessly around the arena. Welcome Shadow looked in top form. William Fox-Pitt would occasionally ask Boyd’s advice about Steady Eddie (whom WFP was catch riding for the Showcase and is typically Boyd’s ride). 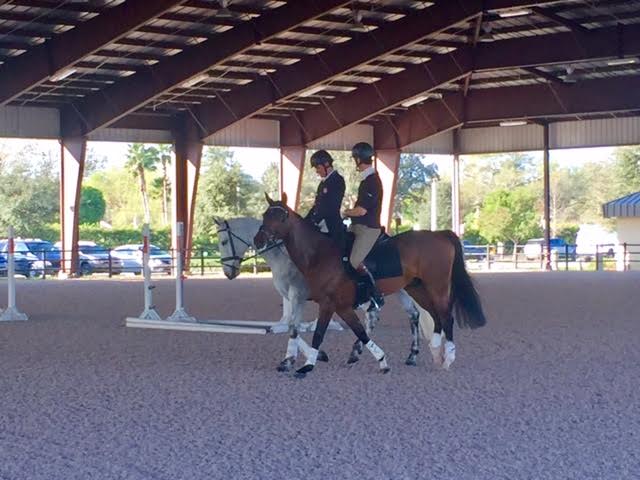 Boyd and William Fox-Pitt riding together before Boyd’s dressage. Photo by Brooke Schafer.

I wandered around the perfectly manicured grounds and was simply amazed by the attention to detail in both the facilities and the grounds. No blade of grass was out of place. Wonderful shopping and informational booths surrounded the facility.

When dressage started, there was a variety of popular music in the background of each rider’s test (which was great for non horsey-spectators!). I was able to stand right on the rail near the in-gate, catching glimpses of each rider and horse up close as they came ready to demonstrate their dressage skills and earn their piece of the $100,000. 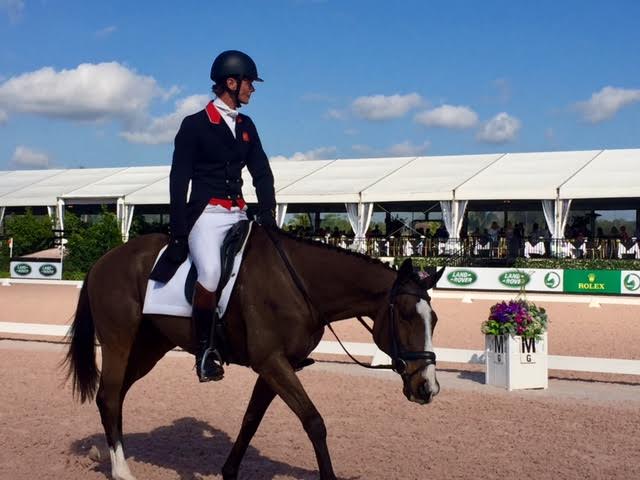 The riders casually sat in the grandstands and were very accessible to the public. They seemed happy to answer questions from passers-by and everyone was in a great mood (how could you not be in 80 degrees in February?!). The warm-up rings were home to the riders, horses, grooms and coaches. I leaned on the rail and soaked in the information being handed out in last minute preparation. It was like auditing a clinic with all of the top riders in the world.

That afternoon, I attended a free and open to the public course walk held with Boyd Martin, William Fox-Pitt, and Mark Todd. The riders jokingly teased each other throughout the walk and gave insight into their approaches to each fence. Between fences, they would speak to each other, bouncing ideas of different approaches, striding, etc. It was an incredible opportunity to walk in the steps of Olympians out on one of the most beautiful cross country courses I’ve ever seen, even if it was a bit untraditional. At one challenging combination, Boyd joked to the crowd saying, “I’m glad I’m not riding William’s horse!” (which of course is Boyd Martin’s usual mount, Steady Eddie). 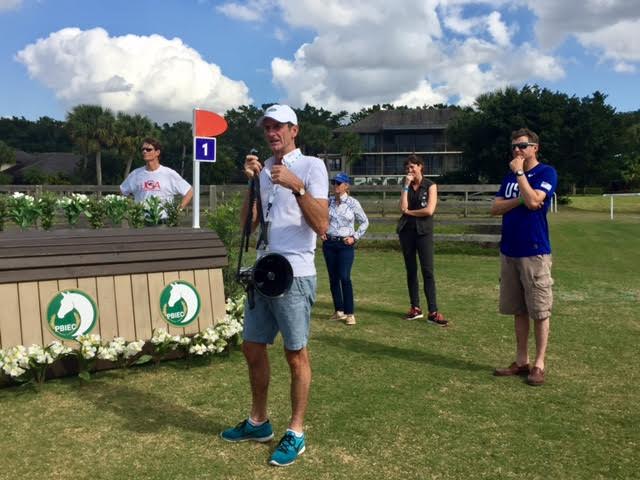 On show jumping/cross country day, I arrived early and was pleased to find a very quiet show grounds. I again leaned on the arena railing and watched as Boyd Martin gave William Fox-Pitt another “lesson” on Steady Eddie. Everyone was in good spirits with show jumping set to start later in the morning. I wandered over to show jumping and watched as the top eventers walked their show jumping course. The course was a beautiful array of colors and decorations, with some of the riders remarking on the difficulty of the course.

Show jumping started at 10:30 a.m. and the stands filled up with spectators. Many were not eventers but were local equestrians, who came to see what the sport was all about. I spoke with several people who either rode dressage or hunter/jumpers and they were expressed the thrill they had in being able to see the eventers. “We don’t usually get to see anything like this,” they said.

Non-horsey fans also filled the stands, just happy to see the competition. Riders came up to find a seat and watch as fellow competitors navigated the course, watching to see how many strides or the lines they chose to take. 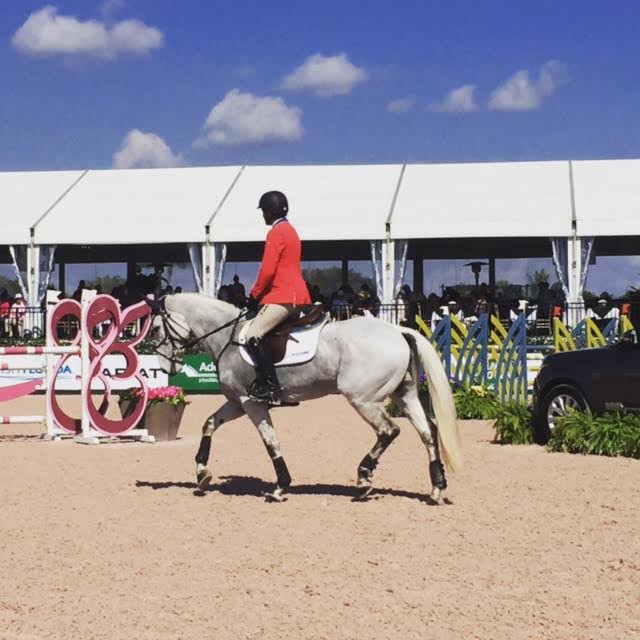 Boyd and Welcome Shadow trot into the ring. Photo by Brooke Schafer.

Cross country started at 1 p.m. By that point, the heat of the sun had set in and the temperature reached near 80 degrees. The cross country course was stunning on golf-course like polo grounds and appeared to look like a “go-kart race” as Boyd jokingly said (meaning that it would be quick and twisty without the long galloping hills as they traditionally encounter).

I stood at the start box (which was an arms-length from the competitors) and was able to watch each rider prep and count down to the start. From that point, I could see the majority of the course, which ran about four minutes long. Again, the grounds were filled with local horse lovers, all excited to see what eventing was all about. 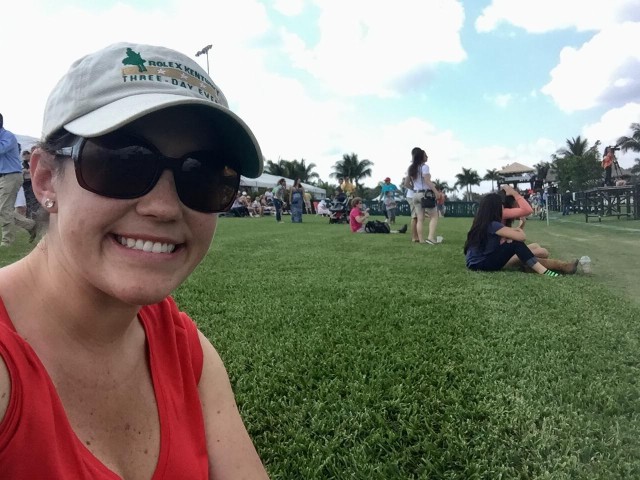 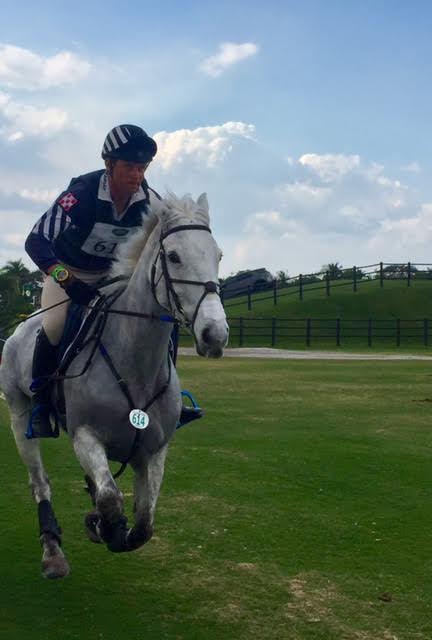 Boyd and Welcome Shadow galloping from the start box. Photo by Brooke Schafer.

At the end of cross country, Boyd proved to be the winner, for the third year in a row. A ribbon ceremony was held at the end and the public was invited to witness and gather around the riders as the received their placings. Boyd Martin stood at the top of the podium in first, Buck Davidson to his left in second, and Doug Payne to Boyd’s right in third.

Each rider was given a bottle of champagne, which they quickly opened and sprayed on each other. Following that, Buck, Doug, and William Fox-Pitt scooped up Boyd and swung him over to drop him in the water complex (Boyd pleaded and they put him down, but it was a great tease!). Photos were taken and checks were collected. Spectators filtered out and the riders returned to the barns to pack and head back to their winter homes. 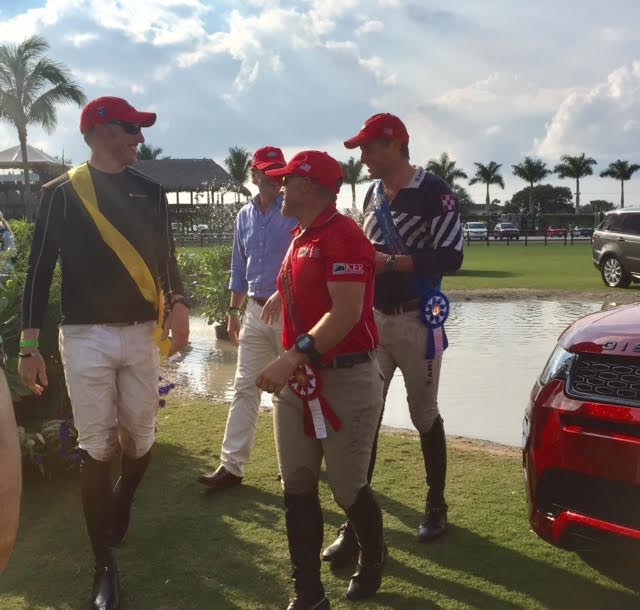 The winners ready to return home. Photo by Brooke Schafer.

Going to Wellington for the first time during the Eventing Showcase was a magical experience — one I will never forget. While I usually attend Rolex Kentucky each year and often groom for one of the riders (which is amazing in itself!), this was a much different experience and one I will return for each year. I hope to see more of my fellow eventers make the trip next year!