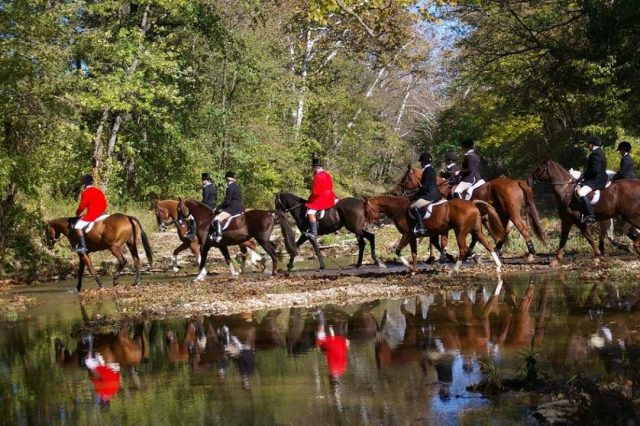 It all started with an eventing student of mine who got into fox hunting, and a client OTTB. I went fox hunting.

I have been a hunter jumper for over 26 years and an event rider for many of those. In spite of adoring photos of the riders in scarlet coats on a crisp morning surrounded by hounds, I had never actually joined a hunt. “Don’t embarrass me,” whispered Rebecca as we rode up on our horses to the gathering area before they released the hounds at Bridlespur Hunt Club in Eolia, Missouri. Embarrass her? What could I possibly do? Literally 5 seconds later it happened. But let’s back up a moment and talk about what fox hunting entails. 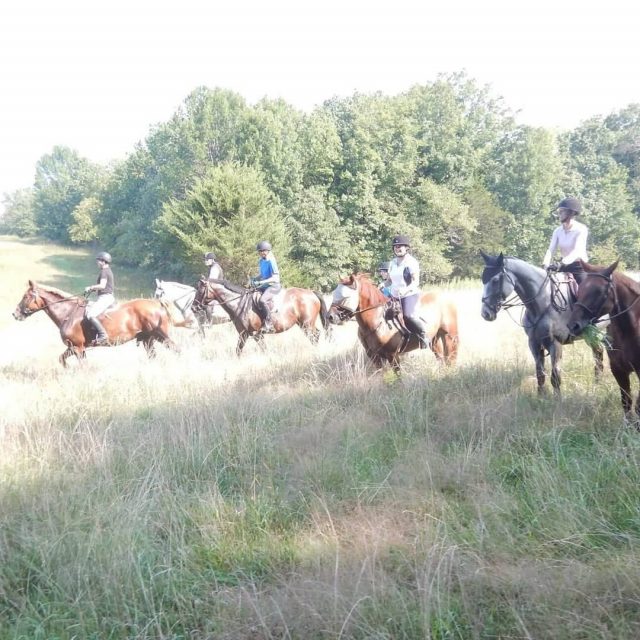 Amy Nelson (on the grey) with Hummingbird’s River. Roading at Bridlespur Hunt Club.

It is sort of what it sounds like. Although these days you don’t actually “hunt” a fox … it’s more of a chase. Generally the hounds will catch the scent of a fox (or in our region of the U.S. more likely a coyote) and the run begins. It is never the intent to harm the animal. It appears in my non-expert opinion that the fox/coyote is quite fast and intelligent, and more often than not will give the pack of hounds the slip rather easily.  Fox hunting is simply noisy hounds and a super fast-paced hack, over terrain with logs, stone walls and coops built in. 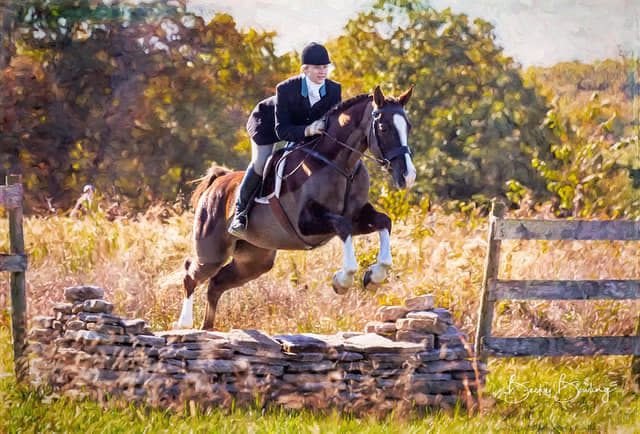 At Bridlespur Hunt Club they share portions of their land with an open to the public Nature Preserve, available to bird watchers and hikers. The terrain varies from rolling hills next to corn and soybean fields, to wooded areas and flowing shallow creek crossings. There are several “seasons” for the sport and several “levels.” And at most clubs you don’t have to be a member to try it out a couple of times. They offer a “capping fee” (something like $25) to join the hunt as a guest.

The “levels” are 3rd flight — mainly walk/trot, back away from the hounds a bit. The leader of this flight tries to take short cuts through the land so you see the action without being in the galloping field of madness. No jumps, or optional jumps like small logs/coops at the very end. Second flight — more of a canter pace behind 1st, seeing more action, again jumps appear to be optional here. First flight — right up with the hounds, galloping terrain, jumping up to 3′ or so, crazy people and booze. 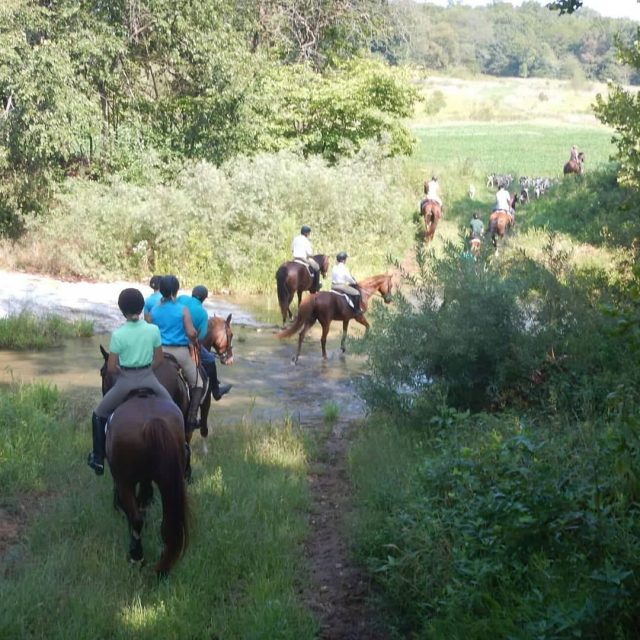 The seasons are Roading — generally August, puppies and older hounds who no longer can keep up with the hunt get to go along in this season.  It gives these young hounds a chance to get familiar with the whole ordeal before the real hunts begin. I had immense fun with roading, as there is no greater joy than watching an elderly hound feeling important as though he still had a job. One particular hound stayed all the way in the back with us at a slow trot during one of these rides, feeling proud of himself, with the speed his legs could maintain at his age. Is he smiling?   Green horses and newer riders are encouraged to come out during these rides as well, to introduce the horses to the chaos on a smaller scale. The puppies are a bit less intimidating with their floppy ears and drooly enthusiasm. You should attend for the cuteness alone. Roading is casual with polo shirts and tan breeches. Some even allow western tack for trail ride days, but check with the club in advance.  Some have Hunter Paces and even the elusive Mushroom Hunt — an expert on finding edible mushrooms leads a ride. 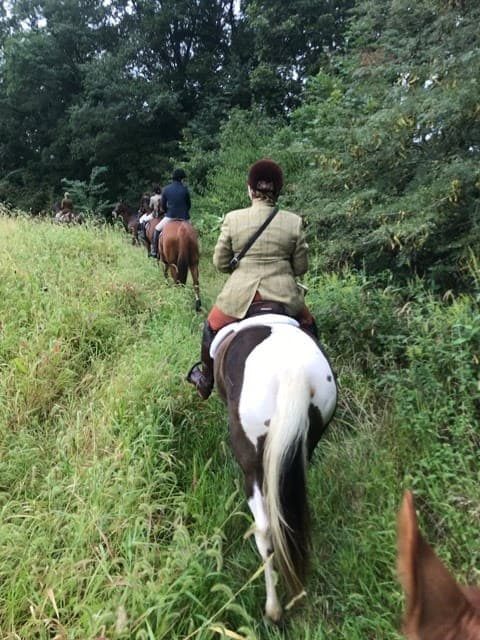 Informal hunts fall in September up until Opening Hunt in October. Tweed coat, ratcatcher and stock tie (apparently they prefer an actual tie, but were OK with my pre-tied tie from eventing). Brown gloves. Hair net and velvet helmet. On warmer days they wave coats for a vest, but as an eventer plan on wearing your summer hunt coat if you don’t own a vest. Formal hunts begin on opening day, and require a black hunt coat, brown gloves, stock tie.  The scarlet coats are reserved for gentlemen and ladies of the staff who have been awarded colors. Read all about the attire here. 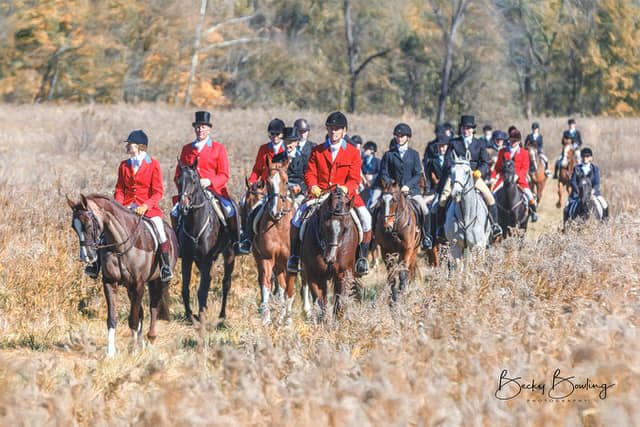 There are a few things you should know before you go fox hunting. Definitely read that your local club’s website for rules and information. Ask questions. This group of people is very open to helping you out and making sure you understand the protocol of tack, clothing, talking, and vocabulary.

So how did I embarrass my student?? For the love of all that’s holy do NOT call them beagles. In my defense they look like beagles but they are definitely not. They are much taller and larger because your average beagle would NOT be able to keep up with a galloping horse. Ok. Sounds stupid now … but the hunt is 2.5 hours away and we got up at 3:30 a.m. I don’t even get up that early for eventing! They are fox hounds. Google this. You’ll see the difference. Also … do NOT call them dogs. They are hounds. Fox hunters are polite folks so they won’t openly correct you, but you’ll likely get a tongue-lashing on the drive home from your student, and perhaps a bit of gossiping during snacks and drinks in the clubhouse after the hunt.

Learn terms like “Tally-ho,” “Huntsman” and “Whip” before you go.  Tally-ho is a good thing, apparently. And study up on attire. Just like you wouldn’t go into a dressage test with bell boots and pink saddle pad, fox hunters take their tack and attire choices seriously.

I would highly recommend the experience for eventers, especially those in regions where the event season only runs a few short months. Fox hunting will allow you to get out over terrain with your event in horse in the winter months, and weather-depending, pop over a few jumps in the off season! This particular hunt allows members to use their land on non-hunt days for schooling and riding as well. Or go on hunt days — your horse does not have to be brave over terrain when 30 horses just crossed the moving creek (quite shallow, like a water complex, at Bridlespur) in front of him … he will absolutely cross without question. 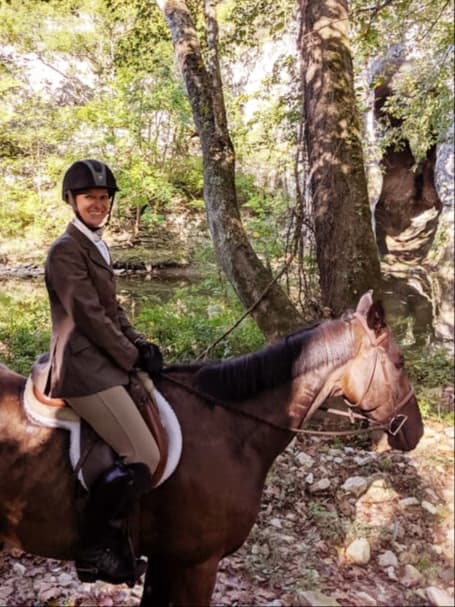 It may seem a little daunting at first, but trust me, the leaders of each flight look out for all the members of their group. If you struggle or have a question or need help (say the green horse you are on gets a bit nervous), they are like the mother hen and will take you under their wing to make sure you are safe and having a great time.  I stuck to third flight and had a blast.

Cost-wise to join a club it might run as much as 3-4 horse trials, but you get the entire year as a member.  They may have a young rider (under the age of 25 for some!) or new member discount for your first year, and some offer a trainer option (of any discipline) with the idea that you’ll bring students with you to try it out and help drive membership. Oh. And there are snacks.

If you’re in an a region with a short event season, check out your local fox hunting club. You might just love it! Fox hunting is basically just the cross country portion with dogs … er… hounds. And absolutely NO dressage.  Coming up on October 20th Bridlespur Hunt Club in Eolia, Missouri has the opening day hunt and blessing of the hounds. If you don’t ride in it … it’s worth coming to watch! 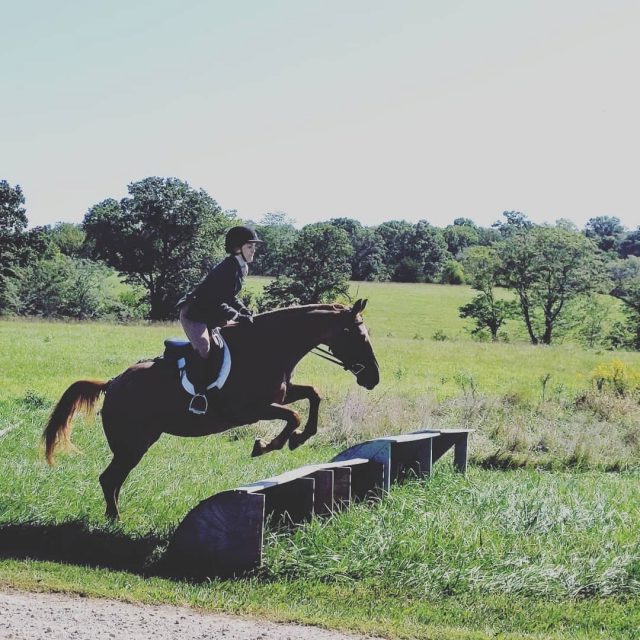 Informal Hunt.Rebecca Mason & Holly (the student I embarrassed by calling them beagles).