“We’re proud to have two – Andrea Baxter and Indy 500 – of our very own San Luis Obipso County residents doing so well in international competition on foreign soil,” says Sharon Jantzen, director of SLO Horse News. Sharon recently penned this wonderful feature on Andrea and Indy’s second trip to the Land Rover Burghley Horse Trials (Aug. 30-Sept. 2, 2018), where the pair redeemed themselves from an unlucky cross country moment the year prior. SLO Horse generously granted EN permission to republish the feature — please show them some love and keep up with all the latest San Luis Obipso County equestrian news with a social media follow! You can find SLO Horse News on Facebook, Twitter, Instagram and Pinterest. Many thanks also to Julia Shearwood Equestrian Photography for the lovely photos! 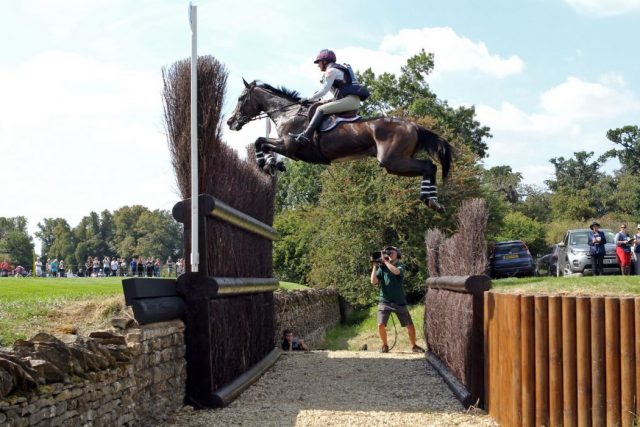 “I walked the cross country course and took a huge sigh of relief,” expresses Andrea Baxter remembering her first walk of this year’s Land Rover Burghley Horse Trials cross country course, considered to be among the most grueling courses in the world. Andrea and her California-bred Thoroughbred mare — who both reside at Twin Rivers Horse Park in San Miguel, California — had headed across the pond to England to redeem last year’s trip to the prestigious fall four-star in Stamford, England.

Andrea had her redemption plan in motion. Of last year, she relates she was a bit overwhelmed by the shear size of the obstacles, which distracted her from focusing on the details needed to execute the course. As a result, she parted ways (in a simple dismount) with her horse on cross country. This year she came ready to focus on the task at hand and not make a “silly” mistake. The first order of business was to start higher on the leaderboard after dressage. 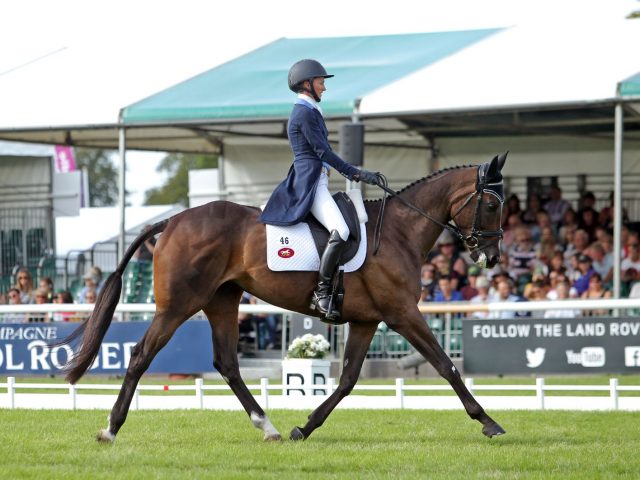 Redemption Plan #1 – Dressage Test Was the Best Yet

“I was more clear minded this year,” Andrea reports. “I did a better job with my homework because I had a better understanding of what I was getting myself into.”

She focused on improving her accuracy with Indy along with creating a more uphill balance for dressage: “I worked on making Indy more rideable in dressage and more precise over fences.” Her dressage work paid off as Andrea and Indy put in their best dressage test yet, placing her higher on the leaderboard going into cross country. 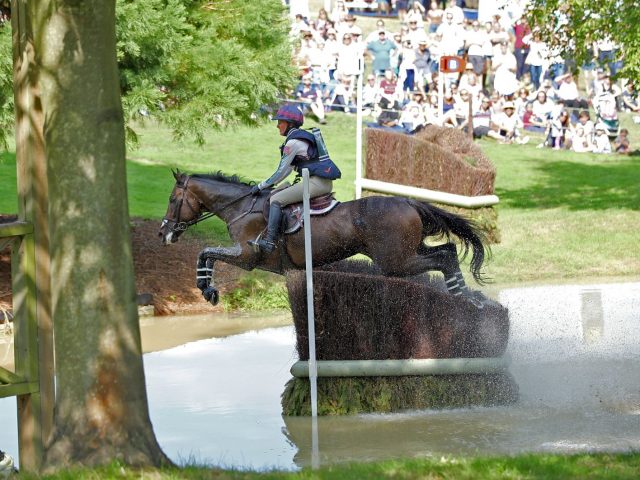 Andrea Baxter and Indy 500 splash out of the water at Burghley. Photo by Julia Shearwood Equestrian Photography.

Redemption Plan #2 – Get Around the Cross Country Course

“I can do this,” Andrea thought to herself regarding her first look at the tough cross country course. That thought was immediately followed by nerves because, “Oh wow, now I need to go do it!” Yes, tackling one of the biggest courses in the world was now on Andrea’s to-do list.

“The cross country fences were indeed huge but everything was doable for my horse,” Andrea says, explaining, “Most of the technical things were early to midway through the course, and then the last half was a huge scope and fitness test as the course was all uphill at the end and with massive jumping efforts. Although many of the top riders were expressing concerns for the difficulty of this year’s course, I felt that it suited Indy and I much better than last year. Last year was almost just a dream to be there and giving it a try, but I put the pressure on myself this year as I knew Indy and I could do it and we needed to go out there and prove it!”

Even with the big fences later this year, Andrea tells us, “Indy was jumping great to the end. She had to try harder throughout this course than at any other event we’ve ridden. I was thankful for her being a Thoroughbred which aided her endurance.” 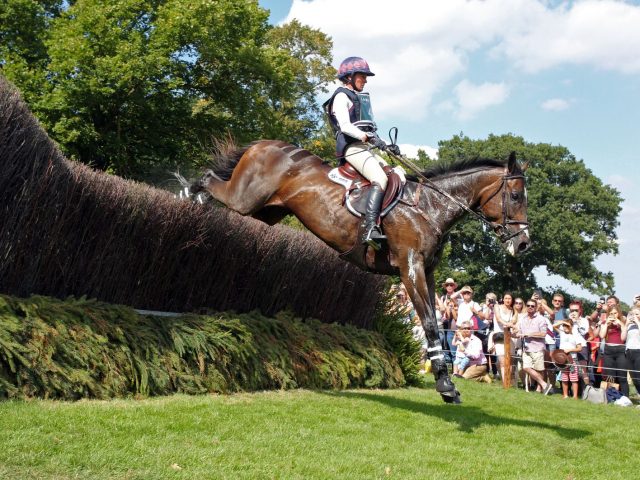 Although Indy tackled all the cross country fences with ease, she did have one run out at The Leaf Pit #7 C.

Andrea explains the details of the option at The Leaf Pit: “The combination was a massive bank drop of about 7’ straight down a huge steep hill, with about six strides to two skinny chevron jumps on two straight strides. The option allowed you to jump a house at the edge of the steep hill in six strides on a slightly curved line down the same steep hill to the same two skinnies but on a three stride line on a slight angle. There were pros and cons to both lines, but the option was deemed slightly safer but ironically at the end of the day, the option caused the most trouble on the course and the straight route ended up riding the best for most riders.

“I walked the course with several people more experienced than me, and they were all on the fence about going the straight route or not. The iconic Leaf Pit has a history of causing lots of trouble and this year looked to be quite tough and was placed very early on in the course. I studied and walked that combo the most and had decided I’d go the straight way. But after I watched the first several top riders go and they opted for the option, I decided I shouldn’t try to be a hero and should probably take the option too.

“Unfortunately, I probably wasn’t as focused on that line and was just a hair off of it, hence the run-out at the last element. My gut feeling was to go the straight route, but I kind of got talked into the option at the last minute. But who knows, hindsight is so easy, maybe I would of had trouble with that line too!? In any case, it gives me some homework for next season for sure.” 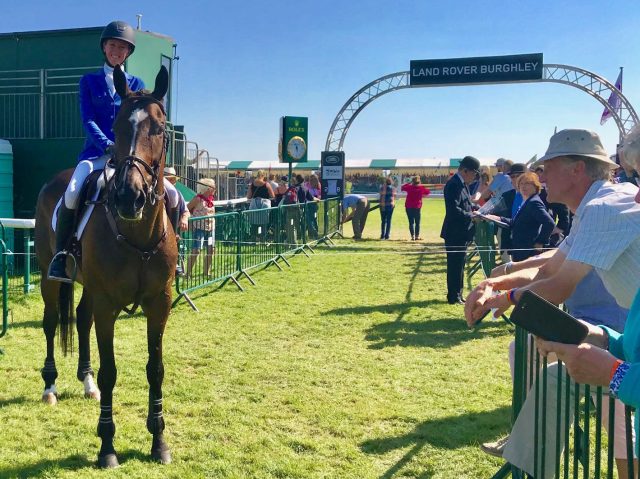 In the queue for Burghley show jumping. Photo courtesy of Andrea Baxter.

Last year Andrea and Indy were hacking around the grounds on show jumping day. Not so this year; they were in the queue to ride and finish the event. Indy pulled two rails in the stadium phase, but they still moved up and finished the event in 36th place as the second highest U.S. pair out of 85 international starters.

“Indy is usually more careful, but after the huge brush fences on cross country she learned to brush through them to save energy,” explains Andrea. “So it made her a little more aggressive in stadium jumping.”

Andrea explains this further: “Most event horses learn to brush through the brush earlier in their careers but Indy has always been adamant to clear the whole jump. Burghley was the first course she met that she finally had to give in and brush through. I think that made her a little less careful on Sunday than I expected. She felt very sound and fit so I think the rails were more to do with her ego the day after conquering the world.”

A Different Game Plan This Year

Familiarity played a key role for Andrea this year, making it easier for her to focus on the job at hand. Last year she found herself stopping and thinking, “This is real.” This year she had a better understanding for what she was up against. She also came with a horse ready to tackle the tough course.

Endurance plays a key role in event success so conditioning is vital. Since there are not many long hills in San Miguel, Andrea hauls Indy down to a friend’s place in Lompoc (two hours away, one-way) to do her conditioning on hills. “It really paid off. I was glad to have so much horse left at the end of cross country,” Andrea related. “Those conditioning days are very long and tedious. They make it hard to focus on your horses and students in training back home. But luckily all those long days paid off!” 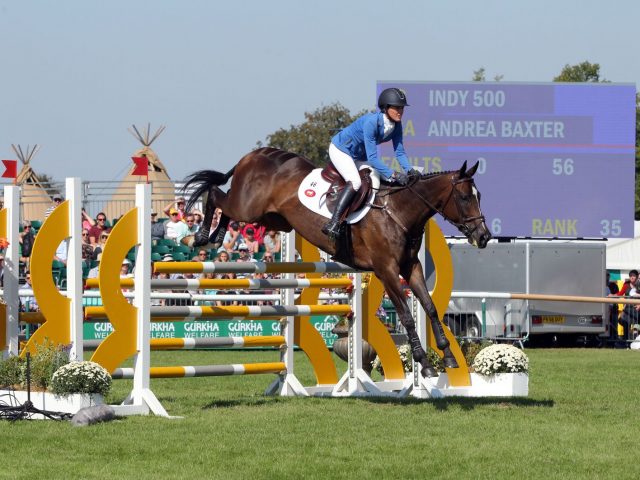 As Indy has started to travel more in unfamiliar types of transport, it has become evident that she’s quite claustrophobic. She had a very rough trip to Kentucky this spring so Andrea planned to take every precaution she could on this trip to Europe.

“Our direct flight from LAX to Amsterdam, followed by a 15 hour drive, landed us at our stop-over-spot about 10 days prior to the show. As a result, we arrived much earlier this year as we realized the traveling last year was hard on Indy,” says Andrea.

This year Indy didn’t lose as much weight, and she arrived safe and ready to compete. Indy wore a protective padded sheet, made by Andrea, to keep her from getting scraped up, which she’s prone to do, should she tousle herself around in transit. “She’s claustrophobic,” Andrea states with understanding, “and does not do well in small spaces.” A larger (more expensive) stall was arranged for both the arrival trip and the return home. Indy returned home sound, happy and healthy. 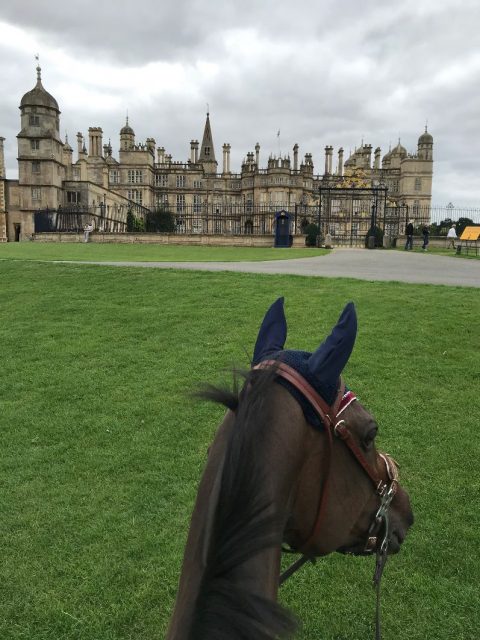 Over the ears view of the Burghley Estate. Photo courtesy of Andrea Baxter.

Andrea and Indy Have Their Eye on the Future

With two Land Rover Kentucky Three Day Event trips  and two Land Rover Burghley excursions under their belt, Andrea and Indy have their sights on returning to England and competing in the Mitsubishi Motors Badminton Horse Trials in 2019. Badminton is held earlier in the year, May 1-5, so there are not as many competitions to use as prep events in the spring. Andrea will aim to do the three-star at Galway in Temecula, California, and a few clinics and/or jumper shows as part of her Badminton preparation.

Indy is currently enjoying a well-earned vacation and taking her time off in stride. “She was sad to be left behind when we left for a recent competition!” says Andrea of Indy’s attitude while on vacation.

“The people I met. Many of them were my idols; now I can call them my friends,” says Andrea regarding her favorite memory of this year’s Burghley experience. She and the Americans were stabled with the Kiwis which enabled her to get to know most of them and experience this top-level competition alongside them.

“I also have established a lot more contacts in England,” Andrea says. She is also happy to share her experience with others who may be looking to take a leap across the pond and go ride with a different crowd on foreign soil. “A lot of my friends have up-and-coming horses and I can help them so they don’t have to learn things the hard way.”

Bonus! A video interview with Andrea presented by her sponsor Riding Warehouse: