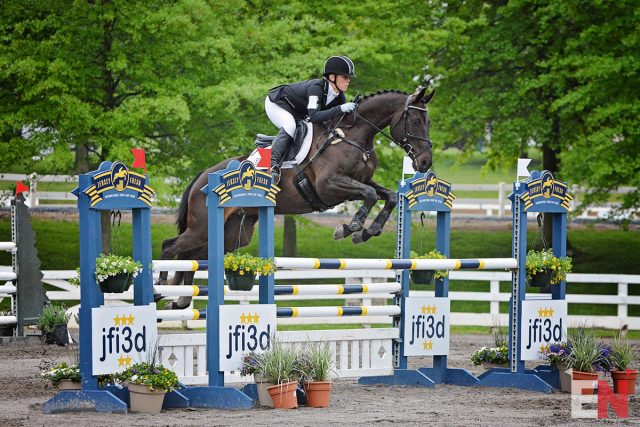 Anna and Loschiavo and Prince Renan. Photo by Jenni Autry.

Anna Loschiavo clinched the first international win of her career today at the Jersey Fresh International Three-Day Event, piloting Gina and Rodney Oakes’ Prince Renan to a stylish clear over Chris Barnard’s show jumping course to win the CIC2* on 29.7.

“I could not be happier with him. He just tried his heart out for me out there. He has been jumping in the best form, and show jumping was quite a bit of a struggle coming up. He’s very athletic, but I think he didn’t really know it in the beginning,” Anna said.

“That was a double clear because he wanted it to be a double clear, and he made every last effort to make sure he didn’t touch anything. It was a neat feeling to have underneath me. I’ve known him for so long, so it’s even cooler when you have been with them so long and feel them do that for you.”

Anna has been partnered with Prince Renan, a 15-year-old Thoroughbred/Holsteiner (Rodin X Fly Right By, by Niosk), for 10 years, producing him all the way up from Novice level.

“He’s a very spooky horse, so I think half of it was time and maturing. … Over the last year I’ve been working with David O’Connor, and he’s really just finessed our show jumping and I think phenomenally helped me with Renan to get the finishing pieces to it,” Anna said.

“We’re definitely getting there, but it’s come a long way in the last year for sure. I just feel very confident when I go in the arena. We’ve pulled off double clears before, but I would leave the arena going, ‘I’m not sure how that happened.’ Now I feel like I can canter in and really trust him and he trusts me and have a little bit of fun for 85 seconds.”

Prince Renan has already run two CCI2* competitions, so instead of tackling the CCI2* at Bromont he will go around the CIC2* instead in preparation for Anna’s ultimate goal of an eventual move up to the Advanced level. 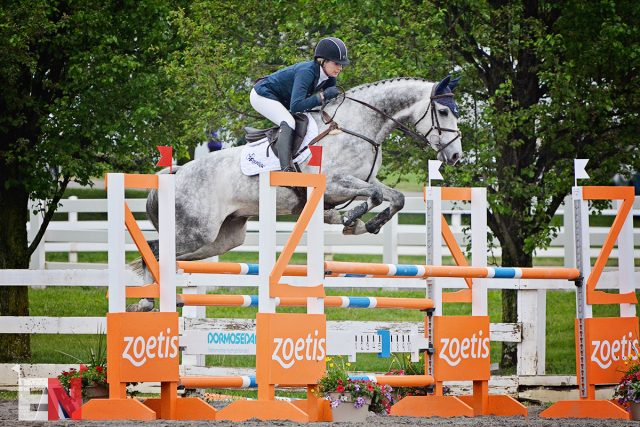 Holly Payne-Caravella and CharmKing, a 7-year-old Holsteiner (Cassito X O-Heraldika, by Heraldik) owned by CharmKing LLC, delivered a clear show jumping round in the CIC2* to finish in second place on their dressage score of 30.0.

Scores were very tightly bunched heading into show jumping, with one rail separating the top 12 after cross country. Tightly bunched scores will be the new normal at FEI competitions following the removal of the dressage coefficient, and Holly said she definitely felt that extra pressure today.

“My horse is a phenomenal jumper, but he’s still pretty young and inexperienced, and as he’s gotten fitter he’s gotten a bit wild,” Holly said.

“I was really pleased with him today because he actually was feeling frisky but listened and stayed with me and jumped amazing. He jumped me out of the tack a couple of times, but I’ll take it if he jumps clean. He was a lot more rideable even though he had a lot of energy in there.”

CharmKing will next head to Bromont to contest his first CCI2* alongside his stablemate Bruisyard Hall, who finished 19th in the beefy CIC2* division, which boasted 57 starters. 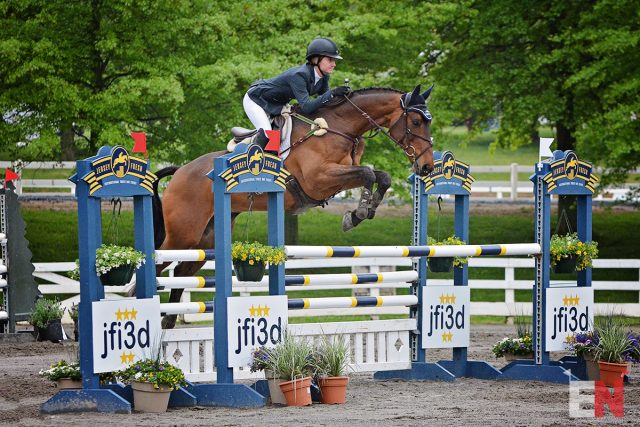 Alexa Lapp jumped a beautiful round aboard Tim and Nina Gardner’s Cambalda, a 16-year-old Irish Sport Horse (Balda Beau X Cathy’s Lady), to finish in third place on 30.1 in her first CIC2*.

As Jennie Brannigan’s longtime working student and groom, Alex had ridden “Ping” many times for trot sets and hacks over the years, but this year she got the opportunity to compete him.

“Jennie had a really consistent show jumping record (with Ping). Everybody knows he jumps clean, but I’m not Jennie,” Alexa said. “At a little bit of a lower level he doesn’t try as hard as at the three-star level, so he was touching a couple of things, but he knows just how much he has to jump to jump clean.”

Alexa said riding such an experienced campaigner has been extremely confidence-building for her, and she is now gearing up to tackle another big challenge with Ping at the FEI North American Youth Championships. Ping will enjoy a break before gearing up to head to Rebecca Farm for Young Riders.

Will Faudree and Jennifer Mosing’s Caeleste, an 11-year-old Holsteiner mare (Contender X Happygolucky, by Lucky Lionell), delivered a clear show jumping round to finish fourth on 30.5.

Will Coleman and Soupcon de Brunet, a 12-year-old Anglo Arabian (Zandor Z X Bikadine, by Nouredine du Lirac) owned by The Conair Syndicate, also jumped clear to round out the top five on a final score of 30.8.

Twenty-six of 51 pairs jumped clear rounds inside the time over Chris Barnard’s CIC2* show jumping course to give us a 51% clear rate in the division. Click here to view final scores in the CIC2*.

We had a very long, rainy, cold day at Jersey Fresh to wrap up the competition and have only just concluded the final press conference. Please bear with the chinchillas as they scramble to bring you a final report from the other divisions. Spoiler alert: Boyd Martin won them all.

Click here to catch up on all of EN’s coverage from #JFI3DE. Go Eventing. 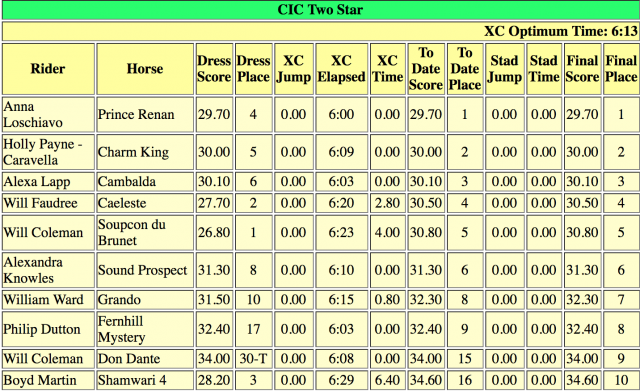