Poplar Place Farm in Hamilton, Georgia once again hosted the Area III Championships this weekend. Donna and Gary Stegman welcomed Beginner Novice through Intermediate competitors in both the horse trials and championships as well as a Starter division.

McKena Knott and Flanigan led the Intermediate horse trials from the start, adding only cross country time penalties to their score. Lydia Kennedy and Double Dare finished second, which was their first Intermediate completion. Congrats! 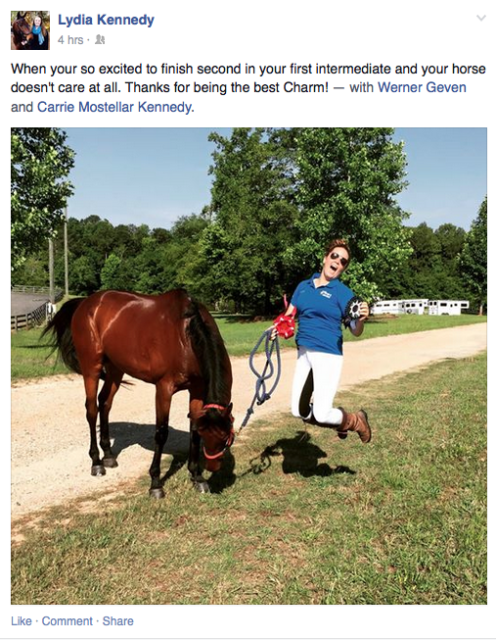 Jennie Jarnstrom (SWE) and Penelope scored a 25.2 in the Intermediate Championships dressage and held on to their lead, adding 6:36 time penalties to their score and finishing nearly 12 points ahead of second place Lesley Grant-Law (CAN) and What Law.

We are delighted to see Jonathan Holling back on form after breaking his leg while schooling cross country in March. His first event back was the CHC International in March, where he rode Kildalton Cooley to a 15th place finish in the CIC2*. This weekend the Irish Sport Horse gelding placed third in Intermediate Championships. 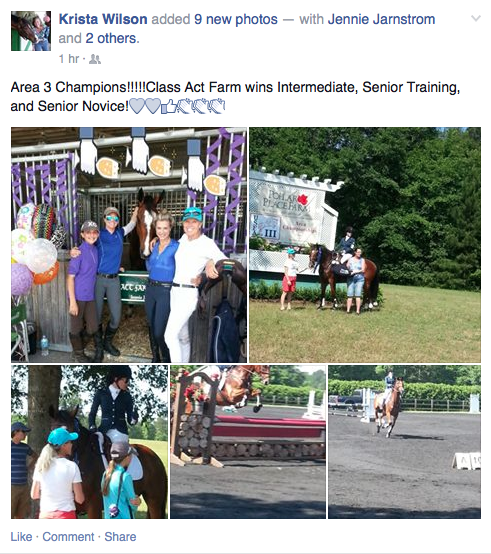 Leslie Law had a very good showing at the Preliminary level at Poplar. He finished second behind Jonathan with Cooleys Rule of Law and then won first and second place in the Open Preliminary Championships with Unborn de Lelo and Call the Law, respectively.

Madeleine Schultz and Dudley Do Right led from the start to claim the Junior Training Rider Championships with Leah Elgart and Punch Line hot on their heels in second. Kristen Paysinger and Commander II took charge of the Senior Training Championships with a 24.6 dressage score, to which they added no additional penalties. Katie Bartz and her super pony As You Wish were second.

The Fernhills were out in force in the Training Horse Championships. Fernhill Jet placed second with Candace Bell while Fernhill Kilkenny won blue for Julie Richards.

Event Entries had not yet updated to reflect the final scores in the Novice or Beginner Novice Championships at the time of posting, but we do know our favorite grey mustang mare named Hwin had a brilliant finish in her first championships. 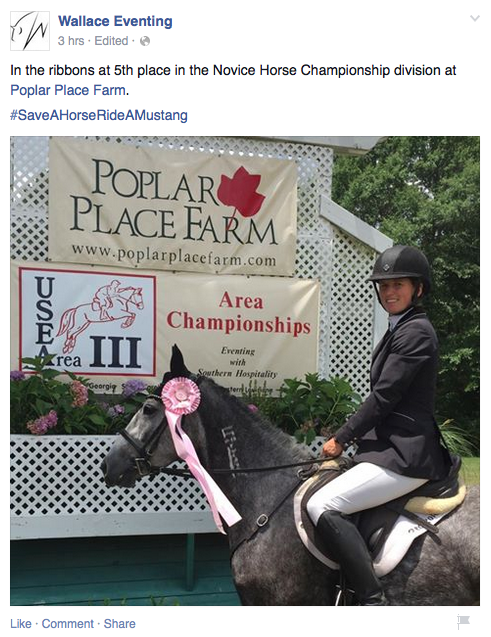 At the Colorado Horse Park Horse Trials, the 2014 USEA AEC Preliminary Amateur Champion Darlene McInnes and Warlord picked up a win in their first Intermediate horse trials. Amanda Hund and Pik Pilot finished less than two points behind them in second.

Show jumping proved to be the deciding factor in Open Preliminary, with not a single clear round produced out of nine pairs. Wendy Webb and T.H. Royal Flush, however, added just four faults to their score, which moved them up from fourth to win the class. Likewise, Summer Peterson and Jake the Fish moved up from fifth to finish second, and Hannah Slade and Kingfisher II moved all the way from seventh after dressage to claim third.

The IEA Horse Trials is a much beloved Area III event organized by the Indiana Eventing Association. Riders from Beginner Novice through Intermediate/Preliminary competed in the horse trials, and a total of 37 combinations rode in the long-format Training and Novice divisions.

Amanda Miller Atkins and Elizabeth Spencer’s Firewater won the Intermediate/Preliminary division, and the two Preliminary winners were Shannon Riley and No Pips and Kyleigh Christians and Honey Roasted.

For those of you who dream of riding in a long-format three-day event, the Classic Series is alive and well across the country. Completing a three-day takes months of dedicated endurance training, which requires a lot of time and a special relationship between horse and rider.

In the Training Three-Day, Conor Rollins led from the start with Company Target Hill Farm, LLC’s Edison T. They incurred no penalties in the endurance phases and 8 points in show jumping. Madison Nichter and her own Sterling Varvatos climbed steadily up the leaderboard from sixth to second. They were the only pair in the division to finish on their dressage score.

The Novice Three-Day had a whopping 26 entries, and it was Nancy Elberty and Princess B who came out on top, finishing on their dressage score of 33.1. Jayne Whitton and Mr Big made a big move up the leaderboard, going from tenth to second after two double-clear days of jumping. Ashley Johnson and Nellie Grey moved from 12th to third, and Brittany Weber and Lucky Sevens Trademark climbed from 13th to fourth. 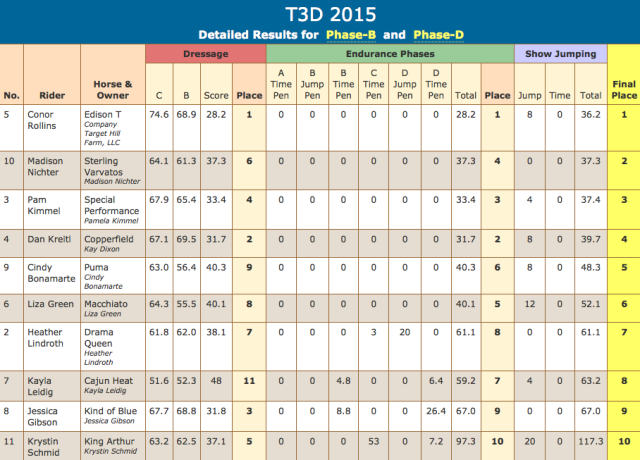 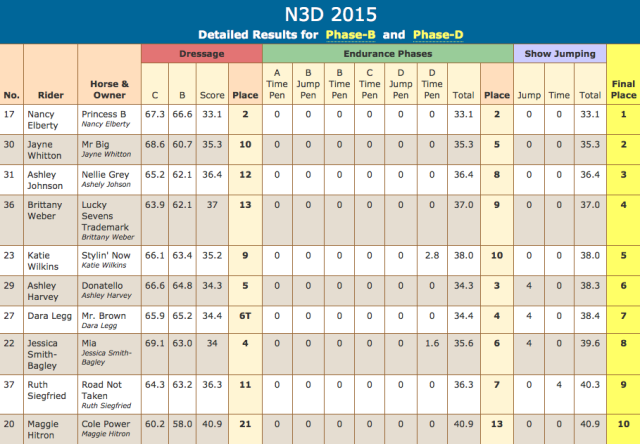 Finally, at the Waredaca Horse Trials in Maryland, Kurt Martin and DeLux Z won the competitive Open Intermediate division, adding only a few time penalties to their dressage score. Sarah Cousins and Guigase du Lac vaulted up the standings with a fast cross country round and one of only a few double-clear show jumping rounds. They moved from 13th to finish second. Australian import Lauren Balcomb and Guido Hatzis were leading after dressage, but two rails and a bit of time dropped them to third.

From Preliminary level on down to Beginner Novice, nearly every division was won on a dressage score in the 20s, many of them in the very low 20s. Sara Vitkus finished first and second in Novice Horse with a 22.4 (Z Esmerelda) and a 24.6 (Regalo). The lowest winning score came from Gaby Esquivel and Strictly Business, who led the Beginner Novice Rider-B division from the start on a 21.3.

Those are some impressive numbers folks! Congratulations to all competitors this weekend. Go Eventing. 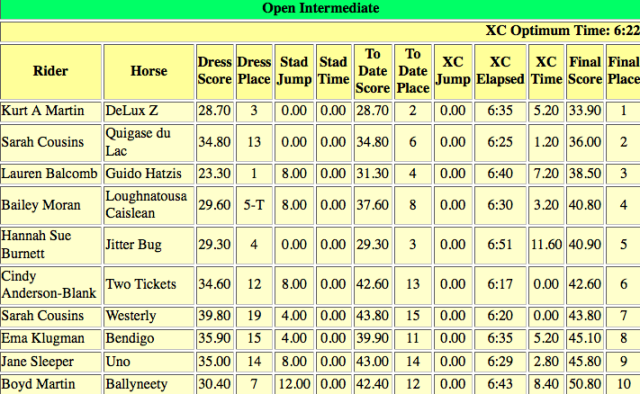